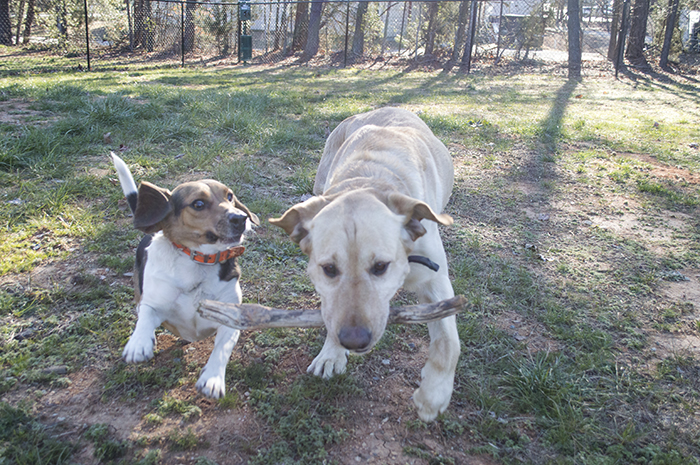 Labrador retriever Cobb, at right, and Brownie, a beagle, race around a new park at the Rowan Animal Clinic on Statesville Boulevard. Josh Bergeron / Salisbury Post

No leash? No problem.

A park at Rowan Animal Clinic is the first in the county that allows dogs to romp around without a leash.

Rowan Animal Clinic veterinarian Greg Lowe said the clinic will have a formal grand opening later this year, when temperatures warm up. For now, the park is open for use. Lowe said the new park adds value for customers of Rowan Animal Clinic, but would be open to members of the public every day from sunrise to sunset. Pet owners and dogs must abide by park rules posted at the entrance. Lowe said he’d expect all dogs playing in the park to be properly vaccinated.

The park and animal clinic are located at 4155 Statesville Boulevard, just west of Salisbury.

Leash laws require dogs in Rowan County’s and Salisbury’s public parks to be on leashes. Rowan Animal Clinic’s park, which is surrounded by a fence, won’t require animals to be restrained.

“All animals should be able to run, play and shouldn’t always be kept in a room,” he said. “Some families might not have a yard or live in an apartment, so hopefully this offers their dog a chance to be free.”

Another benefit Lowe mentioned was dogs being able to interact with one another. Pet owners who have one dog may not be able to expose their animal to others often, Lowe said.

The park’s name — Precious Nine Memorial Dog Park — comes from a tragic, 2012 fire that claimed the lives of nine dogs, which were staying at the animal clinic after having procedures.

“I just remember driving from Cleveland and I could see the smoke coming up when I was halfway there,” Lowe said. “I thought ‘there’s no way that could be our building.'”

In addition to claiming the lives of nine dogs, the fire destroyed Rowan Animal Clinic’s office. However, they committed to rebuilding. Lowe said the clinic received an outpouring of community support that made rebuilding possible.

Immediately after the incident, Rowan Animal Clinic opened in a nearby, temporary space and built a new office on a plot of land adjacent to the burn site. Precious Nine Memorial Dog Park sits where the original office once stood.

In addition to remembering the dogs lost in the fire, Lowe said he hopes the park improves the experience of visiting a veterinarian for dogs.