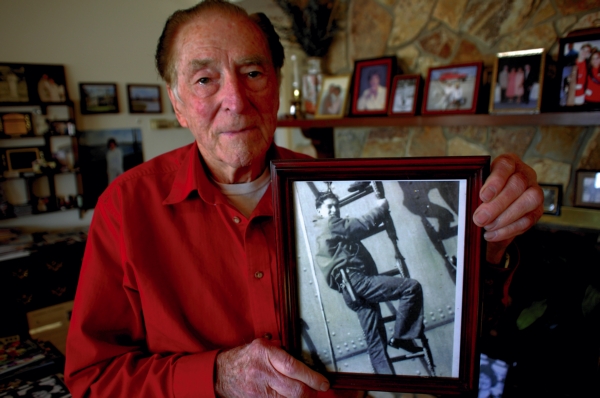 Mark Wineka/Salisbury Post Greer Goodman holds a photograph of himself climbing a ladder of the USS Storm King during his Navy days in World War II.

“We threw the chickens out and moved into it,” he says.

A picture of that tiny house hangs on the wall of his 5,000-square-foot home on High Rock Lake today. The lake house could pass for a museum because it holds every photograph, drawing, plaque, book, trophy, article and memento that means something to Goodman.

After 90 years, the stuff adds up. But it’s the dining room table that holds much of the information and pictures behind Goodman’s service in the Navy during World War II.

In all, Goodman participated in six major invasions during the Pacific island hopping of U.S forces against the Japanese. He earned the Bronze Star for his heroic actions during the Saipan invasion in June 1944, but Goodman will tell you today he and most other sailors just tried to do their duties, keep their heads down and make it back home.

Goodman thanks President Harry Truman to this day for dropping the two atomic bombs on Japan and bringing the war to an end. He’s sure he otherwise would have been part of the U.S. Naval forces destined to invade the shores of Japan and maybe among a million additional men who would have died before the fighting stopped.

Goodman wrote periodic entries in a journal, which he kept in his locker aboard the USS Storm King and the USS LST 1106. At the end, it reflects how Goodman felt when he was finally discharged from the Navy April 8, 1946.

After being drafted as a 18-year-old, Goodman reported to Fort Bragg, declared for the Navy and entered military service Nov. 4, 1943. His training took him to Little Creek, Va., Fort Pierce, Fla., and Portsmouth, Va.

By May 1, 1944, Goodman arrived at the naval base in Pearl Harbor, Hawaii, after his transport ship, the Storm King, had passed through the Panama Canal. Goodman recalls not even knowing where Pearl Harbor was less than three years earlier when the Japanese had made their infamous surprise attack.

By May 29, Goodman left Pearl Harbor for Saipan Island and his first fighting. He would be there nine days.

“D Day” at Saipan started June 15. Goodman was part of a four-man crew on a landing craft (LCVP) taking Marines ashore. The boat took a hit from an enemy mortar shell.

Smiley Rollins, who happened to be from Wadesboro, was wounded in the shoulder. On shore, Goodman took him to a medic, who gave Rollins morphine for the pain. Goodman was then able to get Rollins to another craft headed back to a ship for the wounded.

But Goodman missed his chance to get off the beach. He stayed with the Marines the rest of the day and night.

“I was the only Naval person on the beach that night,” Goodman said. “My wet blue uniform stood out like a sore thumb.”

Goodman was able to get off the beach and that harrowing environment the next day.

“I shall never forget the sight and smell of battle,” Goodman wrote. “The total devastation, wounded and dead Marines.”

Goodman remembers telling his Uncle Rufus back home to pay attention to what happened at Saipan, and he would know where Goodman was and what he was seeing. His family clipped out an Associated Press report printed in the Salisbury Post — Goodman still has it — which stated Japan had a total of 22,427 men killed or captured at Saipan.

During a Sept. 2, 1944, ceremony on the USS Storm King, Goodman received his Bronze Star “for heroic service as a member of a boat crew during the invasion of Saipan,” the citation said.

“Braving heavy hostile mortar and small-arms fire,” the citation continued, “Goodman voluntarily aided in the evacuation of wounded men from the beach to places of comparative safety and, by his unselfish concern for the welfare of others, undoubtedly saved the lives of men who otherwise would have perished.

“His courage and initiative were in keeping with the highest traditions of the United States Naval Service.”

Things would not let up for Goodman. Invasions of Angur Island; Layte and Luzon, both in the Philippines; Iwo Jima; and Okinawa would come before the war’s end.

At Angur Island, Goodman manned a landing craft (LCM) carrying men and equipment to the beach. He saw the bodies of Japanese soldiers floating in the water, and he recalls a Japanese sniper shooting at the landing craft from a tree.

“We cut loose with two-50-caliber machine guns mounted on the rear of our LCM and cut him to pieces,” Goodman said.

While Goodman’s ship was anchored off Layte, a Japanese plane passed overhead but missed with its bomb.

“Our gunnery officer, Lt. Tom from Salisbury, N.C., gave the order not to fire,” Goodman’s journal said. “I could not at the moment understand why we could not shoot, because we were itching to shoot the SOB.”

Goodman had his answer a few moments later when two P-38s roared in and shot the Japanese plane out of the sky.

On Jan. 8, 1945, Goodman watched as a Japanese kamikaze plane took a crash dive into the flagship of his convoy. The impact killed 19 crew members. Goodman was on watch that afternoon, and because his ship was third in the convoy, he could hear the announcement from the flagship to “keep silence about the deck while funeral services are being held.”

Goodman’s ship took on wounded Marines at Iwo Jima, the bloodiest single battle of the Pacific.

“That was one hell of a fight, to see all the wounded Marines on ship,” Goodman says. “I even helped wipe the blood off stretchers.”

Goodman survived Japan’s biggest kamikaze mission when the Japanese sent the largest warship ever built, the Yamato, on a suicide sortie meant to disrupt American landings at Okinawa.

Goodman recalls plenty of other war experiences, such as surviving a typhoon on June 5, 1945, seeing the spot on Ie Shema where famous war correspondent Ernie Pyle was killed by a Japanese sniper, taking liberty in Tokyo and Yokohama and receiving Christmas cookies from his mother.

The cookies didn’t catch up with his ship in the Philippines until his 19th birthday on July 13, 1945. By then the cookies were no good.

“I had to feed them to the fish,” Goodman says.

Growing up in western Rowan County, Goodman had hardly traveled anywhere before the war, except to the beach. During World War II, he figures he traveled some 130,000 miles on water.

After the war, Goodman returned to high school and graduated from China Grove. He also attended Salisbury Business College and married a girl from Kannapolis, Flo Starnes, in 1948.

“People told me there were a lot of girls down in Kannapolis,” Goodman says with a laugh, “and that’s where I wanted to go.”

The couple met on a hayride. Greer had started out the hayride with another girl but ended up with Flo by evening’s end.

By 1952, Greer and his father, E.M. Goodman, formed a partnership to build houses. Starting out, they each claimed $100 in assets. Greer later needed a $5,000 loan from a friend to get things going.

Over time, Goodman would build about a thousand homes in Rowan County and construct commercial buildings such as three KFC restaurants and jewelry stores, besides fire stations and the Rowan Rescue Squad building.

After he and Flo added a real estate business in 1973, Goodman would have his hand in selling thousands of more homes. The couple worked tirelessly and at times had up to 10 agents selling properties for them.

“I enjoyed the real estate business,” says Goodman, who built a two-story office at East Innes and South Long streets. “I feel we put a lot of people in homes and helped them as much as we could.”

Goodman stayed busy elsewhere. He was one of the earliest chiefs for Locke Fire Department. He was a two-time president of the local homebuilders association and a director in the state and national homebuilder organizations.

He served on the Salisbury Planning Board and became a member of the Lions Club, American Legion, Elks and Moose.

So many things for Goodman were self-taught, especially his skills at drawing house plans. He built several of his family’s homes, including the lake house in 1984. As late as 2005, he drew the house plans for a home just a couple of doors away.

Goodman’s late son, Neel, was an accomplished horseman as a young man, and Greer and Flo traveled to all his riding competitions in their Winnebago. Neely won more than 500 first places in his riding days and would later work in the family construction business.

“We have had a full life, we sure have,” Goodman says, walking amid all his keepsakes.

Goodman still attends Lions Club meetings every week, works at his nearby shop, rides his vintage tractor, keeps thing clean with his bush hog and and cuts wood for the winter.

After such a long time, the war years fade, but Goodman can’t shake the memory of that night on the beach with the Marines at Saipan. He recalls carrying a badly wounded Marine, whose head was bobbing off the front of the stretcher.

Goodman made sure to keep one hand on his head and the other on the stretcher as they took him toward a LST.

“Today, I still wonder, did he live or did he die?” Goodman says. “That can only be known by God.”

In fact, Goodman’s living room contains all kinds of pictures

as does a picture of the first home he built for himself on Rowan Mills Road.

“I built that myself,” he said.