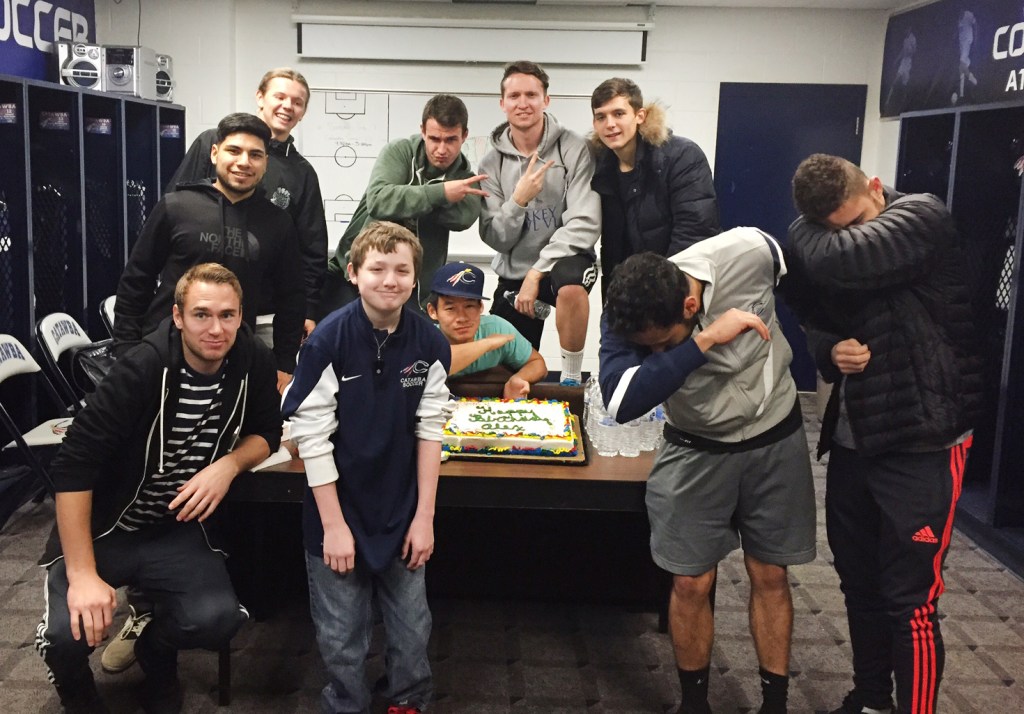 Alex poses with members of the Catawba Men's Soccer team after the group surprised him with an early birthday party. Submitted

SALISBURY — It’s not every day a 13 year-old asks for a blood drive for their birthday. But that’s what Alex Yates told his parents he wanted when he turns 14 on Feb. 20.

The drive, which will be held Monday, Feb. 15 at Peeler Crystal Lounge at Catawba College, is a collaboration with Alex, the Community Blood Center of the Carolinas and the Catawba men’s soccer team.

Alex has been an honorary member of the soccer team since the beginning of last season, and the players have become like family.

“He’s sort of become a little brother for a lot of the team,” Coach Ken Hasseler said.

Alex said he’s an honorary team member and “unofficial mascot” for the men’s soccer team. But to the Hassler and the rest of the team, he’s brought so much more.

“You see a change in the players when somebody younger comes around,” Hassler said. “A change in a very good way, and Alex has brought that gift to the team.”

To the team, Alex is their teammate and No. 1 fan.

“He’s always been there for us, every game he’d always be there, cheering on the sideline and now this blood drive gives us the opportunity to be there for him,” team member Ian Orr said.

Alex met the Catawba Men’s Soccer team through Team Impact, an organization that connects kids with chronic or life-threatening illnesses with local college sports teams. Mother Leanne Yates said the soccer team volunteered to take on Alex. Yates said that the players talk to Alex about bullying, girls and other topics, and give him a way to socialize outside the home.

When asked if he likes soccer, Alex wiggles his hand non-committedly, but said he’d like to be a goalie.

But he loves being part of the team. Over the past season, Alex has been there for practices and games. The team said that if there was a home game, Alex would be there, in the rain or cold, cheering them on.

“A lot of games towards the end of the season were cold, and it didn’t matter if it was raining or whatever, he was always there, he didn’t have to come . . . he always came and supported us,” team member Bobby Cardelle said.

The team said Alex was “pale and quiet” when they first met him, but he quickly opened up, revealing a smiling, intelligent boy with a sharp sense of humor.

But when Alex asked for a blood drive for his 14th birthday, Yates said she was at a bit of a loss. At first, she thought someone in the family could donate blood in Alex’s name and take a photo.

“And then it went further than that,” she said.

Yates had a friend ask about hosting a blood drive on Facebook, and the Community Blood Center of the Carolinas stepped in.

“They asked, ‘Are you involved in any church or anything outside the home?’” she said.

Yates said no, Alex wasn’t, but then she remembered the team. Half an hour later, Hassler said, the team was on board. They’ve spent the last few days canvassing the area, handing out fliers and spreading the word. They want the drive, which will also function as a birthday party for Alex, to be as big a hit as possible.

“I think it’s pretty amazing that he’s only 14 years old and he wants to put together something that would help so many people,” team member Jared Beiber said.

But Alex understands why blood donations are necessary. Alex has primary ciliary dyskinesia and common variable immune deficiency and once a week he receives an infusion in his west Rowan home. The medicine that keeps him healthy is made from plasma and other blood products.

Bianca Tilling, the RN who administers Alex’s infusion, said it takes 30 plasma donors to make a single dose of medicine.

Alex said he wanted to do the blood drive because he’s realized how important it is to his health and the health of others.

“It can help other people, too,” he said.

Many members of the Catawba Men’s Soccer team are international students, and aren’t able to give blood here, but they plan on encouraging as many people as possible to attend.

“I think it’s a great opportunity for us to give back everything he’s given for us,” team member Kennedy Little said.

Yates said that Alex has since asked for a cellphone, so that he can talk to and text the team directly.

Alex’s father said he plans on donating Monday, and those who are able to on the team plan to, as well. Team members said that every time they hang out with Alex, they have a different perspective on life.

“They’re sort of looking at a bigger world in those moments that Alex is with us,” Hassler said.