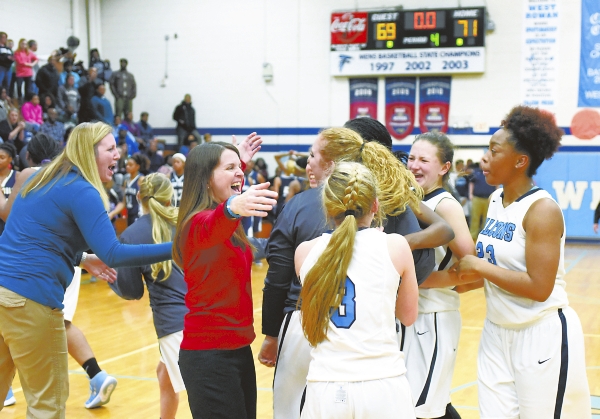 MOUNT ULLA — West Rowan’s girls basketball team ran the table in conference play for the third time in school history on Friday — and did it the hard way.
The Falcons spotted second-place finisher Hickory Ridge a 17-point, second-quarter lead, but they came back to win, 71-69, over the Ragin’ Bulls. The Falcons went 18-0 in the South Piedmont Conference. They went 14-0 in their two previous perfect league seasons in 1997 and 2005.
“It’s hard to believe we went 18-0,” senior star Khaila Hall said. “I didn’t know we could do something like that when this season started, but I did know we had a team that was going to show up and play.”
The Falcons saved their best game of the season for a senior night that honored, among others, starters Hall, Taylor Martin and Shanice Miller. The game between two top-10 3A teams was played in front of a monster crowd, almost half of them supporters of Hickory Ridge.
Hickory Ridge (20-3, 16-2) is much taller than West, and the Falcons spent so much time worrying about post player Gabby Smith that guards Laura McManimen (21 points) and Stacia Means (15) took turns killing them.
Hickory Ridge led 17-14 after a quarter and threatened to blow the Falcons out in the second quarter with a ferocious 17-3 run. When McManimen hit a 3-pointer with 2:15 left in the third quarter, the Ragin’ Bulls led 34-17.
“We called timeout, and I told the girls that this game was still ours if we wanted it badly enough,” West coach Ashley Poole said. “They believed in themselves and they fought. When they fight like that, we’re tough to beat. We scored whenever we had to.”
Hall’s driving and-one slowed the Bulls down, Mary Sobataka hit a 3-pointer, and then Egypt Alexander produced a three-point play late in the half. West got to halftime down 38-31 and took a breath.
The Falcons (22-2, 18-0) exploded to open the second half. Miller got a layup, Sobataka scored, and then Hall fired an unbelievable pass to Miller for another layup. When Martin fed Alexander, who scored 22 points, for a layup, the Falcons led 39-38, and the Bulls were calling timeout.
“Hickory Ridge is really strong, a great team,” Hall said. “But it was Senior Night and we played the best game we’ve played in a long time. We helped each other. We executed. We never stopped fighting, and I’m just really proud of my team right now.”
West went ahead by nine points late in the third quarter. Jaira Shears hit a 3-pointer for the Bulls that sliced the Falcons’ lead to 56-50 heading to the final eight minutes.
Foul trouble became a factor for the Falcons. Martin had gotten her fourth personal late in the third quarter on a case of mistaken identity. A whistle was blown when Sobataka tried for a block, and Martin, who was standing innocently 15 feet away, was tagged with the foul.
After Hall’s fourth foul was whistled a minute into the final period, the Falcons were just trying to find a way to hang on.
Martin sat for a while, but her calm 3-pointer with 1:45 remaining gave the Falcons a 68-64 lead.
McManimen’s layup with a minute left cut the Falcons’ lead to 68-66.
Then the teams traded frenzied, hasty turnovers. With 33 seconds left, Miller appeared to have a layup, but McManimen appeared out of nowhere and blocked the shot. Smith made a free throw with 32 seconds left to cut the Falcons’ lead to 68-67.
After Hall missed a free throw, a driving Means dished to Smith for a layup, and the Bulls led 69-68.
Trapped by two Bulls in the backcourt, Hall was fortunate to get a foul call with 15 seconds left. She made her first free throw for a 69-all tie. She missed the second, but Miller chased down the long rebound, extending the Falcons’ most critical possession.
“It came down to a couple of non-boxouts for us,” Hickory Ridge coach Tolanda Simmons said. “We knew rebounding was going to be the difference.”
West inbounded the ball with 13 seconds left. Sobataka missed a jumper from the right side, but Alexander rebounded in the lane. Miller, crashing from the weak-side, boarded Alexander’s miss and was fouled as she tried to go up.
“I really wanted this game and I knew I had to do something,” Miller said. “I was just hoping and praying I could make a free throw.”
With 2.3 seconds left, Miller went to the foul line. She rattled in her first attempt — maybe the prayer helped — for a 70-69 lead. That was the point that proved decisive.
After Hickory Ridge turned the ball over, Miller went back to the line with 1.4 seconds and made another free throw. Hickory Ridge then threw the ball to mid-court where Miller intercepted, and the Falcons and their fans celebrated.
“We made a lot of hustle plays,” Poole said. “I think it was mostly just refusing to lose on our Senior Night. We haven’t lost a home game and we didn’t want to lose this one.”
For the Bulls, the immediate goal is to get another shot at West in the SPC tournament championship game. It’s likely to happen. Both teams should be a factor in the playoffs. Hickory Ridge is a talented team that’s beaten strong 4As such as Hickory Ridge and Hough.
“It was their Senior Night and we knew we’d get West’s best effort,” Simmons said quietly. “We didn’t make the right decisions tonight, but I was proud of our effort. It’s a very tough loss. There’s nothing we can do now but learn from it.”