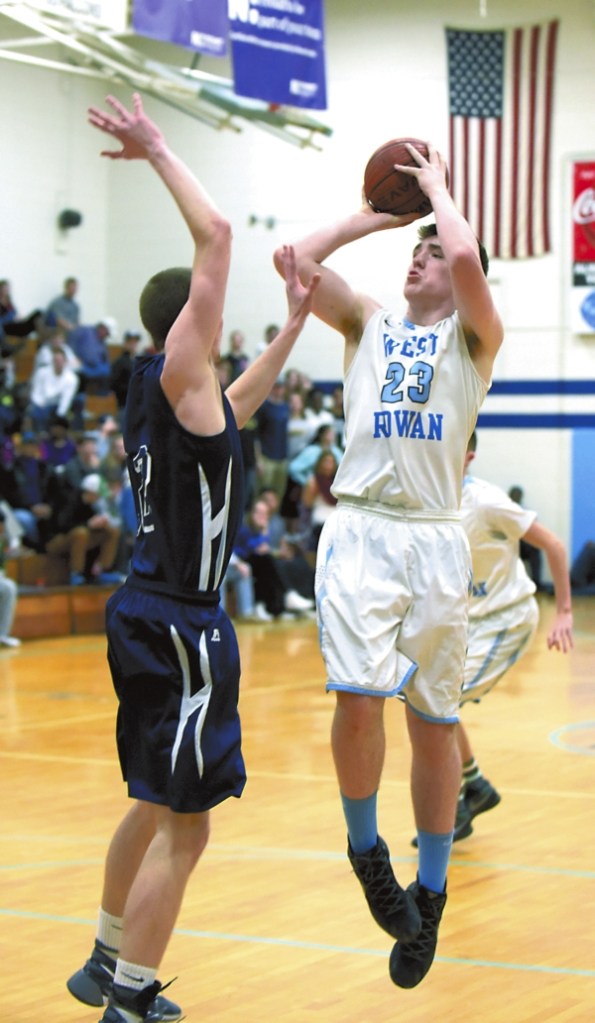 MOUNT ULLA — Sure, it was senior night, but West Rowan’s youth was evident again on Friday in a 64-55 South Piedmont Conference loss to Hickory Ridge’s boys.
Coach Mike Gurley was able to joke about it. When youngster Cole Myers burst into the game prematurely before waiting for the horn to sound at the scorer’s table, Gurley cheerfully told the nearest official, “Hey, he’s still got his permit.”
Hickory Ridge, on the other hand, has guys with drivers’ licenses, and the Bulls were the more mature team in the fourth quarter when the game was decided.
Leading only 41-40 heading to crunch-time, fourth-place Hickory Ridge (17-6, 13-5) quickly pushed to a 13-point lead behind the Metcalf brothers, Avery and Andrew. That settled the outcome.
The Metcalfs combined for 39 points, with Avery getting 24.
“It was one of those games where the standings were not going to change, but we knew we’d get a big effort from West on Senior Night,” HR coach Robert Machado said. “They wanted to win this game for pride and they wanted to win it for Coach Gurley.”
As has been the case often, West dug a hole early. But this time the Falcons were able to climb out of it with six first-half 3-pointers. Martavio Rankin and Jayson Delgado made two long ones each, and the Falcons trailed 34-29 at halftime.
“We jumped off early, but sometimes that gives you a false confidence,” Machado said.
Playing a packed-in zone defense, the Falcons limited Hickory Ridge to seven points in the third quarter. When Caleb Mauldin scored inside, the Falcons held a 40-37 lead, but the Ragin’ Bulls scored the last four points of the quarter.
“We’ve had good effort 23 out of 24 games,” Gurley said. “We played hard again, but we made a lot of self-induced mistakes early. Then we crawled back and took the lead. Then turnovers bit us in the fourth quarter.”
Hickory Ridge held Mauldin to 17 points, but Machado wouldn’t mind working out a trade for him.
“He’s a special sophomore,” Machado said. “He can score with either hand, and he’s just a killer young player. We finally went to a 1-3-1 zone to try to cut off their entry passes to Mauldin from the wing and the corner. Hey, give us Mauldin and we could play with anyone in the state.”
Machado, who had led his team to four straight wins, was also impressed with the hustle of blue-collar junior Austin Love, who produced a number of stick-backs against the Ragin’ Bulls.
Gurley has had to rely on Mauldin to get 25 points a night all season. When he has an off night like Friday and scores “only” 17, the Falcons (7-17 5-13) don’t have much of a chance against a good team.
Caleb is 6-foot-7 and 225 pounds, but he’s also 15 years old,” Gurley said. “We’ve had to ask a lot of him.”
There was a nice moment late in the game when Gurley took out his only senior, Daniel Day, to a round of applause. West committed a foul to stop the clock so Day could exit. Machado understood the gesture, and he and Gurley nodded at one another.