Neighborhood works to save neglected houses 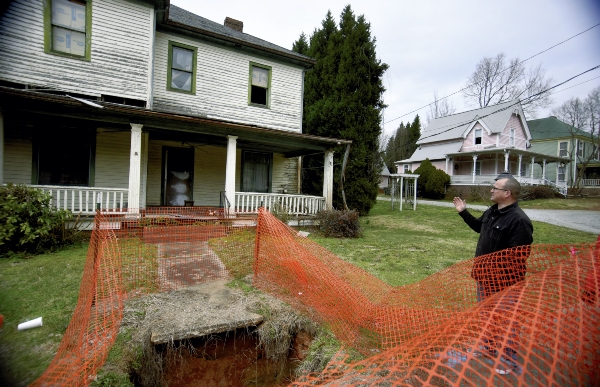 JON C. LAKEY / SALISBURY POST Glen Upp, president of the Old North Salisbury Association Incorporated, points out houses located along North Main Street in Salisbury where many homes owned by landlords that are vacant are in danger of becoming financially irreparable. Upp and the owner of this house which has a large sinkhole from a water main break are planning on spending sometime making improvements to the home. Friday, February 12, 2016, in Salisbury, N.C.

Upp said he still has a ways to go with repairs to the house. There are other historic houses like Upp’s in the neighborhood that are being repaired or are already in good condition. Some are painted with bold colors, have furniture-cladded front porches and long, white columns.

But not every house looks like those houses. Some have boarded up windows, chipped paint and bent porches. It is those houses that Upp and the neighborhood association are working to save.

The Old North Salisbury Association, Inc., the neighborhood association for the North Main Historic District, is working to stop houses from being demolished because of neglect and keep the neighborhood’s homes a proper reflection of the history they represent.

A property owner of a house that faced demolition in the North Main Historic District went before the Salisbury Historic Preservation Commission late last year. The property at 918 N. Main St. was significantly deteriorated because of a fire in 2006 and had not been repaired much since then.

City staff member Catherine Garner said there were holes in the roof, the windows of the house were boarded up and there was damage to the foundation.

The house was already slated for demolition; the commission could only delay the demolition, which they decided to do for 365 days.

During the meeting, many neighbors who spoke during the public hearing said they did not want the house to be demolished, but it was too far gone to save.

Earlier this week, Cherie Turner, a member of the neighborhood association, said no one wants to see a piece of history torn down.

Before that house, there was a service station that was also damaged by a fire that was demolished. The neighborhood now uses the empty spot as an overflow parking lot.

Glen Upp, president of the neighborhood association and resident since 2008, said there are absentee owners who allow houses to deteriorate. Sometimes the houses are rented out and other times they are just left empty. Some families who move away do not want to sell their family home, but they are not present to fix any repairs the house may need over the years, Upp said.

In addition, Turner said when repairs are made, they are not always up to code or historic guidelines. For other houses, Turner said they are “literally falling apart.”

Turner said the association’s membership has waned over the years, but they are working on building their numbers back up.

She said she hopes the association can not only work on revitalizing the neighborhood, but also be a social vehicle for neighbors to meet each other.

The neighborhood association can also be a resource for neighbors who may be looking for someone to help them with repairs and maintenance.

Turner and Upp both said the city has been responsive to the problems they have reported. The association has also been working with the Historic Salisbury Foundation to fix up houses.

Turner said the Historic Salisbury Foundation has stabilized three houses in the neighborhood.

Not all renters and landlords are unresponsive. Upp said one owner of an empty house plans to come to Salisbury some time in the spring and work with him to do some repairs to the house. And there are many people who live in the neighborhood who are making repairs all the time.

“The people who own (houses) here and live here are investing in fixing up their homes,” Upp said.

“One thing we talked about was if there was an elderly person down the street that maybe needs some landscaping done or they need their front porch painted … maybe we could find the materials and go buy something and go down as a group and make the repairs,” she said.

Turner said keeping houses in good repair is important to the neighborhood because no one wants to move into a house that is next to one that isn’t in good shape.

It brings down the whole neighborhood, she said.

Upp said he tries to reach out to absentee landlords and offers any help that he can. He does the same for others in the neighborhood.

Upp said many of the houses can be repaired; all that is needed is time and money — two resources that are hard to come by these days.

There are many beautiful homes in the North Main District. One was even featured in last year’s Historic Salisbury Foundation OctoberTour.

But there is only so much one can do for houses going into disrepair when landlords and property owners are unresponsive and live in different states. Houses that end up getting demolished because of neglect is something this neighborhood, and others in Salisbury, have to work against.

“We’re working to save houses, not destroy them,” Upp said.