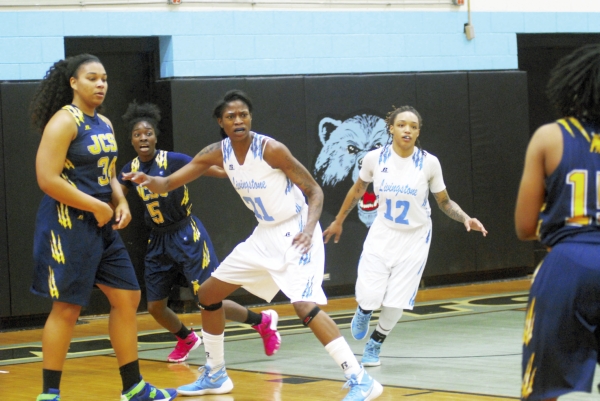 Dennis Davidson/Salisbury Post... Livingstone center Wende Foster (21) and guard Amber Curtis (12) position themselves on defense against J.C. Smith here Saturday at New Trent Gym. It was a disapointing last home game for Foster and Curtis, both seniors, as the Golden Bulls won, 85-77.

SALISBURY — Livingstone fought back to tie Saturday’s game against J.C. Smith in the final minute of regulation, but could not match the Golden Bulls’ energy in overtime.

The Bulls’ ruined senior day for Livingstone by going inside to 6-3 post player Ashley Porter, who scored seven points early in the extra period, and the visitors led the rest of the way.

“Our inside players (Porter and 6-2 Amena Brent, both seniors) are really the heart and soul of our team,” said J.C. Smith coach Stephen Joyner Jr. “I was actually surprised that we were able to score some without them early on, so I’m very please with what they did in overtime.”

In addition to the emotions of senior day, Livingstone also played with heavy hearts, due to the death of a well-known student on Friday night. Ayonna Tellis was killed in a car accident on her way home to Fayetteville.

“Not taking anything away from J.C. Smith, because it earned the win, but it was a tough game for our girls today,” said Livingstone coach Anita Howard. “The death of one of their friends … I don’t think they could ever really shake it off and totally focus today.

“It kind of showed today that we just didn’t have the kind of fight that we’re used to from this group,” continued Howard. “J.C. Smith came out ready to play and we had trouble matching their intensity for a lot of the game.”

The Bulls (14-10, 7-6) came to life first in the third period, behind the shooting of true freshman A’Diyah Ussery. The 5-9 guard scored 10 of her game-high 22 points in the first half of the third period, staking J.C. Smith to a comfortable eight-point lead.

Livingstone tried to battle back but its own turnovers (15 in the second half, 24 for the game) hurt the effort. By the 4:24 mark of the fourth quarter, the Bulls had a 66-57 advantage when Asha Jordan buried a 3-pointer.

However, senior guard Amber Curtis, playing her final game on the home court, took command leaving a timeout huddle and pleaded with her teammates to fight.

“I had to keep them motivated,” Curtis would say later and it worked — at least for the rest of regulation.

The teams traded baskets down the stretch before Livingstone called timeout with 36 seconds left, with the ball, but down 70-67. Three seconds later, Taylor came of the timeout with a clutch 3-point bomb from right in front of her bench to knot the score at 33.2.

“The plan was to get any of our shooters open,” said Taylor, who 18 points on the day. “I just happened to be the one who broke open first and it was a free shot, so I took it. I was confident that I could make it and I believed in myself that I would make it.”

The Blue Bears then had a chance to win in regulation when the Bulls’ Krista White missed two free throws with five seconds left. Ariana De’Jesus grabbed the rebound and Howard called another timeout at the 4-second mark.

On the next inbounds play, De’Jesus streaked for the basket, racing the clock, and appeared to be going in for a game-winning layup. However, a J.C. Smith defender stripped De’Jesus going up and the ball went out of bounds.

Livingstone controlled the tip-off in overtime but immediately had a back-court violation. That was an bad omen, as the Bulls controlled the extra period.

“We were just not focused in overtime,” said Howard. “We were again over-passing. I wanted the team to attack more. Smith runs a zone defense and I told the ladies that it fool’s gold, that we should be attacking rather than jacking up threes. It was a tough loss.”

Joyner was relieved and happy with the victory.

“Anytime you can come up here to Livingstone and get a win, it’s a good win … I don’t care how you do it,” said Joyner. “It’s such a tough place to play, a great environment. The crowd is always into it and you’re going against great coaches and players.”

Joyner had special praise for Curtis, who matched Taylor’s team-high total of 18 points and led the team with 11 rebounds.

“She is one of the most talented kids in the conference,” Joyner said of Curtis. “She can shoot the ball, pass it and is a very witty kid, too … mentally, she knows how to do some things on the defensive end. She’s part of a talented ball club and we’re fortunate to come out of here with a win.”

De’Jesus followed Curtis and Taylor with 15 points for the Blue Bears. After Ussery for the Bulls, White followed with 13 points and Jordan finished with 12.

Livingstone travels next week to conclude the regular season, with games at St. Augustine’s (Wednesday) and Winston-Salem State (Saturday).

Notes: There was a moment of silence in memory of Tellis prior to the national anthem … J.C. Smith made more free throws (33) than Livingstone attempted (25) … one of the three game officials suffered a cut above his eye in the first half and left the game to be treated. He did return to finish the game.