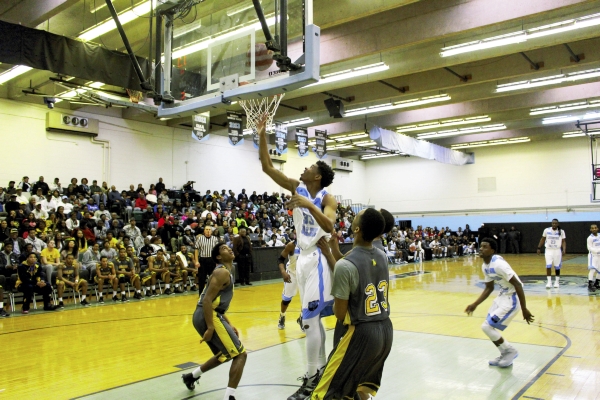 SALISBURY — Livingstone’s men’s basketball team has learned so much from its mistakes this season that it decided to make a few more Saturday night.

Only this time, the Blue Bears were rewarded with an exhilarating 88-82 CIAA victory over visiting Johnson C. Smith.

“It’s a matter of understanding the finality of the situation,” coach James Stinson said at New Trent Gym, where the two-time defending league champion prevailed in its last home game. “No one wants this to end. No one wants to be the team that did not win the CIAA.”

Livingstone (11-15, 6-8) faces a difficult post-season challenge, much as it did against Smith. The Blue Bears seem to rush to their shots in the second half and gave away all but one of a 21-point lead in the final nine minutes. By game’s end, they didn’t look like a championship team, but they looked markedly better.

“We were missing wide open shots, missing tip-ins, missing plays we should have made,” sophomore Jimmy Wilson said. “We gave up that big run. But we never stopped believing and we made our own run at the end when it mattered.”

Wilson led a parade of five Livingstone scorers in double figures. The 6-foot-5 forward shot 9-for-12 from the field, grabbed 10 rebounds and netted a career-high 20 points.

“He had eight offensive rebounds,” teammate Nasir Austin said after contributing 13 points, 14 rebounds and two blocks. “But Jimmy’s had some big rebounding games for us. It’s nothing new.”

“It was a tale of two halves,” said J.C. Smith coach Stephen Joyner Sr. “We’re glad we were able to make some mental and physical adjustments in the second half.”

The Golden Bulls had to. They trailed by five points at halftime and by 53-43 after Eric Dubose completed a three-point play four minutes into the second half. Following a couple of JCSU free throws, Wilson — who averages a modest 6.5 points and 4.5 rebounds per game as a reserve swingman — made consecutive baskets to boost Livingstone’s lead to 12.

“Sometimes you just know when it’s your night,” said Wilson. “It was my night. I feel like the team’s garbage man. If there’s an offensive rebound or defensive rebound, I’ve got to fight for it.”

Stinson, who returned from a brief illness, obliged Wilson with 27 minutes of playing time. “He’s taken advantage of the minutes he’s gotten,” the coach said. “He stays in the framework of the offense. You’ve got to remember he’s a 3.9 student. The stability he brings to us is great.”

Livingstone rode the momentum of Ty Newman (20 points) and Daryl Trynham (12 assists) to a 74-53 lead with 8:58 to play, forcing Smith into a series of timeouts.

“Our whole approach to the game was wrong,” Joyner said. “We weren’t defending like I wanted to defend and Livingstone was doing whatever they wanted.”

That’s when the visitors did an abrupt about-face. They held the Blue Bears scoreless for more than five-and-a-half minutes and went on a 16-0 run, trimming their deficit to five points with 4:22 to play. It got as close as 81-80 before Austin hit a short, fadeaway jumper from the left baseline with less than a minute to go.

“I grabbed my own rebound,” he said. “And I was really trying to get it back and convert a shot.”

Livingstone iced the win by converting five of six free throws in the final 21 seconds. It was an almost therapeutic triumph for Blue Bears, who have lost 10 games by nine points or less this season.

“It turns the table and shows them how it feels to be on that other side,” Stinson said. “More importantly, it shows them that when you listen and execute — two things we haven’t been good at — they’ll be fine.”