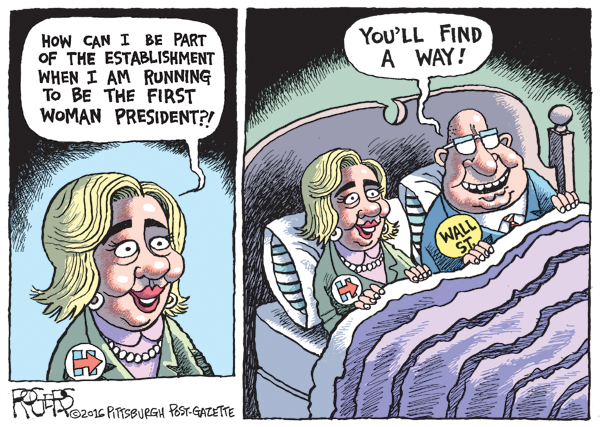 Millennial women shouted their views with their votes in New Hampshire, where almost 80 percent of them went for Bernie Sanders.

The primary followed a flurry of stories about outraged young women claiming Madeleine Albright and Gloria Steinem had tried to “shame” them into voting for Hillary Clinton. Why, they demanded, should we vote for a woman simply because she is a woman?

The answer: Women in public office expand the rights and enhance the welfare of women and girls in this country and around the world.

These young women might still be looking at job listings labeled with “male” and “female” had it not been for the canny work of two women to insert the word “sex” into the employment section of the 1964 Civil Rights bill outlawing discrimination against race. Democrat Martha Griffiths in the House and Republican Margaret Chase Smith in the Senate managed to outwit their colleagues in order to make it forever illegal to say: “We don’t hire women.”

Many of these young women probably participated in team sports, or even went to college on athletic scholarships, thanks to Title IX — the provision ending sex discrimination in higher education. They can be grateful to Rep. Edith Green for that, and to other congresswomen for suffering the wrath of male athletic directors. Rep. Pat Schroeder remembers a Denver high school coach directing his boys to “show her what they thought of the law.” The whole team turned around and mooned her.

Fighting for women is not for the faint of heart.

All of the women in Congress, current and former, can tell stories of the difference they’ve made simply because they were in the room. Rep. Susan Molinari of New York sat somewhat slack-jawed in the 1990s, listening to her colleagues in the Republican leadership argue that they didn’t want to spend money on the Violence Against Women Act. When she explained that they would look like they were protecting wife-beaters, they saw the light and passed the bill.

Women in Congress come together across party lines over and over again, year in and year out, to fight for their sisters and their children. If these young voters ever want a leave from work to take care of a baby or another family member, they can thank a bipartisan sisterhood that pushed relentlessly for passage of the Family and Medical Leave Act.

“We agreed that if we didn’t drive these kinds of issues, who would?” recalls Maine Republican Olympia Snowe in her memoir. She concludes, “the Congressional Caucus for Women’s Issues made the lives of millions of women better in large and small ways.”

The same can be said of the women who have served as secretary of state. When Madeleine Albright took the job as the first female in that exalted position, she put into practice her long-preached exhortation: “There’s a special place in hell for women who don’t help other women.” For the first time, the concerns of the other half of the human race rose to the forefront of foreign policy as U.S. embassies and consulates around the world were directed to promote programs to advance the status of women.

Condoleezza Rice kept the drumbeat pounding: She not only spoke forcefully for women’s rights at international conferences, but also prodded the U.N. Security Council to recognize rape as a war crime and pried money out of the administration to battle sex slavery. The health campaigns and rape centers she helped set up still benefit women in the Middle East and Africa.

When Hillary Clinton moved to Foggy Bottom, she established the International Fund for Women and Girls to make sure that organizations promoting microfinancing or combatting violence against women would have some money to work with. And she elevated the Office of Global Women’s Issues so it reports directly to the secretary, sending a signal both to the world at large and to the bureaucrats in the building that these would be lead agenda items.

That’s what women in office do: They move matters that benefit women and families to the top of the pile. It’s not that men don’t care about those issues, it’s just that they don’t place as high a priority on them. That’s what many of these young women voters need to know.

Hillary Clinton may not be the candidate they choose for all kinds of reasons. But to denounce the idea of voting for a woman just because she’s a woman reveals profound ignorance. Any woman who’s ever been in office could tell them that.