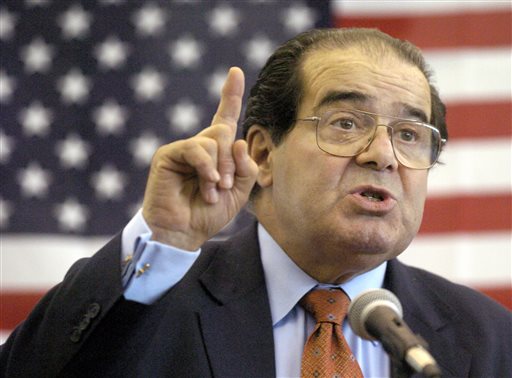 Supreme Court Justice Antonin Scalia, the fiery conservative who used a sharp intellect, barbed wit and a zeal for verbal combat to fight against the tide of modern liberalism, has died. He was 79.

Scalia died while on a hunting trip in Texas, according to a statement issued Saturday by Texas Gov. Greg Abbott.

Scalia was a dominant figure at the court from the day he arrived, and he could be an intimidating presence for lawyers who had to argue there. He had a deep effect on the law and legal thinking through his Supreme Court opinions and speeches. His sharply worded dissents and caustic attacks on liberal notions were quoted widely, and they had an influence on a generation of young conservatives.

But inside the court, his rigid style of conservatism and derisive jabs directed at his colleagues limited his effectiveness. Scalia himself seemed to relish the role of the angry dissenter.

As a justice, he was the leading advocate for interpreting the Constitution by its original words and meaning, and not in line with contemporary thinking. He said he liked a “dead Constitution,” not a “living” one that evolves with the times.

Laws can change when voters call for changes, he said, but the Constitution itself should not change through the rulings of judges.

As Scalia saw it, the difficult constitutional questions of recent decades were easy to resolve if viewed through the prism of the late 18th century when the Constitution was written.

“The death penalty? Give me a break. It’s easy. Abortion? Absolutely easy. Nobody ever thought the Constitution prevented restrictions on abortion. Homosexual sodomy? Come on. For 200 years, it was criminal in every state,” Scalia told the American Enterprise Institute in 2012.

If such comments made him sound old, grumpy and out of touch with modern America, Scalia would agree and consider it a compliment. He said his job was to preserve an “enduring” Constitution.

He also had a comic’s sense of timing. Several law professors studied the transcripts of the court’s oral arguments and confirmed what a court observer would see every day. Scalia’s sarcastic questions and his cut-to-the point comments provoked laughter in the courtroom far more often than any of his colleagues.

In October 2011, Chief Justice John G. Roberts Jr., a former lawyer before the court, marked the 25th anniversary of Scalia’s arrival by saying “the place hasn’t been the same since.”

Before Scalia was named to the Supreme Court in 1986, most of its justices shared the view that the Constitution was a progressive document which promised justice and equality for all. They had interpreted it in the 1960s and 1970s as giving women equal rights _ including a right to abortion _ as forbidding official prayers in public schools, as requiring police to warn criminal suspects of their rights, and for a time, blocking the death penalty as cruel and unusual punishment.

Scalia thought none of these decisions was correct. He said those rulings reflected liberal politics more than a faithful reading of the original Constitution. And he voiced his critique year after year, sometimes in angry dissents and sometimes in sarcastic comments directed at his liberal colleagues.

His tone was mournful at times. “Day by day, case by case, (the court) is designing a Constitution for a country that I do not recognize,” he wrote in a 1996 dissent.

He issued thunderous dissents when the court upheld the right to abortion in 1992. and in 2003 when it struck down the sex laws that targeted gays and lesbians. Then, he accused his colleagues of having “largely signed on to the so-called homosexual agenda … directed at eliminating the moral opprobrium that has traditionally attached to homosexual conduct.”

He predicted the ruling would trigger a national debate over same-sex marriage, and he was right. A few months later, the Massachusetts Supreme Judicial Court became the first to rule that gays and lesbians had an equal right to marry.

A decade later, a majority of Americans agreed thatgays deserved the right to marry.

During his first two decades on the court, Scalia was known mostly for his dissents. He broke with fellow Reagan appointees — Justices Sandra Day O’Connor and Anthony Kennedy — because they refused to overturn the court’s precedents on abortion, school prayer and the Miranda warnings to criminal defendants about their legal rights.

But after Chief Justice William Rehnquist died in 2005 and O’Connor retired a few months later, Scalia took on a new prominence as a leader of the court’s conservative wing. Roberts, the new chief justice who was a generation younger than Scalia, deferred to him and often assigned him to write the court’s opinion in momentous cases.

In what may have been his most important majority opinion, Scalia spoke for the court in 2008 declaring for the first time that the Second Amendment gave Americans a right to own a gun for self-defense. A lifelong hunter, Scalia said the “right to bear arms” had been understood as a fundamental right since the American colonies became independent.

Scalia also played a key role in a series of 5-4 decisions that struck down campaign finance laws and said that all Americans — including corporations and unions —   had a free-speech right to spend their money on election ads.

Scalia was an old-school traditionalist. He was fiercely determined to fight a rear-guard battle against modern trends. A Catholic, he and his wife Maureen had nine children, and he insisted they go each Sunday to a church with a traditional Latin Mass. On Saturdays, however, Scalia like nothing better than hiding in a duck blind waiting for unwary birds to fly overhead.

Scalia was born in Trenton, N.J., on March 11, 1936, the only child of a Sicilian immigrant who became a professor of Romance language at Brooklyn College and a mother who taught elementary school. He was known as “Nino” at home, and he carried the nickname throughout his life.

His family moved to the Queens borough of New York when he was a child. A star student, Scalia won a scholarship to a Jesuit-run military academy in Manhattan, and he recalled for the justices his high school days riding the New York subway carrying a rifle for drill practice. At the time of his Supreme Court appointment, a high school classmate observed: “This kid was a conservative when he was 17 years old. … He was brilliant, way above everybody else.”

However, he was rejected by Princeton University. “I was an Italian kid from Queens, not quite the Princeton type,” he said years later. Instead, he enrolled in Jesuit-run Georgetown University in Washington and graduated at the top of his class in 1957. He went on to Harvard Law School and graduated in 1960. In Cambridge, he met and married Maureen McCarthy, a Radcliffe student.

Scalia began his career as a lawyer with the Jones, Day firm in Cleveland, but he switched directions and became a law professor at the University of Virginia in 1967. He joined the Nixon administration in 1971 as a mid-level lawyer, and he became head of the Justice Department’s Office of Legal Counsel in August 1974 just as Richard Nixon resigned and Gerald Ford became president. In those jobs Scalia won a reputation as being smart, combative and conservative. He also made influential friends, including Dick Cheney and Donald Rumsfeld.

He left the government and returned to teaching law at the University of Chicago when Democrat Jimmy Carter became president in 1977. But after Ronald Reagan’s election, Scalia’s stock soared. He was named to the U.S. Court of Appeals in Washington. And in 1986, when Rehnquist was named to succeed Warren Burger as chief justice, Reagan chose Scalia to take Rehnquist’s seat.

Despite his conservative credentials, Scalia had an easy time at his Senate hearing. He coolly puffed on a pipe and joked with the senators. When Sen. Howard Metzenbaum, a fiery liberal Democrat from Ohio, noted that the nominee had beaten him on the tennis court, Scalia replied: “It was a case of my integrity overcoming my judgment, senator.” He drew a laugh and went on to win a unanimous confirmation. Years later, Scalia often marveled at his smooth ride in the Senate, and both he and his critics wondered whether he

During much of his tenure, Scalia’s influence within the court was limited to writing powerful dissents. His direct manner and combative style alienated some of his colleagues. He mocked opinions written by O’Connor and Kennedy, describing one of O’Connor’s abortion decisions as “absurd” and “not to be taken seriously.” He called one of Kennedy’s a “tutti-frutti opinion.”

They in turn were often reluctant to go along with Scalia in pushing the law to the right.

However, the conservative justices often came together in major cases, none better known than the 5-4 ruling that ended the recount of paper ballots in Florida and ensured a presidential victory for George W. Bush in 2000. Most lawyers had expected the Supreme Court court to stay out of the post-election battle in Florida because the vote counting is governed by state law and because federal law says the House of Representatives will decide a disputed presidential election.

But acting on an emergency appeal from the Republicans, five justices, including Scalia, ordered a halt to the county-by-county recount in Florida on the grounds it could do “irreparable harm” to then-Gov. Bush. “The counting of votes that are of questionable legality does in my view threaten irreparable harm to petitioner Bush … by casting a cloud upon what he claims to be the legitimacy of his election,” Scalia wrote in the Saturday order.

For years afterward, Scalia bristled when questioned about the Bush v. Gore decision. “Get over it,” he replied.