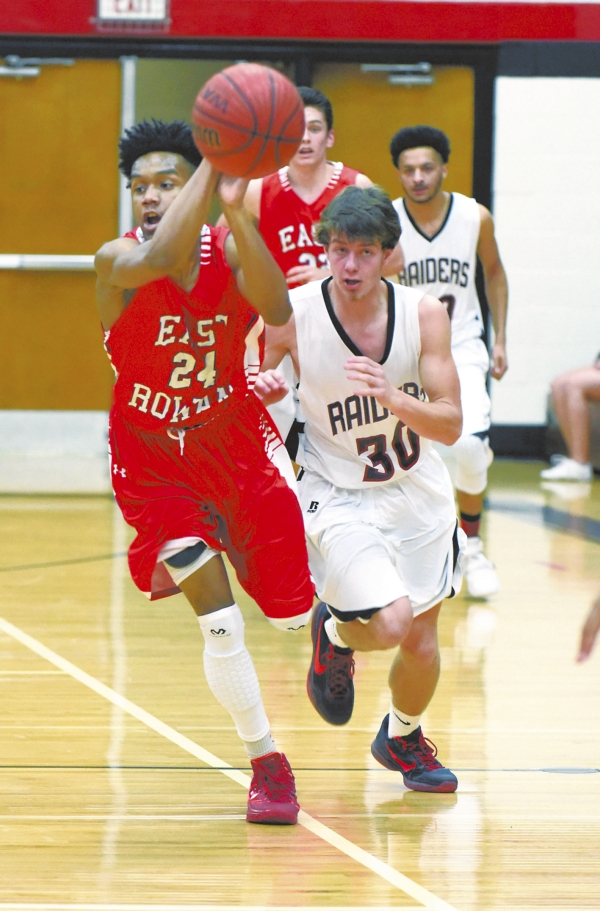 Wayne Hinshaw/for the Salisbury Post ... In a photo from the two teams’ first meeting on Jan. 8, East Rowan’s Brevin Goodlett (24) passes the ball ahead as South’s Hunter Butler (30) looks on.

GRANITE QUARRY — Luck wasn’t on the side of South Rowan’s boys, and now they’re part of history.
Colson Childers’ left-corner 3-pointer that would have tied Thursday night’s game with 28 seconds left took a lap around the rim before rattling off into the hands of East Rowan’s leaping Austin Love.
South lost at East, 60-57, last night in a heated South Piedmont Conference game. The unfortunate bottom line was an 0-24 overall season — the first winless boys basketball campaign by a Rowan County school since consolidation — and an 0-18 mark and a 10th-place finish in the stacked SPC.
Coach Andre McCain and the Raiders did everything possible to avoid 0-24 and to spoil East’s senior night, but the Mustangs, who also were playing their final game of the season, proved resilient. East (6-18, 4-14) got 21 ferocious points from Love, a senior, and 12 courageous points from wounded senior Bravon Goodlett, who was playing on one ankle.
“Last game for the seniors on both teams and you knew everyone was going to fight their hardest,” Love said. “South played a great game. Props to them and props to Colson Childers. We were in a zone, and he was stroking it. He was killing us.”
Childers, a senior, scored a career-best 25, saving his best for last. He made seven 3-pointers and personally shot South into a 12-point point lead in the second quarter.
Tre Littlejohn, another senior, also played a terrific game for South. He scored 15 points. South senior Heath Barringer may have had the biggest rebounding game of his career.
Love led a charge that pulled East back to within 29-26 at halftime.
East caught the Raiders on a Love free throw late in the third quarter, and the Mustangs, playing in front of a huge crowd, pushed ahead, 42-39, when Ellis Taylor buried a 3-pointer from deep in the right corner.
When Lucas Morton drove for an East bucket with six minutes left, the Mustangs led by seven points at 48-41, but the Raiders had one more charge left in them. Ian Bradshaw, who scored seven of his nine points in the fourth quarter, led that charge.
With South trailing, 51-48, with 2:45 left, Littlejohn drove and dished to Childers in the left corner. His seventh 3-pointer tied the game.
After both teams missed point-blank chances, Bravon Goodlett made the clutch jumper from the right baseline that put East ahead to stay.
“I’d re-injured my ankle, rolled it pretty bad and was out of the game a while,” Goodlett said. “But I was able to come back in. I didn’t think that shot was going in. I was just hoping. Somehow it went in.”
Love had big boards down the stretch and most of the Mustangs buried free throws.
East won the game at the foul line where it outscored South, 30-7.
“We kept attacking, fighting to get to the rim,” Love said.
As painful as the loss was for South, it was a positive close to the season for coach Kurt Misenheimer and the Mustangs.
“South played a heck of a game, and I thought we played very well,” Misenheimer said. “We rebounded, we got loose balls, and Love had a huge game for us. We end on a winning note and six of our varsity guys will be back.”