Bids for Rockwell EMS station come in over budget 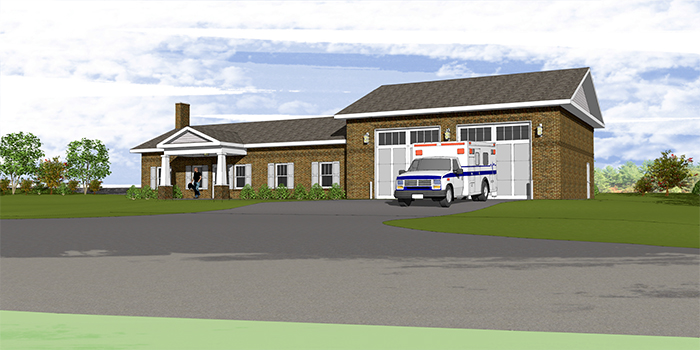 Rowan County officials are planning to build an EMS Station an EMS station on the corner of East Main Street and North Trexler Avenue in Rockwell. On Thursday, they received bids for construction.

The EMS station would sit at the intersection of North Trexler and East Main streets, and be staffed by two paramedics at all times. County officials set aside $500,000 for the project. When companies on Thursday submitted bids for the project, however, the lowest price was $768,000 from Salisbury-based Vertex Construction Company.

As part of the bidding process, county officials included project alternates to reduce the total cost. They could request two of the four bedrooms be removed or delete a non-functioning chimney from building plans. The cost however would remain $200,000 more than initial estimates.

“The project is still justifiable with the cost because of the public need,” Cooper said after Thursday’s bid opening. “You should have one ambulance for every 1,000 calls. The area of Rockwell proper and its surroundings already meet that threshold.”

If built, the EMS station’s service area would include the Town of Rockwell and areas covered by the Rockwell Rural Fire Department, according to Cooper. Currently, stations in the Liberty and south Salisbury communities cover Rockwell, Cooper said.

Adding an EMS station would reduce response times in the immediate coverage area and reduce the number of instances where an ambulance responds to Rockwell from a distant station, he said.

From the outside, Rockwell’s EMS station would look like an average house with two, oversized garages. Inside the 2,700-square-foot building would be four bedrooms, two bathrooms, an office, day room and kitchen. The building is intended as a place for paramedics to work and sleep instead of treating people with an injury or illness, Cooper said.

He said the exterior was designed to match with surrounding buildings.

Funding, however, remains a notable question. County Manager Aaron Church said Rowan would “definitely” have enough money to pay for the project without needing a loan. County leaders would have to decide where to transfer money from, according to Church. He said a sales tax fund that’s been designated for the project may contain more money that the $500,000 previously earmarked.

Cooper and Church both said they were unsure how the EMS station’s cost ballooned past expectations. Church questioned whether cost overages come from site preparation expenses.

“We’re going to have to look closer and see if there’s something we missed,” he said.

Just after Vertex, the next lowest bids came from Charlotte-based EVS Construction and Development at $775,000 and Concord-based Cresent Construction Company Inc. at $789,850. The highest bid came from Salisbury-based KMD Construction at $959,500.