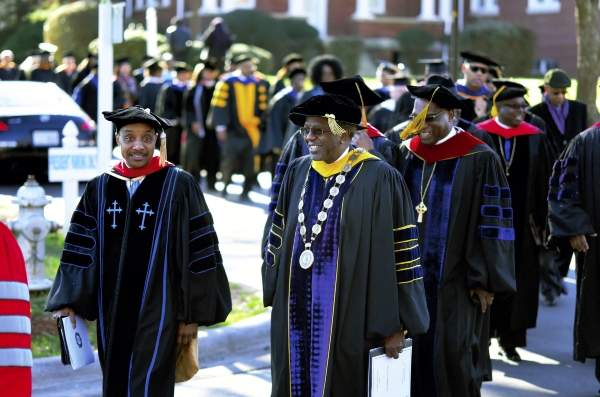 SALISBURY — A crowd gathers in front of the tomb of Dr. Joseph Charles Price, founder and first President of Livingstone College. Those who have come to pay their respects this Founder’s Day are bundled in coats, huddled against the wind. As a wreath of blue and white flowers is laid in front of the small brick building, Dr. Jimmy R. Jenkins, Sr., president of Livingstone, gave thanks for the legacy Price left the school.

Thursday’s event marks the 137th year Livingstone has honored Price’s birthday with a Founder’s Day celebration. This year’s theme, “Continuing the Pricean Legacy,” was filled with messages of hope and endurance and praise of the school’s accomplishments.

Bishop George E. Battle, Jr., senior bishop of Africa Methodist Episcopal Zion Church, praised Livingstone for its ability to “walk with the big boys” while maintaining compassion and not losing its common touch.

It’s a lifestyle that students at Livingstone are taking to heart. During her greetings, SGA President Raven Weathers reminded her fellow students that by letting their own light shine, they are giving permission for others to do the same.

The keynote speaker, the Reverend Dr. Nilous M. Avery, II, Jenkins introduced as “a man whose work has spoken for itself” and “a dynamic leader in this community.” Avery has served as the Pastor of Mount Zion Missionary Baptist Church since 1992 and also serves as the President of the General Baptist State Convention of North Carolina, Inc.

Avery, originally of Asheville, worked as a teacher in Asheville City Schools, and was named the district’s Teacher of the Year in 1989. While in Salisbury, Avery has served on the boards of the Rowan-Salisbury Habitat for Humanity, Communities and Schools, Rowan Helping Ministries, the Rowan Arts Council and the Rowan County Department of Social Services.

Avery praised Livingstone’s history and the work begun by Price that is still carried out by faculty, staff and students.

“There is a cycle of excellence,” he said. “A cycle of supporting one another.”

Avery said that when a student leaves Livingstone, they know that they can handle anything life throws at them.

He spoke of having “tough faith for tough times,” reminding the students of the importance of holding onto hope and faith — no matter how small it may seem. After all, he said, quoting from Matthew 17, a faith as small as a mustard seed can move mountains.

“Tough times bring out the best in all of us,” he said.

Amid cheers and shouts, Avery reminded attendees that God is the author of possibility, and faith can change your outlook and provide new opportunities.

“A problem is only a problem as long as there is no solution,” he said, “and you are at a great institution that provides solutions to everyday problems.”

After his address, Avery was presented with the President’s Award for his work in the community and the state, which Jenkins explained was one of the highest honors Livingstone could give. And the Livingstone Board of Bishops announced that the school’s new fieldhouse would be named after President Dr. Jimmy R. Jenkins. They also announced that a planned STEM wing addition to the Duncan Science building will be named after Livingstone’s sixth President, Dr. F. George Shipman.

Above all, speakers said, Founder’s Day as a chance to refocus Livingstone on the vision and the challenge left by Price as they echoed his words of unshakeable hope and faith in the future:

“I do not care how dark the night; I believe in the coming of the morning.”