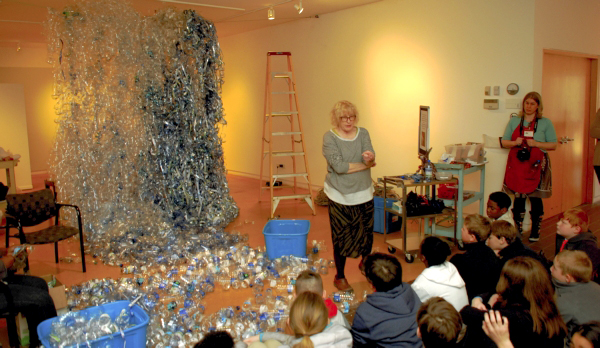 Mark Wineka/Salisbury Post Environmental artist Bryant Holsenbeck of Durham explains to Overton fifth-graders the messages they'll be writing for some of the 6,000 water bottles to make up the waterfall and riverbed behind her.

“If we have a sun,” he said Wednesday, “why are we burning our natural resources for energy?”

Hippert placed that written note — the printed part facing out — in a plastic bottle forming some of the riverbed below environmental artist Bryant Holsenbeck’s waterfall in the Waterworks Visual Arts Center.

All this week Holsenbeck has been building, sometimes with the help of Overton students, a waterfall made up of some 6,000 plastic water bottles collected since last summer.

The message behind her installation, “Message in a Bottle: Rain, River, Ocean,” also is straightforward. We’re a wasteful culture, and too many things in our society are used once and thrown away.

Holsenbeck’s art shows how to take everyday items that are discarded and transform them into something surprising.

There’s a lot of irony, and maybe shamefulness, built into the fact that we deliver water to ourselves in plastic bottles, then throw those bottles away (if they aren’t recycled). But how transformative is it that you can take those same plastic bottles and make a waterfall?

Holsenbeck, of Durham, has made a number of plastic bottle waterfalls. Her largest, “Purified” A River in the Desert,” was an exhibit in the Ellen Noel Art Museum in Odessa, Texas, and contained more than 10,000 bottles.

She also installed, with the help of Theatre Art Galleries and High Point University students, a three-story waterfall in the High Point Public Library and a waterfall that was part of a Piedmont Craftsmen pop-art series in Winston-Salem.

The Salisbury waterfall fits in nicely with Waterworks’ other current exhibits, which are part of “Up Close and Far Away: Through an Environmental Lens,” a program available in the galleries until May 21.

To make Holsenbeck’s waterfall, many of the plastic bottles are cut into spiraled strips, which eventually are tied together in groups and hung off a ceiling cable strung across the YPG Gallery.

Anne Scott Clement, curator and executive director of the WaterWorks Visual Arts Center, said the waterfall probably weighs between 500 and 600 pounds, and she considered that a conservative estimate.

The riverbed below the waterfall includes the bottles in which three Overton Elementary fifth-grade classes included their environmental messages. Those bottles have a cap on them, so theoretically they could float to a destination downstream and be read by someone else.

The river flowing away from the waterfall will extend into the Stanback Gallery Hall. Borders for the shoreline will include ropes discarded by Maine lobstermen.

“I said we should recycle more,” fifth-grader Wisdom Daugherty said of the note she placed in a bottle.

Gracie Sipe said her message was that we have to stop pollution or someday it’s going to destroy our ozone.

Reed Brixsey said his note had words to the effect that “We’ve got to stop using so much water and energy because it takes natural resources to have energy.”

Holsenbeck told the students their notes will help remind adults who see the exhibit to pay attention to environmental issues.

The kids also were able to cut bottles into spirals that became part of the waterfall. In addition, Holsenbeck enlisted their help in stomping some of the plastic bottles flat and in taking off many of the labels.

“Once they start stomping the bottles, it’s all over,” Holsenbeck said, laughing.

Local residents and especially Salisbury-based Cheerwine, which bottles Blue Mist water, have been the source for the bottles.

“It has really been a community effort,” said Ingrid Erickson, education coordinator for Waterworks.

Visits to Waterworks are part of the core curriculum for all fifth-graders in Rowan-Salisbury Schools. Their field trips include 45 minutes of a studio activity and 45 minutes touring the museum.

Waterworks will offer a reception and a chance to meet the artists — Holsenbeck, Lee and Rich — Friday night. Informal gallery talks with the artists will start at 5 p.m. The reception will be held from 6-8 p.m.

Rich’s “The Watershed Project” examines the complicated effects and consequences of large-scale modernization in the Tennessee River Watershed. Rich’s work is in the Norvell Gallery

Jim Lee has a collection of photographed still lifes in the Osborne and Woodson galleries.

“Part of me always will be that little boy from many years ago, inquisitive, mischievous, defiant, empathetic, introspective, shy, capable of intense focus but prone to indiscipline most of the time and not quite knowing where i belong,” Lee says in his at artist’s statement.

“My artwork reflects all of that. Art, science, technology and nature are all of a piece to me.”

‘We’re the lucky ones’: Chinese New Year brings together…