Ash Wednesday begins season of sacrifice for the faithful 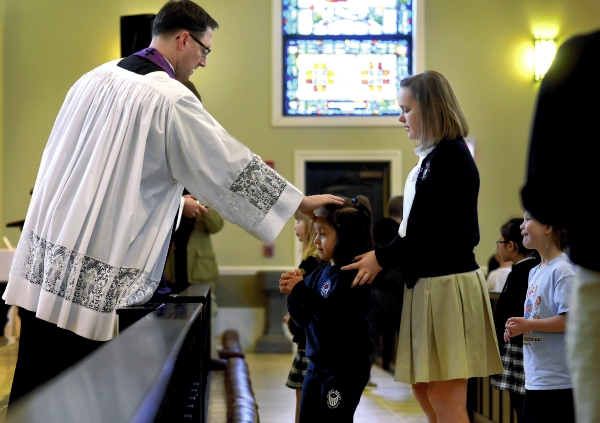 The Rev. Lucas Rossi applies the ashes to Sacred Heart pre-kindergartener Kamila Velazquez’ forehead as seventh-grader Caroline Clark assists. The Lenten season on the Christian calendar begins with Ash Wendesday. Members of Sacred Heart Catholic Church gathered for an Ash Wednesday Mass at the church on Wednesday. Students in the church’s school attended the morning service for the impostition of ashes. Jon C. Lakey/Salisbury Post

SALISBURY — It’s 8:30 a.m. on Ash Wednesday, and the pews at Sacred Heart Catholic Church are packed with people.

At the altar, the Rev. Lucas Rossi blesses a bowl of ashes, made from fronds from last year’s Palm Sunday, and invites parishioners forward. Students from Sacred Hearth Catholic School stream forward first, quiet and solemn. Rossi dips his fingers into the ash and draws a smudged cross on the forehead of each one.

“Remember that you are dust, and to dust you shall return,” Rossi says.

Matt Frank, a seventh-grader at Sacred Heart, says Ash Wednesday is “kick-off” for Lent, as it marks the beginning of a 40-day fast leading up to Easter Sunday.

When she was younger, Theresa Holland, a seventh-grader at Sacred Heart says she and her friends used to laugh during Ash Wednesday because they thought the cross looked “goofy.”

Other young kids attending Wednesday’s morning mass seemed to think so too, reaching up to rub the ash off their foreheads on the way back to their seats. By the end of mass, many students in early elementary school at Sacred Heart had nothing left but a sooty smudge.

But now, Holland says she has a better understanding of what Ash Wednesday, and the ash drawn across her forehead, means

It’s a concept that younger students are learning, as well. Maggie Antosek, a third-grader, says that Ash Wednesday and the following season of Lent helps her, and other parishioners, grow closer to Jesus.

“It’s a sacrifice,” classmate Patrick Beal said, “like what Jesus did for the 40 days.”

Parishioners are encouraged to give up, or fast, something. It can be food, an object, an activity – a Lent fast is only limited by imagination.

Antosek will be giving up chocolate milk, her favorite drink, and her mini iPad. Beal says he’ll be giving up electronics as well, and trying his hand at being vegetarian.

In Sacred Heart’s middle school wing, JP Vaeth says he’s giving up soda and candy. Holland said she was giving up using kneelers during mass, sweets and the cookies the school provides with lunches. But not all fasts are simple.

“A lot of people give up crazy things for Lent,” Vaeth says.

Holland and Vaeth both agree that giving up meat for Lent, like Beal, is a stricter fast. And this year isn’t Holland’s most daring Lent – last year she gave up her bed, and slept on the floor for 40 days. It wasn’t bad.

Her only problem was that she kept rolling under her bed while asleep.

But it’s not all fasting. Parishioners are allowed to break their fast on Sundays, Frank says, for a special reason

“Every Sunday is kind of like Easter,” he said.

And in n addition to fasting, many people choose to add a little something extra into their routine. Holland says she’ll be attending 7 a.m. mass, and adding a workout routine of her own devising that incorporates the Hail Mary. Antosek says she’ll be saying a decade of the Rosary every day.

But despite the challenging Lent season ahead of her, Antosek says she’s enjoying the day.