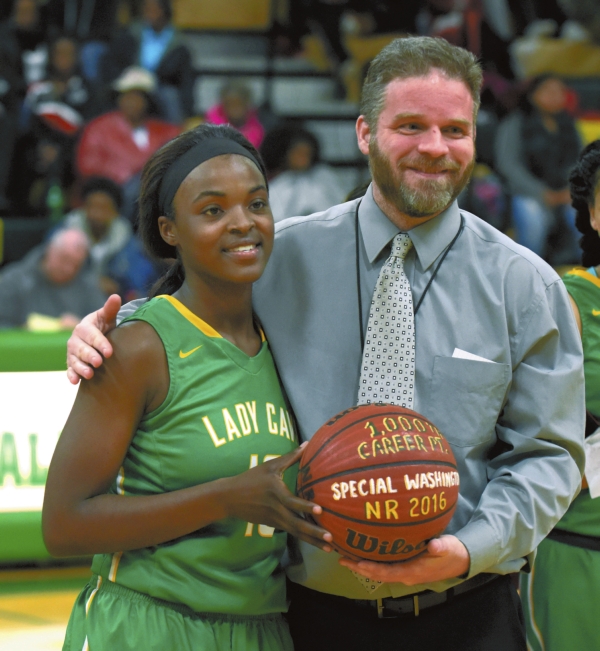 Wayne Hinshaw/for the Salisbury Post ... Special Washington of North Rowan is presented a basketball by Coach Brian Lytton, celebrating her 1,000th-career point last night. presenting a game ball to her for her 1,000 points.

SPENCER — North Rowan’s Special Washington needed more than two hands to hold all the awards and presents she earned on Tuesday.
It was – no pun intended — a special evening for the senior guard.
Her 1,000th career point coincided with North’s senior night celebration.
Washington scored 20 points as the second-place Cavaliers beat Thomasville, 69-50, for another CCC win. She has 1,012 points in her career. Washington is just the ninth North girl to score 1,000, and the Cavaliers have been competing in hoops since the 1958-59 season.
“It’s nice and exciting to score 1,000 points,” Washington said. “To do it in a win and to do it on senior night makes it the best feeling.”
Washington’s 1000th point came as a result of an unselfish play in what has been an unselfish season for coach Brian Lytton’s crew. Aliyah Farmer, another senior star, made the pass and Washington scooped in a banker from the left side to reach the milestone.
Farmer has scored 352 points during an outstanding senior season. She had 24 against the Bulldogs, all on short and medium-range field goals.
North started a special senior night lineup and got an early boost from two buckets by Jordan Morrison. The Cavaliers (15-6, 7-2) led 17-8 after a quarter.
“You never know how senior night will go,” Lytton said. “But our seniors got us off to a good start.”
Led by guard Dee Long, Thomasville (5-14, 3-6) cut into North’s lead in the second quarter. Long made a 3-pointer and had eight of her 18 points in the period.
“She’s improved as much in a year as anyone I’ve seen,” Lytton said. “Last year, we just forced her to go left and we contained her. Now she can go right or left and she’s hard to stop.”
Even with Washington and Farmer teaming for 14 points in the second quarter, North led by only 35-29 at halftime.
But North broke the game open in the third quarter with pressure defense and transition offense.
“We picked up the intensity a lot,” Farmer said. “But the biggest thing is we stopped making silly fouls. We fouled too much in the first half.”
Brianna White’s rebounding and Tre Allen’s defense helped sparked the run.
Farmer, who has great hands and leaping ability, scored three straight buckets during a 19-2 burst, cashing in a stick-back and then getting layups off nice feeds from Allen and Aundrea Godfrey.
When Washington knocked down a 3-pointer to cap the decisive run, North led by 23 at 54-31 with three minutes left in the third quarter.
“I think we were just too excited in the first half because of senior night,” Washington said. “In the third quarter, we played the way we can play.”
Still, Thomasville never quit. The Bulldogs cut the lead back to 13 by the end of the third quarter.
North rebuilt its lead in the fourth quarter, with Washington providing two straight nice passes to Farmer for layups.
“I thought we played a very good game,” Lytton said. “Thomasville is not bad, and they made some good runs at us. We ran our press really well in the third quarter and got a lot of layups, but Thomasville still fought us right down to the end.”