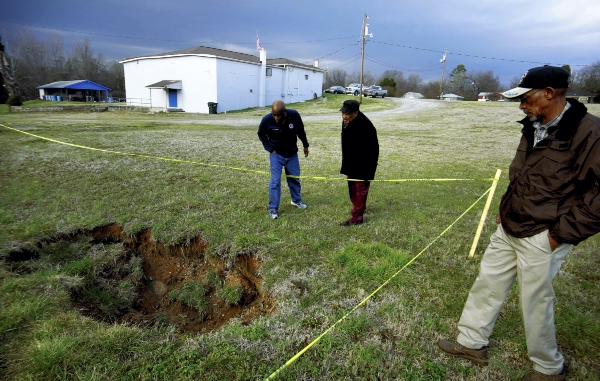 Salisbury City Councilman Kenny Hardin, DeCarlo Duling and Wayne Hill take a closer look at area where the soil collapsed over a sewer line behind the J.C. Price American Legion Post. Hill, right, who takes care of property mowing and upkeep, put a yellow caution tape up around the hole to warn others. Members of the post have some concerns about the stormwater drainage that crosses the back edge of their property in Salisbury. Jon C. Lakey/Salisbury Post

Drainage and piping issues are causing problems at the J.C. Price American Legion Post 107, and the members of the Legion think it should be the city of Salisbury’s responsibility to fix it.

The storm water drain system issues are causing flooding on the property and there are also three sinkholes, one of which is about 5 feet deep and 10 feet long.

The legionnaires contacted Salisbury City Councilman Kenny Hardin for help with their problem.

At the meeting, Bailey said he wanted to be sure that it was the city that laid down the pipes.

Bailey said the piping issues may be outside of the public right-of-way, so the responsibility of repairing any problems would fall on the property owner.

If the storm water system is found to be outside of the public right-of-way, Bailey said the city may be able to provide a matching grant to fix the problem. The Legion Post would be responsible for raising a certain amount of funds and the city would then match the amount.

If the pipes are part of the public right-of-way, then it would be the city’s responsibility to fix it, Bailey said.

Hardin and the legionnaires hired DeCarlo Duling, a paralegal, to find out who laid the pipes. Duling performed a 30-year title search to find out who had a right-of-easement for laying down pipes on the property, which turned out to be the city.

Duling said the pressure of the water trying to get through the clogged storm water drain caused vibration that then caused the erosion of the infrastructure and water leakage.

Hardin and the legionnaires said the problems come from further upstream towards Livingstone College and Horah Street.

“It’s not like somebody’s trying to absolve themselves of responsibility. That’s not the point,” Hardin said. “The point is if we didn’t create the situation, then we shouldn’t be responsible for the resolution.”

During the meeting, the legionnaires also asked the city to keep them informed and involved with their plans. On Monday, there were flags and white paint markings on the property. The legionnaires were not informed that the city would be doing that.

“I just want to make sure the process is followed and respect is given,” Hardin said.

This is not the first instance of piping problems Post 107 has had. According to a document written by Commander Carroll, around 2010 the part of the pipe on the left side of the property was filled with debris, such as tires and washing machines, that people threw into the pipe’s ditch. The city cleaned it up, but did not fix the pipe, according to Comrade Daniel Haddock, membership chairman. The pipe is exposed on that part of the property and “is not working adequately,” Carroll wrote.

Haddock also said at one point, there was water gushing up from the pipe further down on the property, which was also fixed.

The legionnaires have put yellow caution tape around the sinkholes and put a wooden plank over one of them as a safety precaution.

Hardin also said there may be an environmental issue involved because while he was out on the property a couple days ago, he could smell sewage.

Carroll said the safety issues might impact the Legion Post’s annual Memorial Week Celebration event that is held on the Post’s property. The Post has been sponsoring and coordinating the celebration for the last 50 years. It includes things like amusement rides, concession stands and Gospel singing. Churches, fraternal organizations and community members often participate in the event.

“We couldn’t have it with all of this, and that’s the only major fundraiser we have,” Carroll said.

Hardin said he attended the event as a child and brought his own children to the event. He said when it comes to the piping issues, he has “a stake in this.”

Before the meeting with the legionnaires, Bailey, the city manager, said he asked Hardin “which hat he was wearing” in regards to the issue and Hardin said he was acting as a community advocate.

Hardin said he will continue to fight for under-valued and underrepresented members of the community no matter his title.

He also said he believes the situation is the city’s way of pushing the legionnaires off of the land to make room for the new Brenner Crossing Apartments.

The mixed-income apartments were built to replace the Civic Park Apartments.

Hardin said although he was not opposed to the legionnaires moving to another property, he just wanted the city go do it in the right way.

“You just have to show respect and consideration. You just can’t come in and try to force people’s hands,” he said.

The J.C. Price American Legion Post 107 was organized in 1922 and named after the first president of Livingstone College. It sits on about 5 acres of land. They have 150 members and have won 31 plaques for their work.

Some of the Post’s programs include Easter egg hunts, crime prevention and Boy Scouts. Funds from Memorial Week Celebrations are donated to community organizations and projects such as Rowan Helping Ministries, the United Negro Fund and the Christmas Happiness Fund.

“The city can find money when they need to find money, so let’s take care of these veterans because they do such a good service for the community,” Hardin said.

Bailey said the city was planning to do some digging on the property on Friday to find out what exactly the problem is, but they had to push it to Monday because of an issue elsewhere.