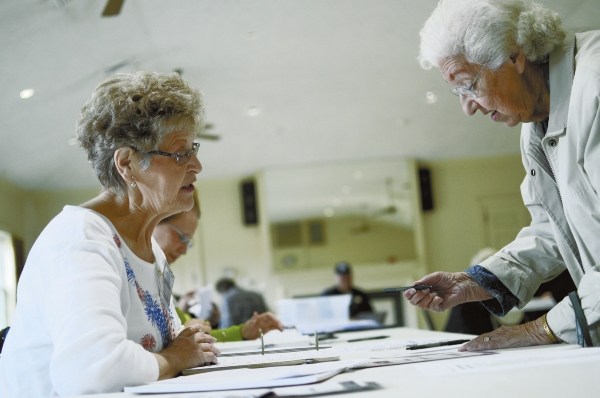 In this 2014 file photo, a poll worker helps a voter at the China Grove Community Building. The Rowan County Board of Elections needs more poll workers for seven precincts for the March primary elections. File photo by Josh Bergeron/Salisbury Post

With about a month until North Carolina’s March 15 primary election, the Rowan County Board of Elections is running short on poll workers.

The local board of elections needs help in seven total precincts — five in Salisbury and two in the Kannapolis area. Rowan Elections Director Nancy Evans said she could use as many poll workers as possible.

“If we don’t need them for March, we could definitely use them in November, during the general election,” Evans said. “We really are just looking for anyone that thinks they can help us out.”

Evans said a poll worker must be from the precinct location where he or she is working. Emergency poll workers can be placed in any precinct.

The types of poll workers include: a chief judge, a judge and an assistant. A chief judge is required to pick up elections supplies, overseeing voting at a precinct and returning results at the conclusion of the election. A judge is responsible for processing voters when they arrive, giving out ballots, helping with curbside voters and checking for photo identification. An assistant is responsible for some of the same duties as a judge and other tasks assigned by the chief judge, Evans said.

Evans stressed that poll workers must remain at the voting location for the entire length of the day — from 6 a.m. until polls close. She said poll workers may need to have a friend or relative bring lunch.

Evans said the only requirement for poll workers is the ability to operate a computer. Party affiliation isn’t a major factor, she said. The Rowan County Board of Elections tries to divide those with party affiliations evenly among precincts.

To sign up as a poll worker, visit the Rowan County Board of Elections website at www.rowancountync.gov/GOVERNMENT/Departments/BoardofElections. Then, click on the link that reads “precinct official recruiting.” At the bottom of the page is a link to the necessary form.