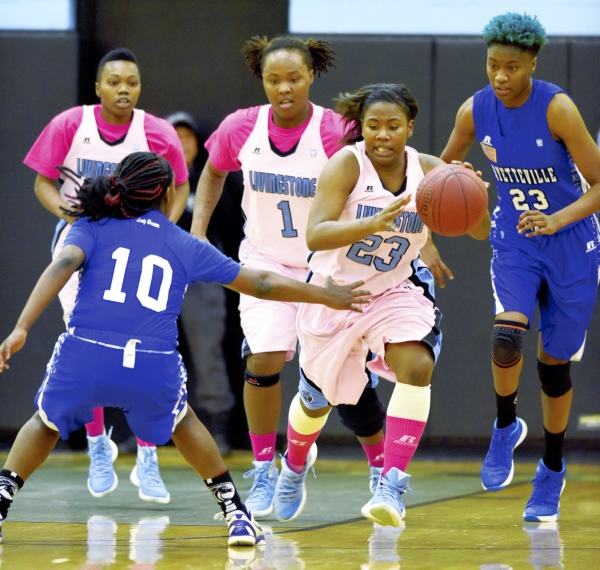 SALISBURY — It’s officially the get-down-to-business portion of the CIAA schedule — and Livingstone’s women confronted it head on Wednesday night.

The Lady Blue Bears moved into a tie for second place in the congested Southern Division standings with an 82-68 victory over visiting Fayetteville State.

“This is the home stretch and we can’t relax,” second-year coach Anita Howard said after Livingstone (12-10, 7-6) erased a 12-point deficit and won for the third time in its last four games. “Time is very short. If we can just turn the corner going in to the tournament, I’m happy. Tonight, we showed signs of that and won without our leading scorer.”

Senior Amber Curtis continues to nurse an injured ankle that limited her to less than two minutes of playing time. Without her 16.1 points-per-game, the Blue Bears relied on sophomore Ariana De’Jesus and senior Brittany Taylor, a couple of guards who seized the opportunity to shine.

“I had to be more aggressive for the team,” said Taylor, who contributed 17 points and 10 assists. “That’s been one of my downfalls. Tonight, I knew it was needed.”

De’Jesus — a second-semester roster addition — turned her sixth game into a bit of a showcase. She netted a team-high 18 points, including seven during a pivotal 43-second span in the third quarter. With Livingstone clinging to a 49-48 lead, she launched a 3-pointer from the left side that caught nothing but net. Sixteen seconds later, she made a steal near mid-court and was fouled as she raced toward the basket. Two free throws gave LC a six-point edge with 2:02 on the clock.

Finally, De’Jesus found a seam and penetrated the lane for a crowd-pleasing layup, providing a 56-50 lead with 1:37 remaining in the period.

“I was just listening to the coach,” De’Jesus said afterward. “She knows I have speed and always tells me if I have an advantage, go for it. It seemed like I had it every time and the results were good.”

Fayetteville State (13-11, 7-6) never recovered, but drew within 60-56, when 2012 Salisbury High graduate Doreen Richardson scored on a fast-break layup early in the fourth quarter. Livingstone responded by latching the gate, limiting the Broncos to six free throws and no baskets over a six-minute span. Back-to-back layups by De’Jesus and Wende Foster’s three-point play midway through the final period gave Livingstone a double-digit lead.

“We just got into foul trouble,” said FSU coach Walter Mebane, whose team beat Livingstone, 65-63, last month. “It makes a difference when three of your starters have to come to the bench. That allowed Livingstone to play to its strengths — working the ball inside and shooting from the outside.”

Richardson — a transfer from Gardner-Webb — turned her last waltz around New Trent Gym into a spotlight dance. With about 30 friends and family members looking on, she shot 8-for-17 from the floor, drained a couple of 3-pointers, made all six of her free throws and topped all scorers with 24 points.

“This is my senior year — this is it,” Richardson said. “I wanted to make my team proud. And this is home, so it’s kind of a pride thing. I didn’t want to come out and play like garbage. ”

Richardson hopes to play overseas next year. She’s learned there’s more to basketball than having the skills to score and defend.

“Talent is never enough,” she said. “It takes effort. I don’t care if you’re better than Michael Jordan. Without effort, talent won’t get you there.”