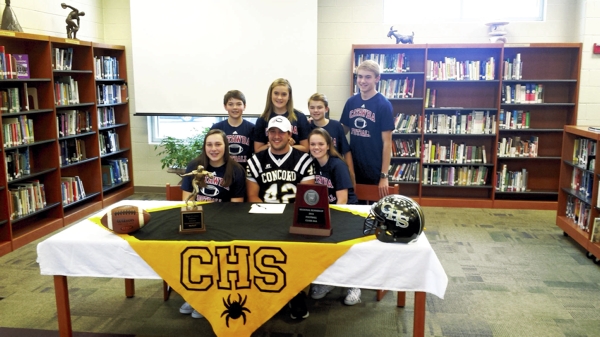 SALISBURY — Catawba head football coach Curtis Walker remembers that the Indians started seven true freshmen in his first season in 2013.
They started five true freshmen in 2014 when they went 6-5 for the second straight year. Catawba started two true freshmen in 2015, a season in which the Indians went 9-3, beat Lenoir-Rhyne and Carson-Newman and made a return to the Division II playoffs and the top of the South Athletic Conference.
The plan is that Catawba won’t have to start any true freshman in 2016. If the Indians do start one, it’s going to be because he’s really special.
“We’ve been able to build some depth to the program and we hope to be able to start red-shirting guys so we can be playing with more fifth-year seniors down the road,” Walker said. “But all the guys we’re bringing in will have an opportunity to show us what they can do. If they’re the best we have, they’ll replace somebody.”
Catawba isn’t going to have a huge 2016 recruiting class because the Indians aren’t losing a lot of people.
Take a look at the cover of Catawba’s 2015 media guide, and there are only a dozen seniors surrounding Walker. Key subtractions will be cornerback Mark McDaniel, defensive lineman Jonathan Jean, running back Cary Littlejohn, center Tim Buck, guard Timmy Pangburn, tackle Lewis McCormick and kicker Chad Hollandsworth.
“We didn’t have a great deal of scholarship money to give out because we have a lot of veterans returning,” Walker said. “But our recruiting filled some needs at positions that were a priority.”
Catawba’s website lists 10 recruits, and Walker confirmed two more that haven’t been listed yet. Local players joining the program include South Rowan kicker Brennan Lambert (5-7, 165), who made field goals of 50 and 51 yards this season, and North Rowan safety Eric Gibson (5-11, 195), who made 63 tackles for the Cavaliers and forced four fumbles.
Concord tight end Drew Yoos (6-3, 230) is another player well-known to local football fans. He had 27 catches as a senior and scored five touchdowns.
Filling the void left by McDaniel at cornerback was a major priority for the Indians. They’ve signed two defensive backs from South Carolina — Trey Murray (6-0, 170) and Chris Webb (5-11, 165).
Catawba also needed a running back to replace Littlejohn. They recruited two. Walker sees Wilkes Central’s Andrew Bynum (6-0, 190) as a power back in the mold of Littlejohn, while Richmond County’s Quientel Goodwin (5-9, 180) could be the successor to Catawba’s speed back David Burgess, a rising senior.
Bynum posted phenomenal numbers for Wilkes Central — 215 carries, 2,388 rushing yards and 33 touchdowns. He rushed for 11 yards per carry.
Goodwin’s numbers for Richmond County in a stout 4A league were equally eye-popping — 267 carries, 2,323 rushing yards, 29 TDs. Goodwin averaged 8.7 yards per carry.
“Goodwin is electrifying,” Walker said.
Another priority for the Indians was linebacker, even though that’s the team’s strongest position. Three of the four starters will be juniors in 2016, including All-American Kyle Kitchens, so Walker wanted to bring in guys to groom as future replacements. He landed two he’s excited about — Fayetteville Jack Britt’s L.J. Melvin (5-11, 200), whom the Indians targeted for more than a year, and athletic Dre Taylor (6-1, 200) from Florida.
Catawba has only signed one offensive lineman so far, but he’s a good one. Mount Pleasant’s Zach Mayo (6-2, 280) could be a future starter.
Catawba has inked two defensive linemen.
Darius Jackson played at South Carolina’s Loris High for former Catawba player and coach Jamie Snider, a longtime friend of Walker’s. Catawba got Jordan Hemingway from the same school a year ago.
Walker is ecstatic about getting defensive lineman Omar Staley (Georgia Military) nearly a week after the official National Signing Day on Feb. 3.
“Sometimes the dust clears after signing day and a very talented guy is still available,” Walker said.
Staley (6-4, 290) was a holy terror sacking QBs two years ago for Dutch Fork High in Irmo, S.C. He has experience on both the offensive and defensive lines, but he runs so well he’s certain to play defense for Catawba. He’ll have two years of eligibility and should make an impact next fall.
“He has great size,” Walker said. “And when we timed him, he was faster than any lineman in our program.”
Walker lauded his staff for its recruiting efforts. Making the playoffs meant the time available to get on the road to recruit was shorter, but that’s a nice problem to have.
The Indians had an easier selling job this time. They weren’t just offering opportunity, they were offering the chance to join a program where guys earned rings.
“We achieved a goal last year,” Walker said. “We went out looking for athletic young men that want to be champions, and we found some good ones. Several of our recruits are guys who came to our summer camp and we’ve built a relationship with them and their families.”
Recruiting continues. Walker said the Indians still want to sign a wide receiver, a defensive lineman and a cornerback.
“We’re still looking,” he said. “But we’re happy with where we are.”