‘We’re the lucky ones’: Chinese New Year brings together families made richer through adoption 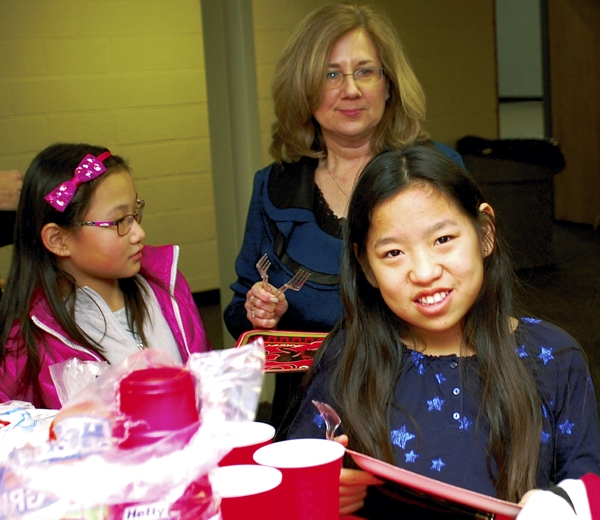 SALISBURY — Monday, when everyone seemed down in the dumps from the Carolina Panthers’ loss in the Super Bowl, a small group of  families found time to celebrate an important holiday — the Chinese New Year.

It meant a lot to the children and parents who gathered Monday night at the First Baptist Church Ministry Center and dined on Chinese food, made paper lanterns and dragons and cherished what makes them special.

The common thread: Years ago, or even months ago, the parents had gone to China, where they adopted sons or daughters and brought them back home.

Lisa Mather remembers that day in 2000 when she and her husband, Kevin, were finishing up the last pages of paperwork in China and they set eyes on their daughter, Mikayla, for the first time.

Mikayla, now a 17-year-old junior at Salisbury High, was only 19 months old and tiny for her age.

“I still, when I think about it, I get goosebumps,” Lisa Mather said. “That was just like the best thing ever. … For me, I loved her before I met her.”

Kevin Mather digs out his wallet and finds the little photograph the couple received of Mikayla long before the day the adoption decree was signed and she was theirs. Through the years, so many people have told them how lucky Mikayla was to have been adopted.

“We’re the lucky ones,” Kevin said.

Melody Roberts served as one of the chief ramrods in getting this group of parents and children together for a second Chinese New Year celebration. She and her husband, Rob, adopted their daughter, Shaelyn, when she was only seven months old. Now she’s 17, too, and a junior at Carson High.

Some years back, Melody and Rob had no intention of adopting again. They were still in their starter home and thought they should finally invest in something bigger.

Melody said she had a nagging feeling she shouldn’t be investing in something like a house. She believed God was telling her it should be something eternal, and Rob was feeling the same thing.

After they looked at a house that was for sale, they looked at each other and knew it wasn’t right. They decided then to adopt another Chinese child — an eternal investment that was more important.

They adopted Aiden, who is now 9.

“He was supposed to be ours,” Melody says, “and I’m sure all the adoptive parents feel like that.”

Melody Roberts decorated the ministry center in reds, yellows and blacks. This year’s Chinese New Year ushered in the Year of the Monkey, so even the paper dinner plates had monkeys on them.

Her table settings included mandarin oranges, the sign of prosperity; cherry blossoms, the sign of new life; and paper lotus flowers, the sign of empowerment. “In Chinese culture,” Lisa Mather noted, “everything has meaning.”

The Forever Family Ministry of First Baptist Church is going to start an Adoption & Foster Parents’ Support Group. The first meeting will be at 5 p.m. March 6 at the Ryan’s restaurant on Jake Alexander Boulevard.

Russ Robbins is the minister of music at First Baptist. He and his wife, Angela, adopted China-born Ethan, now 5, about two-and-a-half years ago. The whole process took three years.

While the expense, all the hoops to jump through and the endless paperwork to fill out can be burdensome, China’s adoption procedure requires a one-time, two-week visit after which U.S. couples can bring their sons or daughters home.

The first week in China is always spent in the child’s home province. The second week the couples and children go to Guangzhou. Families from all over the world who are adopting Chinese children wind up in that city, which is friendly to the foreigners.

God was saying, ‘This is what you’re going to do with your life,” Angela said of the couple’s decision to adopt Ethan. As early as their second date, when they were still in the courting stage of their relationship, Russ and Angela spoke of possibly adopting a Chinese child some day.

Ethan is a bubbly, energetic kid who usually has a smile on his face. His parents think it’s important that he learn about Chinese culture and try to help him understand where he was born.

Once you’ve adopted a Chinese child, many of the parents said Monday, you naturally are drawn to other families with the same experience. “You kind of gravitate toward each other,” Kevin Mather said. “There’s not that social barrier in the way.”

Mikayla Mather and Shaelyn Roberts have been friends since pre-school. Both have been back to China on trips with their parents, and for that reason they’re not exactly wild about the Americanized version of Chinese food.

In China, all the vegetables are fresher, Mikayla said. The girls know nothing about their real parents or siblings, if they had any.

Since she was 3, Mikayla has wanted to be a veterinarian. The Mather menagerie today includes five dogs, four cats and two horses. Mikayla is an equestrian, who has been competing in events for nine years.

Every March, the Mathers celebrate “Gotcha Day” on the anniversary of the day they adopted Mikayla. The finest day of their lives, Lisa Mather said.