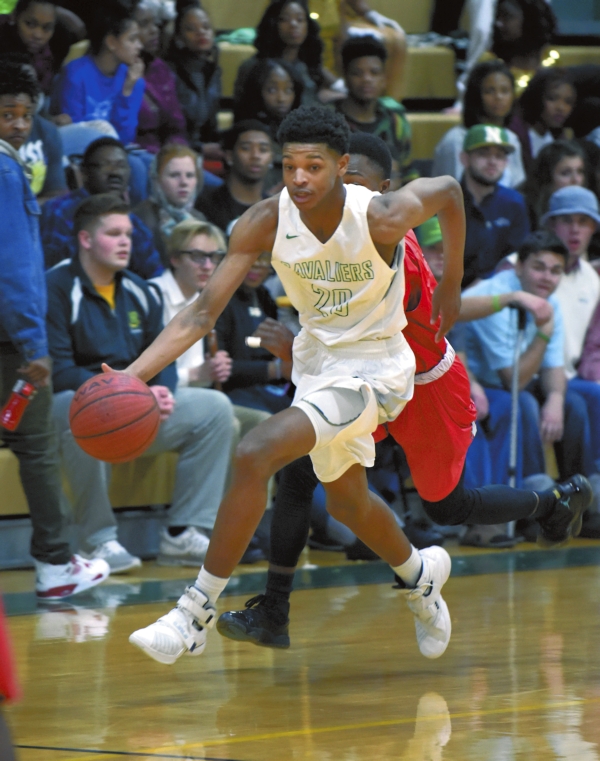 Wayne Hinshaw/for the Salisbury Post ... North’s Josh Handy (20) races up the sideline against Thomasville last night during the Cavaliers’ victory.

SPENCER — It was physical enough between North Rowan and Thomasville that referees should’ve been throwing flags instead of whistling fouls.
Everyone needed a mouthpiece — and shoulder pads.
“Well, yes, it was rough,” battered and bruised North Rowan guard Jalen Sanders said with a smile. “But the game at Thomasville was 10 times rougher.”
Down as many as nine points in the first half, North weathered a serious challenge from the visiting Bulldogs and pulled away to win, 84-66, on senior night.
Sanders, a senior and the No. 2 scorer in school history, poured in 30 points, raining in long jumpers and beating the Bulldogs to the rim on fierce drives.
The victory gave the Cavaliers (19-2, 9-0) an outright 2A Central Carolina Conference championship. They had shared the previous two titles with Lexington.
North was ranked second in the NCPreps.com Poll that was released on Tuesday. In the second half, the Cavaliers looked worthy of that lofty ranking.
“I like where this team is right now,” North coach Andrew Mitchell said. “That doesn’t mean we won’t lose, but we won’t lose because we took someone lightly or because we were unfocused. This team is focused.”
North started an unusual lineup to celebrate senior night, and Thomasville (11-9, 4-5), hustling and attacking the rim, worked its way to a 17-11 lead after a quarter.
Thomasville’s Jahare Taylor-Thomas tossed in a long-distance Hail Mary to end the first quarter and he was a human highlight reel in the second quarter. He scored a dozen in that period. Thomasville’s mojo and momentum peaked with a 25-16 lead, two minutes into the second quarter.
North’s No. 2 and No. 3 offensive options (Joe Scott and Josh Handy) were quiet in the first half, but Sanders kept the Cavaliers afloat with help from Henderson Lentz and Xavier Haley. Lentz scored 15 in the first half.
“I’ve been sick and I just slept all day on Monday, so I could go to school and try to play today,” Lentz said. “But then I came out and the ball felt right leaving my hand.”
A Lentz 3-pointer provided North with a narrow, 39-36 halftime lead.
“We felt like when we came here that we could play with them,” Thomasville coach James Atkinson said. “We had our chances to build a lead, but we’re still struggling doing some of the little things. We’ve got to do those things if we’re going to make that move from being good to being great. We’re taking some baby-steps forward and we took a few more tonight.”
North was great in the third quarter because Handy came to life. North was clinging to a 44-42 lead when he made back-to-back floaters in the lane, and he got fouled on the second one. When Sanders made three free throws and buried a long 3-pointer, North had a sudden 11-0 run and a 55-42 lead.
“We’ve been working a lot on our shooting in practice,” Sanders said. “I got into a rhythm on my outside shots tonight.”
Thomasville’s Josh Scott made two 3-pointers 44 seconds apart to cut North’s lead to 61-53, but the Cavaliers put the ball in Sanders’ hands for the last possession of the third quarter.
Sanders dumped the ball to an open Lentz for a 3-pointer at the horn that pushed the Cavaliers’ lead back to 11. That may have been the game’s single biggest shot. Lentz made it from deep on the left wing.
“They were in a zone, but they were expecting me to shoot and I saw a double-team coming at me with the clock going down,” Sanders said. “Henderson rolled in and then came back out. I got him the ball and he made a great shot.”
Sanders banged another 3-pointer to put up North 69-57 with 5:43 remaining, and Joe Scott took over from there against the tiring Bulldogs. He made four buckets in the stretch run, and North held Thomasville to four field goals in that final quarter.
“Thomasville is good and they were coming off a big win against Salisbury that gave them a lot of momentum,” Mitchell said. “They came at us hard. If Hendo (Lentz) hadn’t had that great first half, we could’ve been in trouble. He’s been sick. I’m glad he found the strength to shoot the ball the way he did.”
Taylor-Thomas scored 22 points for the Bulldogs, while Tyquan Anderson had 17.
“Tough game and a good win for us,” Lentz said. “A whole lot of people contributed.”