Blogger wants to make your life easier and your meals better 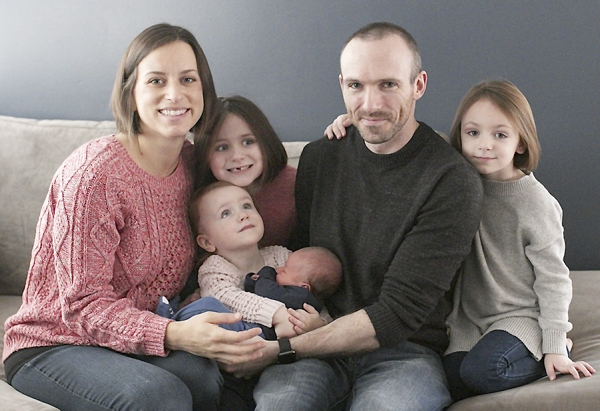 Maybe you want to turn over a new leaf, too. Start getting organized, stop agonizing about what’s for dinner and who will cook it and when it will be ready.

Meet Kelly McNelis, mother of four, Ph.D. in psychology and the star of her own blog, New Leaf Wellness.

New Leaf Wellness has answers for busy people, and better yet, recipes that can go from freezer to slow cooker, things your family will enjoy, including the kids.

McNelis, speaking from her home in Pittsburgh, Pa., said the site started in 2012, and her husband helped create it. “I called in favors with everyone else.

“At first, I was trying to help other moms simplify their lives to be more healthy and happy.”

She started sharing recipes, as well as tips for balancing motherhood and a healthy lifestyle. She thought that would be the biggest part of it, “But the recipes really caught on and took off.

McNelis loves food and always has. She likes healthy recipes and healthy cooking. She has run one marathon and at least 10 half marathons.

She figures what works for her should work for other people.

Then she started experimenting with recipes that don’t have to cook in advance. She focused on meals she could assemble in 15 minutes or less, with 10 ingredients or less and then cook entirely in the slow cooker.

“I like the idea of freezing it before it cooks so I can make a bunch of meals at one time.” She already been freezing raw meatloaf to bake later in the oven.  One of the ones she recently completed is mozzarella stuffed meatballs that she freezes in a pan before baking

The best thing about the slow cooker is “it means coming home at the end of the day to a finished meal. In the middle of the week, people just want to come home for dinner and” not have to do a lot of preparation.

Here newest idea is freezer skillet meals that will cook in 15 minutes or less.

“So if you get sick of the Crockpot,” these are alternatives.”

One of her most popular recipes is slow cooker chicken curry, which she put on the site years ago and is still popular.

Another favorite is a slow cooker beef roast with carrots, Mexican seasoning, olive oil and vinegar.

On the one hand, she approaches it as her job. “No matter what job you have, you have to get things done. I love coming up with new recipes. It’s not that hard to do. I love trying new food.

She and her cousin are working on a new ecookbook inspired by Asian foods. They’re doing a restaurant tour to taste things and come up with new recipes.

Her husband is her No. 1 taste-tester “We eat everything I make. He’s picky, so if he likes it, I figure everyone else will like it.

McNelis has responded to questions about the safety of putting raw meat and vegetables together in the freezer. “The USDA says it’s safe for everything from chicken to vegetables because when you go down to zero degrees, you stop the spread of bacteria, yeasts and microbes.

“I remind people that you’re going to cook it anyway.”

She recommends putting the recipe together, freezing, then thawing it overnight in the refrigerator before putting it in the slow cooker. She knows some people go straight from the freezer to the pot, but she sticks with thawing. “Or you can run it under water in the morning.

She does not use a lot of salt, reasoning that it can be added later in the cooking process, if necessary.

A couple of things she doesn’t use in her meals — fresh broccoli or potatoes. “Broccoli does not freeze well. You’d have to blanch it first, so I use already frozen broccoli.” Some fresh potatoes are OK, but she doesn’t like the end result, so she doesn’t use them much. “I don’t want to have anything I have to cook ahead.”

If it’s a soup recipe that has pasta, she recommends adding the pasta 30 minutes before the end of the cooking time.

Her ebooks have nutritional information that she has calculated herself. She doesn’t do a nutrition breakdown for the free recipes on her blog because its very time-consuming.

A dietitian has reviewed three of her books, and McNeills recently did a gluten-free book that she asked a specialist to look at. “She pointed out hidden sources of gluten.”

Although she develops all the recipes and takes the photos, she still considers the work part-time. “I work every single week on it. I’m dedicated to coming up with new content.” She’s reading a photography book now and working to organize the grocery lists better.

She loves being an entrepreneur and having her own business. Previously, she did research and worked for the government. but now, “nothing is better than this.

Her husband, Andy, is happy about it, too, as are the children, Cameran, 6; Isla, 4; Caiden, 2 and Jude, just 7 weeks old. Her website is www.newleafwellness.biz