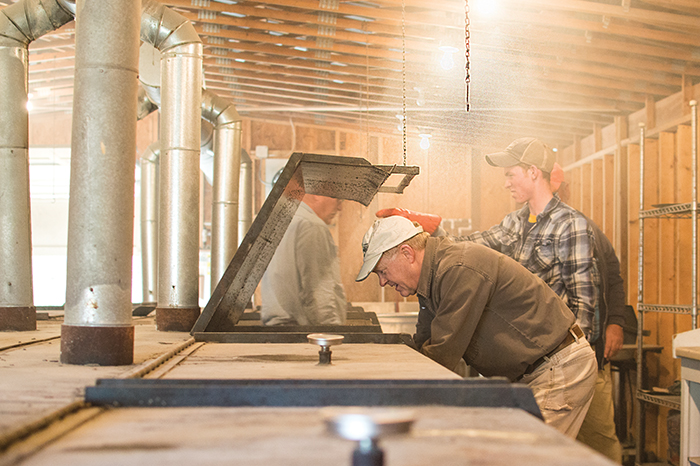 Josh Bergeron / Salisbury Post - Back Creek Presbyterian Church members Ben Knox and Daniel Thrailkill on Friday open up a cooker to flip Boston butts as part of a fundraiser for the church's bi-annual mission trip.

There wasn’t a structure fire or any need for alarm. Instead, a local church was cooking up an impressively large batch of pork for its biannual mission trip to Mexico.

When The Dart last week landed near Sloan Park, members of Back Creek Presbyterian Church were cooking pork butts and shoulders in preparation for a mission trip next year to Merida, Mexico — a city in that country’s Yucatan Peninsula. Every other year, the church travels to the region with a group of its members. In 2015, the church brought 18 people to the Mexican city. With about two years of fundraising, the church covered all travel costs — $1,200 to $1,400 per person.

With pork butts and shoulders combined, last week’s cookout included about 129 total pieces of meat. Church members first burned hickory wood. Then, they used the coals to help cook the massive expanse of meat in a facility owned by the Millbridge Ruritan Club. It required hours of work.

At 3 p.m. the group was still in its initial hours of cooking. Back Creek Presbyterian Church Pastor Bill Thrailkill estimated the pork butts and shoulders would be done by midnight.

Just after 3 p.m., the group began the regular task of flipping every single piece of meat. First came the flip. Then, they shoveled hot coals into a wheelbarrow. Finally, they inserted the coals beneath each cooker. In a couple hours, the group would repeat the same task.

It’s been more than 20 years since the first mission team from Rowan traveled to the Yucatan Peninsula. Thrailkill said mission teams traveling to the region have, among other things, built a church that’s grown to 500 members, a seminary and a school. In recent trips, church members have also expanded their work to a nearby rural town.

Thrailkill and church member Ben Knox said many of the local residents have become close friends, family even, with the missionaries.

During a previous mission trip, Thrailkill said a local family waited until church members arrived to hold a quinceañera — an important celebration that celebrates a girl’s 15th birthday.

“It’s a lot different than here,” Knox said. “There’s not as many trees and it’s extremely hot and muggy.”

Knox said Merida is also much larger than Millbridge — a rural community in western Rowan. Estimates for the Mexican city place the population at nearly 800,000.

Back Creek Presbyterian Church’s next trip to Merida will be in summer 2017. Until then, the church will have a number of other fundraisers — including a “chicken drive through” and breakfast event in March — to help with travel costs.