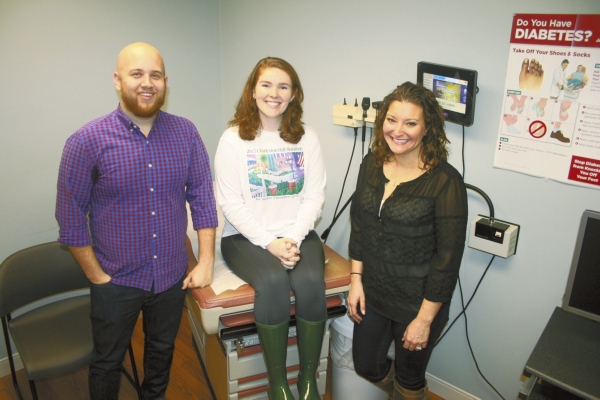 For the past four years, Community Care Clinic has hired gap-year students to serve as medical assistants.

It’s been a win-win situation, providing quality personnel for the clinic, and affording students a wide range of experiences in working with underserved populations. The three medical assistants have worked under Dr. David Smith, the clinic’s medical director.

“It’s worked out very well,” Smith says. “We’re very proud of the fact that these students are advancing their careers. We talk about cases and lab reports, and what is and isn’t important. You’ve got to feel comfortable talking with patients.”

“It’s important for us to be the community’s clinic,” says Krista Woolly, its executive director. “We want to serve not only the patients, but also potential medical professionals who will hopefully return to this area with a better understanding of the plight of all people.”

Four years ago, Jessica Weddington Juhaish, now 29, was waiting to begin a medical residency. Because she had attended medical school in the Caribbean, the ending of that school year did not coincide with the beginning of residencies — always in July — so she had to wait a year.

To keep up her skills, the China Grove native decided to volunteer at the clinic.

For the clinic’s pharmacist at the time, it was an epiphany. Why not hire other gap-year students in similar situations, thought Julianna Parrish.

“It was God’s timing,” Parrish says. “Jessica showed up at the time we had an opening. It worked so well that we decided that’s what we’d attempt going forward. It’s benefitted our patients and the clinic. With students fresh out of school, you get new energy, new ideas and a new perspective — which is perfect for our setting.”

Wesley Eagle, 26, saw an article about Juhaish in the Salisbury Post, and decided he also wanted to volunteer at the clinic. He’d received a degree from UNC in exercise physiology and also had his EMT license, but had not yet found a job. He volunteered through the spring of 2013, and worked full-time from June 2013 to May 2014. He’s now in physician assistant school at Long Island University-Brooklyn.

“Working at the clinic greatly improved my patient interviewing skills,” Eagle says. “I have a better understanding of the healthcare system and Obamacare.”

He adds, “I was better prepared for school than my classmates. With some of my classmates, you could tell they had not interacted with patients.”

Before he left for school, Woolly jokingly told him he couldn’t depart before finding a replacement.

He did just that, in Emily Patterson, 23. She’s also a UNC graduate, with a degree in exercise and sports science. She’ll enter physician assistant school at Wake Forest University later this year.

“Wake favors people who work with underserved populations, so it’s been an advantage,” Patterson says. “One thing the clinic has taught me is that care is multifaceted. There are so many things you have to consider when taking care of someone.”

“I had a middle-class upbringing,” says Eagle, as did Juhaish and Patterson, “and you never think people can’t afford insurance. I’m planning to come back to the area to work.”

Working at the clinic, Juhaish says, “has helped with the transition to my residency. Working and seeing people is totally different from the classroom.”

She is now a third-year OB-GYN resident at MedStar Franklin Square in Baltimore.

Her husband, Brandon, a Kannapolis native, will receive a master’s degree in public policy in May. They are awaiting the birth of their first child, a son, also in May, and they want to return to Rowan County.