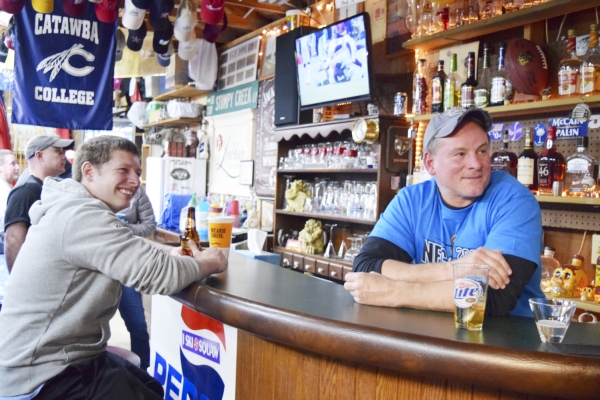 People start trickling out of Doug Loeblein’s place during the halftime show, towing teens and drowsy toddlers towards their cars. When the game started, however, the workshop-turned-mancave was packed wall-to-wall with blue and black. Loeblein said he sent out more than 100 invitations to his Super Bowl party, not including the kids that many brought along. And while their house flooded with people, to the Loebleins, the more the merrier.

For Doug and his family, a Panthers Super Bowl party is something of a tradition.

Doug and wife, Janet, hosted a big party the last time the Panthers went to the Super Bowl, in 2004. At the time, their oldest, Berkley, was about two. A few things have changed in the past 13 years. Berkley is now a freshman at West Rowan and has her driver’s license. And she has two siblings, Noah, a student at West Rowan Middle, and a younger sibling in fourth grade. In that time, Doug’s workshop has transformed into a “man cave” decked with ball caps, Panthers flags, Catawba gear and a full bar.

Sunday night, guests cluster around three screens inside, or sit around a fire pit, watching screen number four. The TVs are a little bigger this time around, Doug said, and there are several new faces.

“The circle has changed quite a bit,” Doug said.

This Super Bowl, the Loebleins are surrounded by neighbors, co-workers from employer Taylor Clay and fellow parents. Many of the people that fill the brightly-lit building Doug and Janet met through their kids. And outside, a gaggle of teens gathers around a fire, shouting at the television whenever a particularly good — or bad — play is made. As the night wears on, the kids move inside, but they’re still the Panthers’ most enthusiastic supporters.

Berkley can remember the 2004 shindig and said she’s been talking her parents into hosting another party since the Panthers went on their winning streak.

When the team made it to the final playoffs, she said, Doug conceded.

In the middle of Loeblein Panthers’ territory there was a single Broncos fan, 11 year-old Dylan Pratt. Pratt was decked out in a Broncos jersey marked with number 18 — Manning’s number. When the Broncos stopped a pass, or made a tackle, Pratt would cheer while everyone booed, shouting down the nearly 30 teens and kids who attended the Sunday night gathering. The West Rowan Middle School student said he looked forward to an orange and navy win.

Noel Adams said that the Loebleins is the “place to go” for a Super Bowl party. She didn’t attend the 2004 gathering, but Sunday night, everyone knew of it. She spent the night coralling her two kids, Blake, 1, and Stewart, 2. Both wore a Kuechly jersey. Adams said when asked who he wanted to be, two year-old Stewart would yell, “Kuechly!”

Her husband, Stewart, said he couldn’t think of anything better than the Panthers being in the Super Bowl, and hoped they’d win. He said that often, the team’s home cities experienced an economic boom after a win.

As the game played out, people piled plates with pizza, wings and other goodies, and toddlers pulled strawberries from the buffet or took swings at a punching bag. Behind the bar, Doug kept the drinks flowing as people watched clustered together inside the house or the garage to watch the game, or gathered in groups to talk, share a joke or make a new friend. During halftime, kids went out into the driveway for a game of basketball.

“There’s no other place to watch the Super Bowl,” Rob Roakes said.

Roakes attended the Loeblein’s last Panthers celebration, and has remained good friends with the family.

But even a sharp cut in numbers after the halftime show didn’t dampen spirits as the third quarter cranked up with more cheers and shouts from the remaining crowd.

Doug said that at the last Super Bowl, he thought the Panthers would win, right until the last moment.

“But this time they’re gunna win,” he said.

And while his predictions of a Panthers shutout were overturned five minutes into the first quarter, Doug still held out hope. As families cleared out towards the end of the third quarter, a group of dedicated fans stayed at the Loeblein’s, clumped around a table, waiting to see which way the game would turn.