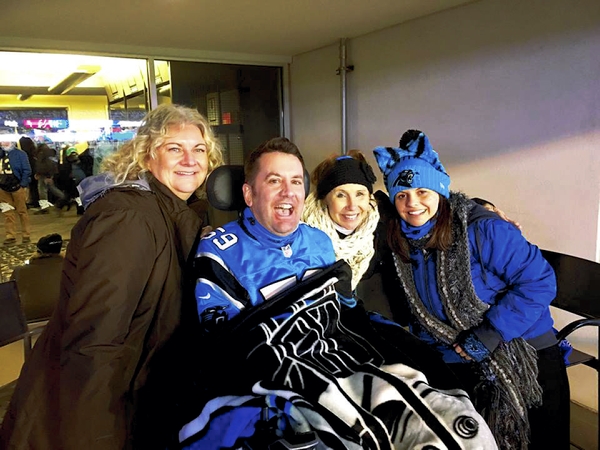 Submitted photo ... Kevin Clay, second from left, and wife Melinda, right, shown with friends at the NFC Championship game in Charlotte on Jan. 24. Clay has been a Panthers season ticket holder for 20 years.

Kevin Clay has two items on his bucket list — Super Bowl 50 and Heaven.

Clay, 54, a former Salisbury resident who now lives in Charlotte, is battling ALS. He is going to scratch the Super Bowl off his list this weekend.

“In the words of Peyton Manning, this might be my last rodeo,” Kevin said by typing the message on his phone. “My bucket list is the Super Bowl and Heaven.”

The ALS progression has severely limited his speech and during a phone interview, Kevin’s wife, Melinda Paganelli Clay, “spoke” for him.

“Kevin has always been a Panthers fan,” said Melinda, herself a Salisbury High School graduate and former resident. “He’s been a PSL owner at the stadium for 20 years — club level 311. He doesn’t miss a home game and it’s very important to him to be at the Super Bowl.”

Kevin’s father died from ALS (amyotrophic lateral sclerosis), also known as Lou Gehrig’s disease, in 2001. According to Kevin, his father, Benjamin, became very bitter and closed out the world around him.

“Kevin wants to share with other people,” said Melinda. “He wants to continue living and have a good time. He wants to show people with cancer and other diseases that you can go on ‘living while you’re living.'”

Says Kevin, again typing a message: “I embraced and accepted my diagnosis from the onset. This is God’s plan for me and our motto together is “We Got This.”

A genetic form of ALS called “chromosome 9 open reading frame 72,” or C9orf72 is what Kevin inherited from his father.

Melinda says that Kevin’s brother has a 50-50 chance of getting the disease as well. “We all carry the defective gene and researchers are trying to find out what causes the defective gene to come out in some people but not others.

“We’re in a study right now with the doctor (Bryan Traynor) in Maryland that discovered the actual gene that Kevin has, a genetic mutation,” continued Melinda. “Kevin’s dad first thought that he had Parkinson’s. He didn’t know it was ALS until he received the correct diagnosis and then he only lived 11 more months.”

Kevin’s father never had the genetic test because it costs $10,000 and some insurances don’t cover it, according to Melinda.

Kevin is from Marietta, Ga., went to high school there and then Pfeiffer University. Through his work and family life, Kevin always remained fit and active.

Melinda and Kevin were living at Wrightsville Beach, near Wilmington, when the symptoms started for Kevin in April 2013 with twitching in his left hand and up the arm. He passed it off as a reaction from a tetanus shot, but then he was running one day and suddenly tripped and fell.

“When Kevin fell, he suspected ALS,” said Melinda. “He told doctors about the genetics in his family and we received he formal diagnosis in July 2014.”

This time last year, Kevin was getting around with a walker. But by last April, Kevin lost even that ability. Melinda said that his muscles were starting to fail and Kevin was relying on his eyesight to walk — but he kept falling.

That’s when Kevin moved to a quantum eye level chair, a $28,000 piece of equipment that “does all kinds of neat things,” according to Melinda.

The Clays had moved to Wrightsville Beach from Salisbury in 2010 and moved to Charlotte in May 2014. They live just a few miles from Carolinas Medical Center.

Kevin worked at the Charlotte campus of Microsoft, as an industry marketing development manager. He is still employed by Microsoft.

“And that has been a true blessing, being able to keep his benefits,” said Melinda. “They have been a great help. They paid for the chair, Kevin’s medication is $1,600 per month and now he has home nursing, too. We just recently got a nursing company in here because it was just getting too much for me.”

In addition to caring for Kevin, Melinda has her hands full with their 15-month-old son, Cameron, and her 10-year-old daughter, Kaeleigh.

Kevin has two grown daughters, Lindsay and Madison, both of whom graduated from West Rowan High School. Their mother is Jill Safrit Clay, of Salisbury.

The day after the NFC Championship (Jan. 25), Melinda began the steps of getting to the Super Bowl.

She contacted the NFL offices in New York and after many steps, talked with the league’s hospitality and ticketing personnel. Forms had to be filed, with doctors’ signatures, for proof that Kevin was really handicapped.

Finally, a price list was sent back. The Super Bowl allows no discounts, not even for someone in Kevin’s situation.

“We haven’t been on a trip or vacation in a long time,” said Melinda. “Kevin said, ‘go big or go home.’ He wanted to go for the top package, which costs thousands, but he repeated, ‘like, Peyton, this might be my last rodeo.'”

For their money, the Clays get to attend the official NFL pre-game party at the stadium, get two club level seats and the right to go onto the field and take photos after the game. Maybe they’ll run into Panthers wide receiver Devin Funchess, a neighbor in their Charlotte apartment building.

The president of the ALS Foundation helped the Clays secure a hotel room.

They leave on Friday and return next Monday — the trip of a lifetime … or a bucket list.