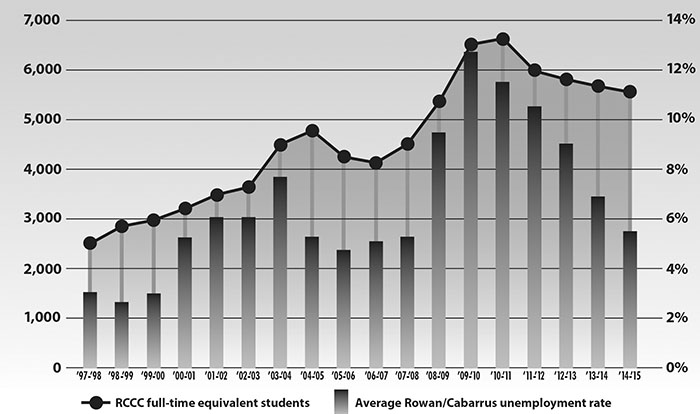 An estimated enrollment drop of 900 students means that Rowan-Cabarrus Community College will be facing a smaller budget and potential staff cuts for the 2016-2017 school year, President Dr. Carol Spalding said.

The school experienced a 25 percent increase in student enrollment as the recession hit in the 2009-2010 school year, and Spalding said that the school is now experiencing the fall-off as things stabilize. RCCC went through a similar enrollment increase and drop between 2003 and 2005, when Pillowtex shut down.

Spalding and RCCC officials estimated that, based on recent drops in the unemployment rate, at least 7,500 people began working in Cabarrus and Rowan counties that were previously unemployed. Spalding estimates that about 900 of those workers would have come to RCCC if they hadn’t found employment.

While it’s good news for the county, it does mean that the school will have to make some changes as they experience a decrease in state funding. And while part of that decrease is the result of those 900 empty seats, Spalding said that the school caused part of the problem itself, “for all the right reasons.”

State funding, which is used to pay salaries, is determined by how many full-time equivalent (FTE) students are enrolled.

“We get paid by seat time,” Spalding said.

In 2010, RCCC changed its entrance procedures. Instead of taking a placement test, students were allowed to submit SAT scores or a high school or college transcript.

It meant that fewer students ended up in developmental review classes and were able to proceed directly to core classes. Instead of taking a 16-week developmental course, students could just review areas where they struggled.

“The unintended consequences of it is that it made a big difference in our enrollment numbers in those developmental courses, which are part of our funding formula,” Spalding said.

“It’s a whole campus, is what it amounts to,” she said.

There are a few other factors that have culminated in bad luck for the college. State-mandated tuition increased this year by four dollars per credit hour, and the school made the decision to stop providing loans to students, as a high percentage of loan defaults would jeopardize RCCC’s ability to give Pell Grants – a form of federal financial aid that on which 70 percent of the school’s students depend, Spalding said. Students who require loans to attend college have sought other institutions, Dibley said.

“Cabarrus is growing,” Spalding said, “Rowan is not.”

This year, more Cabarrus County residents enrolled in courses than Rowan County residents, but college officials are looking to see if other factors may have impacted the uneven enrollment drop between the two counties.

Spalding said Cabarrus campuses offer more classes, and students may be more interested in those classes. It’s also possible that Rowan County students were put off by construction at north campus.

“We don’t know that this is a permanent phenomenon,” Spalding said.

While RCCC plans to go to the state legislature in April’s short session and in next year’s long session to fix the formula, there will be immediate impacts on the 2016-2017 budget.

“We’ll cut the budget,” Spalding said, “and then we’ll get to the point where we’ll need to match our staffing to our student enrollment, and that’ll be the hard part.”

Spalding said that the school will try to balance the budget through attrition first. Between ten and 12 of the school’s 380 full-time employees retire every year, and those positions will be frozen. The college’s hiring rate will slow down as the school examines each position and sees if it should be transformed into something else. The state has also taken over some positions, and those departments may undergo reorganization.

“You can’t let your attrition rate manage your organization, but you know that it impacts it,” Spalding said.

Departments are also looking at administrative and operational efficiency, and seeing where they can save money. At the moment, Spalding said, no specific positions or departments have been highlighted, and no specific number of cuts is available.

The school will also be “tweaking” programs and doing “more with less,” but Spalding said the school doesn’t plan on making program cuts.

“Across the board taking out a specific program, that is not on our laundry list right now,” she said.

But there will be making gradual changes and adjustments before the budget is finalized June 30.

“We may be able to get some restoration of some funding this year,” Spalding said. “That’s what we’re going to try to do.”

The college intends to fight back at the short session this year in April. Full restoration may have to wait until the 2017-2018 school year, but when RCCC had its enrollment increase in 2010, the state wasn’t able to pay them the FTE rate. Spalding said that technically, the state owes the college nearly $1.8 million. At the short session, Spalding plans to make a request. “Restore what our funding should be, and that would help make us whole,” she said.

And for those wondering about monies spent on recent construction projects at north campus, Spalding said, building upgrades were funded by a 2010 bond which has since been spent. And facility funds are provided by the county, and are not available to ameliorate the situation.

RCCC will petition to have the legislature to change the funding formula.

In the meantime, Spalding and Dibley said that the college is doing better than many.

And while this year’s enrollment drop is higher than the state’s average of 11 percent, RCCC is doing better than roughly 20 percent of the other 58 community colleges, Spalding said.

“We’re holding our own,” Spalding said. “We’re doing better than most in terms of how we’re able to serve our communities going forward.”

In the meantime, Spalding wants students to know that the doors are still open. RCCC plans to serve the community and its students the way it always has.

“We hope to manage this so that the students won’t have any negative impact,” Spalding said.

The school offers an expanded enrollment window for the fall semester, and four-week, eight-week and continuing education classes are still available for enrollment.

“You didn’t miss the boat for the semester, “ Dibley said. “If you’d like to be in there, there are still several opportunities to enroll.”

Construction has finished on the north campus, and the school has plenty of capacity along with several new programs. Enrollment in continuing education classes is up two percent, Dibley said, certification and online degree programs are flourishing and 45 people showed up to orientation for the new truck driver training course.

In short, the college is still open for business. Spalding said that the enrollment drop is just normal community college behavior, and RCCC will tough it out and hopefully become a stronger institution because of it.

“This is an area of transition. We’re always in transition, that’s like what we do best,” Spalding said. “So I think making sure we are effective for the community is our biggest mission. So we keep our eye on the ball for students when we make these decisions, but there’s work still to do.”