Q&A with Dr. Robert Musil: ‘People can make a difference’ 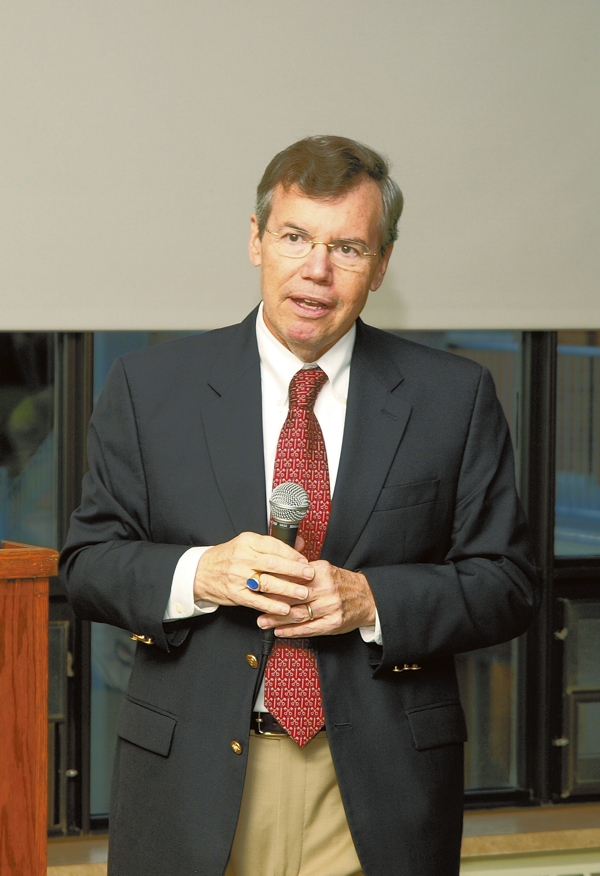 Dr. Robert Musil, head of the Rachel Carson Council, will speak Thursday at the Center for the Environment.

Dr. Robert Musil, president and CEO of the Rachel Carson Council, will speak Thursday, Feb. 11, on “Rachel Carson’s Environmental Legacy for North Carolina” at the Center for the Environment facility on the Catawba College campus.

The Rachel Carson Council (RCC), founded in 1965, was envisioned by Rachel Carson to carry on her work after her death, according to Musil. It works to “promote Carson’s ecological ethic that combines scientific concern for the environment and human health with a sense of wonder and reverence for all forms of life in order to build a sustainable, just and peaceful future. The RCC also has created a nationwide network of college campuses and their administrators, faculty, staff and students concerned with the environment.”

Musil talked recently with Juanita Teschner, director of communications at the center, about the work of the council and his upcoming presentation. This is an edited version of that interview.

Q: Many of us know that Rachel Carson was one of the founders of the modern environmental movement and that she warned the public about toxic chemicals, especially DDT, in her book “Silent Spring.” What else should we know about her?

A: People may forget that she was a hugely popular and respected author before she wrote “Silent Spring.” She wrote three major books on the oceans in the 1950s: “Under the Sea Wind,” a major blockbuster; “The Sea Around Us” and “The Edge of the Sea.” She took on the chemical companies and alerted the public about the dangers of DDT and other toxic chemicals, working with elected officials, including John F. Kennedy himself, the Secretary of the Interior and others.

One of Rachel’s contributions to the environmental movement was not simply exposing and ultimately getting DDT banned. It was all about human health and the effects of DDT and other chemicals on us. She was concerned about chemicals’ effect on the birds and the bunnies and the penguins and the peregrines on the one hand. But she was also concerned about what things in the environment do to people. She said we can’t separate them — that all of creation is linked, is interwoven. Everything affects everything else.

Q: How is she connected to North Carolina?

A: Rachel Carson loved North Carolina and was inspired by it. It was where her writing began. Some people will know the Rachel Carson Reserve in Beaufort. She worked for the U.S. Fish and Wildlife Service, the Bureau of Fisheries then. When she was in Beaufort, she would roam the beaches and watch the birds and listen to the surf and go out at night and look at the fiddler crabs with her flashlight.

Her first book, “Under the Sea Wind,” begins in Beaufort. When she had operations later — she ultimately died of breast cancer — she went to Nags Head to recover. North Carolina itself — particularly the shore — inspired Rachel Carson.

Q: Rachel Carson did her work in the ’50s and ’60s. How is her work relevant to the issues we face today?

A: She believed we needed to combine impeccable science — she was a graduate-trained biologist from Johns Hopkins — along with a sense of wonder and awe and even spirituality about the creation and a desire to protect the things we see before us. So when we look at North Carolina today, Rachel Carson would have been interested in a number of issues.

Q: What are some of them?

A: She was concerned about climate change. She died in 1964, and the government knew about it then. She would be interested in rising sea levels and increasingly intense hurricanes. These things all overlap, which leads to concern for the production of fossil fuels and questions about fracking.

Rachel Carson was an animal welfare advocate. That’s why the council is working alongside organizations that are concerned about industrial hog production, CAFOs (Concentrated Animal Feeding Operations), in eastern North Carolina. She wrote the first serious expose of factory farming of animals in 1963 as a foreword to a major new expose called “Animal Machines.”

Livestock in the United States produce one million pounds of manure every four seconds. Factory-farmed hogs in North Carolina alone turn out more waste on a daily basis than do people in six states — California, New Hampshire, New York, North Dakota, Pennsylvania, and Texas — and most of it goes untreated and unregulated.

Perhaps some residents will remember Hurricane Floyd, with the incidence of floating dead hogs. So there’s an interconnection between extreme weather, rising tides and the concentration of animals that leads to water and air pollution.

Q: What should the average citizen do to effect positive change?

A: For me, it’s more than just recycling or making sure you don’t use too many water bottles — or even driving a Prius instead of a gas guzzler. That’s important. We all can and should look to our own lifestyles, but it’s really important to think of ourselves as citizens and neighbors who can take action together.

Citizens from North Carolina need to believe that political change that would help the environment is possible. People can make a difference. It doesn’t do any good to simply teach about these things or to grouse in front of your TV. You need to get engaged. There are local organizations you can join. That’s a key thing that a lot of people don’t do: They think it doesn’t matter or they don’t have the time.

Sometimes working to change things or improve local environmental and health conditions can feel frustrating, overwhelming and lonely. But there are folks all over the country that people can be involved with, as Rachel Carson was. Not every student can talk to negotiators in Paris, but they can all join in with organizations online with things that have happened globally.

Q: What are the major environmental issues that we need to focus on now?

A: “Silent Spring” concentrated on one chemical. The effects of various toxic chemicals in our food and in our products, which can exacerbate or lead to developmental problems, are still a major issue. When there are big events — like back in the ’80s in Bhopal, India (Methylisocyanate gas and other chemicals were released, killing thousands of people.) — people understand that these chemicals in acute doses are really bad for you. The problem is that chemicals are everywhere in little doses, and over a long period of time you see rises in cancer and other diseases.

Climate change is another huge issue. People don’t connect it immediately to public health, but the fact is that all the rises in temperature lead to greater ozone and lung problems. The fossil fuels we burn that cause climate change lead to particulates, basically soot and other things that go into your lungs. This can lead not just to lung problems but to cardiovascular problems, heart problems and death.

Water — sufficient, clean, drinkable water — is another problem. We’re seeing that already in California with the prolonged drought and loss of snow pack in mountainous areas.

I’m also concerned about population issues. Overpopulation strains all our resources. It’s at the bottom of almost every issue. Most of the problems of climate change come from consumption — too many products, too many cars, too much fossil fuel use. As the developing world grows, we’re headed to somewhere between 9 and 11 billion people by the end of this century. That’s another whole planet worth of people from when I was in college.

Q: We have so many issues and they are so complex. How do we keep from feeling overwhelmed?

A: Rachel Carson faced very similar things. She could have been depressed or given up or said, “No one will ever fix this.” That’s why I try to focus with future leaders on the fact that there’s a Rachel Carson somewhere in the audience. They just have to believe that this stuff matters so deeply because of their values.

Things looked pretty bleak in 1962, but it was part of Rachel’s upbringing and her belief that she couldn’t sit and let this all happen. She said to her best friend, Dorothy Freeman, quoting Lincoln, “Remaining silent when they should protest makes cowards out of men.” If people love and care about what is closest and dearest to them, then they have to do something about it.