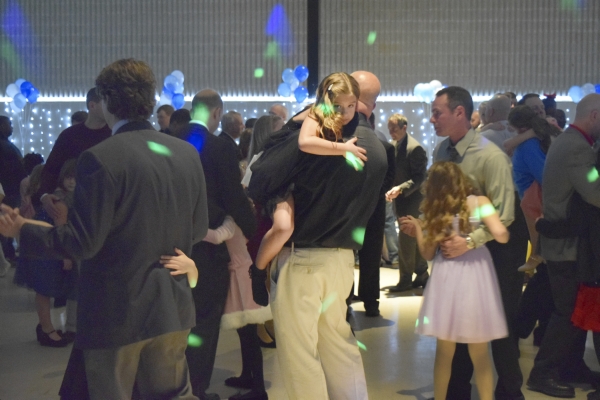 This is the twentieth conesecutive year that Salisbury Parks and Recreation Department has hosted a Father Daughter Dance in Salisbury. Rebecca Rider

Salisbury’s Father-Daughter dance kicked off its 20th year last night with disco-style lighting, a few slow dances and a conga line. Girls from 4 to 13 are dressed to the nines, and grab their father’s hands, pulling them onto the dance floor. Held at the Salisbury Civic Center, the dance has become a night that many look forward to every year.

“We sell out every year,” she said.

“If you have a daughter between the ages of 4 and 13, this is the place to be,” Koontz said.

They’ve picked a few things up, over the years — custom printed tickets, a caterer. They’ve even added a photographer and a room for younger children to color. But some things have become a tradition. The DJ, Cindy K, has been running the show since 2003. And it’s an event that many have woven into their lives.

Drew Long said that he and his daughter, Caleigh, 6, would attend the dance together. When the family moved out of town, he and Caleigh decided to come back — and this time they brought younger sister, Kinsley, 4.

“We came back to continue on the tradition,” he said.

Caleigh and Kinsley pull Long into a dance, dresses swirling, and the three jump around, moving to the music. But Long said that their family tradition is more than just the dance. Tonight, the three of them drove down in Long’s 1994 Mustang, the same car he drove when he picked his wife up for their first date. He tells the story to Caleigh and Kinsley, and said he thinks it adds an extra bit of magic to the night.

Keith Neely said that he’s never been to the father-daughter dance before, but thinks that he and daughter Jada, 5, will be coming back. Neely’s wife saw an ad for the event and bought tickets for him and Jada. Neither of them knew what to expect, but they’re having fun. Jada shows off a white rose corsage Neely got her.

“I’m enjoying myself,” he said.

Neely said he thinks events like the dance are important and promote a positive bond between parent and child.

Near the front of the room, J.P. Conkel dances with daughter, Lila Conkel, 6, as well as with Dalilah Lamana, 7, and Erin Wagner, 8. The four hold hands and spin in a circle. While he’s only related to one of them, Conkel says he thinks of the other two girls, his roommate’s daughter and his girlfriend’s daughter, as his.

It seemed like the natural thing for all of them to go to the father-daughter dance together. Conkel said the three were very excited to attend, and they buzz with energy as they make their way across the dance floor.

They’re already looking forward to next year, he said.

The Salisbury Parks and Recreation Department also sponsors a mother-son dance, which will be April 30.