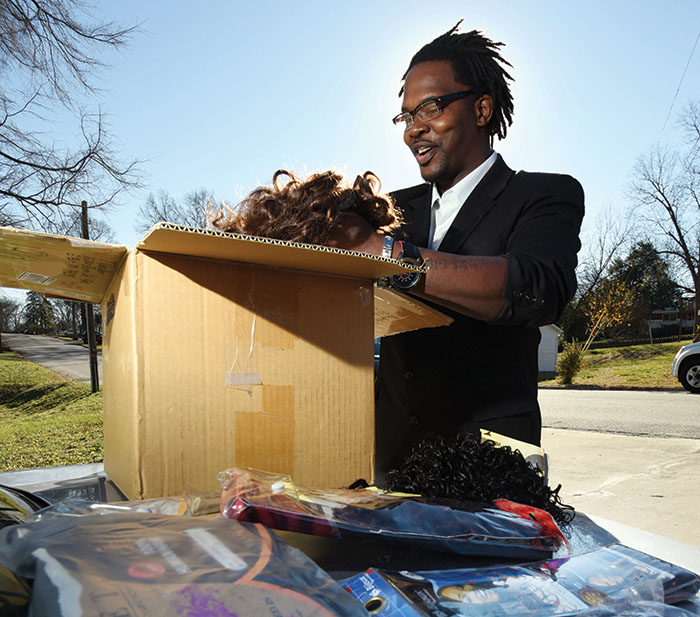 JON C. LAKEY / SALISBURY POST Gregory Vanzant spent 13 years in prison serving out a sentence for voluntary manslaughter and assault with a deadly weapon. Since his release, Vanzant has had great difficulty finding employment. To make ends meet, he has started his own business as a hair stylist. Here, Vanzant looks over some the hair extension products he offers for customers. Most of the employment applications have a checkbox for convictions of felonies which many attribute to the reason former prisoners are challenged with becoming gainfully employed.

They all have a past of criminal convictions, and they’ve all had a hard time finding employment since being released from prison.

According to the Justice Department’s Bureau of Justice Statistics, there were about 1.6 million inmates in U.S. state and federal prisons on Dec. 31, 2014. When those inmates are eventually released, they begin the processes of applying for jobs. But some are finding that trying to secure a job with a criminal history can be more difficult than they thought.

Muhammad said he has skills and degrees, but when he was released from prison he was unable to find a job.

He had to go overseas to find a job.

Davis said employers did call him for interviews, but that is as far as it went.

“You go through a lot of headache with that,” he said. “You get a lot of callbacks, but once you tell the people that you have a felony, that’s basically the end of it.”

Vanzant said Davis was lucky to get employers to call him back. He said with employers performing background checks over the potential employee’s lifetime, he feels like he is still being punished for something that happened almost two decades ago.

“They’re just not allowing us any kind of room to really maneuver or find no type of employment just for our livelihood,” he said.

According to the Fair Credit Reporting Act, employers can use an individual’s customer report for employment purposes. The report does not include criminal convictions that predate the report by seven years. But employers can look as far back into a person’s past as they want to, Rosa Adkins, career connections manager at the Goodwill Career Connection Center, said.

Clark tells other people coming out of prison to get ready for rejection.

According to the Equal Employment Opportunity Commission’s Policy Statement on conviction records under Title VII of the Civil Rights Act of 1964, denying an individual employment because of their criminal record without a justifying business necessity is unlawful.

The reasoning states, “… an employer’s policy or practice of excluding individuals from employment on the basis of their conviction records has an adverse impact on blacks and Hispanics in light of statistics showing that they are convicted at a rate disproportionately greater than their representation in the population.”

In fact, according to the NAACP’s Criminal Justice Fact Sheet, African Americans and Hispanics make up about a quarter of the country’s population but made up 58 percent of all prisoners in 2008.

With as many rejections that these men have received, they cannot help but think it’s their criminal records that are holding them back.

And while they are out looking for jobs, recently released individuals still have responsibilities. On top of taking care of themselves, some also have to provide for their families.

“It really make you want to quit, but if you don’t have that drive that you need, that’s basically what you’re going to do,” Davis said.

After tracking 405,000 prisoners who were released in 30 states in 2005, it was found that 68 percent were arrested for another crime within three years of being released, according to a collection of data from the Bureau of Justice Statistics. About 77 percent were arrested within five years.

Vanzant said it might be that the person who is arrested for shoplifting is just trying to feed a family.

“It’s just instinct to go back to what you know,” he said.

Another problem the men found was they could not find any programs to help recently released individuals find jobs.

Rosa Adkins, career connections manager at the Goodwill Career Connections Center said resources are available. At the center, Adkins said individuals with or without criminal backgrounds can receive help with interviewing techniques and filling out resumés and applications.

Adkins said many people do not know about the services the center provides.

“That’s why it’s so important that they try to find all the information they can when they leave the prison system,” she said.

Jennie Taylor is an employment specialist at Project Re-entry, an employment assistant program for individuals released from prison. The program is in 13 prisons in the state and 23 counties. She said she goes into prisons and teaches a 16-week program where inmates can learn about application and resumé skills, interviewing skills and how to talk about a criminal record in a positive way.

“Whenever they come out, they’re more prepared for the interviewing that they have to go to,” she said.

There is also a program through Project Re-entry for individuals who were recently released from prison to gain those same skills.

Taylor said often times inmates come out of prison with technical skills, like brick masonry or construction. What they really need are soft skills — how to be dependable, punctual and a team player.

One thing Taylor teaches in her classes is what she calls the “hit it and quit it” method when it comes to discussing a criminal record. She advises her students to mention what they did but quickly move on to what they learned from the experience and how they have grown since then.

“They really have to sell themselves in an interview,” she said.

Adkins said there are employers out there who are willing to give second chances.

“I think most employers, as long as you’re showing that you’re ready to make that change and prove yourself, I think a lot of employers are willing to give them that chance that they need,” she said.

Muhammad said he thinks he and the other men who have gone through the prison system have an advantage when it comes to helping recently released individuals because they know what they are going through.

He and some other men want to start a company in which they contract with the city, county or other businesses to train individuals on the soft skills they need to succeed in those entities. In that way, they can take the responsibility and risk from the businesses and take it on themselves.

Muhammad and Clark talked about the program being science-based and offering individuals the opportunity to find out what they like and what they are good at. They would also work to break and change negative mindsets.

They said they believe their experience in the prison system will allow them to get through to the 18- to 30-year-old population.

Clark said along with preparing individuals for employment, they also hope to help some create their own services or products, as he and Davis, Vanzant and Muhammad found themselves having to do.

Davis became a DJ and Vanzant started his own hair styling business called Vanzant Hair Collections. Clark is the owner and founder of Ausar’s Way Consulting, along with founding COMPASS, a nonprofit youth program. Muhammad has been working to improve the lives of the residents of East Spencer.

Vanzant said he thought the possibility of him landing a job with a business or company was a “long shot.”

“You kind of have to condition yourself to think outside of the box just to be able to find a livelihood of any sort,” Vanzant said.

Davis said continuing to look for a job when no one wants to hire is a waste of time.

“It’s not worth the time, I don’t think. I think that you should work to have your own rather than trying to spend all that time looking for a job,” he said.

The men decided to create their own businesses in order to be employed, and Muhammad said that can sometimes be the better answer.

“What you have to do practically is you have to create your own business and hire yourself,” he said, “because you never have to answer the question, ‘Are you a felon or not?’”