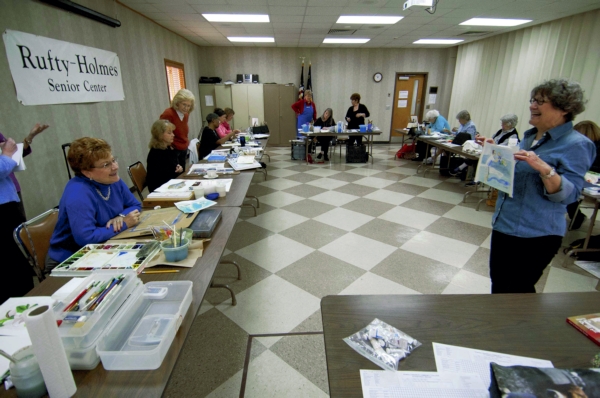 Sue Lewis, right, holds up a watercolor that Pam Cordts, left, was working on in class. Cordts was trying to decide if she was finished with her painting by seeing her artwork from a distance. Leslie Frontz’s watercolor class at Rufty-Holmes Senior Center is so popular that the 19 spots for participants to register for are filled in three hours. Jon C. Lakey/Salisbury Post

The room is filled with light, conversation and creativity. If you’ve ever wanted to learn to paint in watercolor, this is the place to be.

Every Monday morning, from 9:30-ish to 12:30-ish — some folks arrive later, some leave early — 18 women can be found learning, collaborating, painting, and just plain having a ball at this watercolor class taught by Leslie Frontz at Rufty-Holmes Senior Center.

And there’s good news: Frontz will start a class for “absolute beginners,” and anyone else who’d like to participate, later this month.

The “Watercolor Your Way” class is full of painters at every level. Frontz provides some instruction at the beginning of the morning, then spends the rest of the time working with students one-on-one, giving advice, answering questions.

This morning, she talks about how to paint like Joseph Turner, the great English landscape painter, before mingling with her fellow artists.

There’s a lot to see. The tables are littered with brushes, water cups, rolls of paper towels, palettes and photographs. A favorite subject of artists is flowers, and there are plenty of those. But there’s a lot of other variety, too. A stone bridge. A scene from out West, with lots of reds and oranges and browns. Gourds. A blue-black raven. A shaggy doggy face. A guitarist.

Sue Lewis is busy painting a portrait of her niece, Amy, at age 5 or 6. Now 21, the young woman will graduate from Catawba College in the spring.

“I just thought it was a cute picture with the hat on,” Lewis says. In the photograph, Amy is wearing a darling hat covered in flowers.

“I have been taking classes forever,” Lewis says. “I’ll stop for awhile and go back to it. This is the first time I’ve taken from Leslie. She’s really good.”

Beside Lewis, Pam Cordts is working on a beach scene of family members playing in the waves. She hopes she won’t ruin it, she says. It’s looking pretty good this morning.

“I’ve been retired for four years,” Cordts says. “I never had painted before, and I love it, I really do. Of course we think we have the best teacher. This class is very encouraging to one another. Some of us have been painting for years. Even if you have a problem, somebody has something kind to say.”

Barbara Benton is a retired teacher who paints and does photography. She was taking a picture of water in a glass that was sitting on her deck, and she noticed the interesting reflection of the trees in the glass.

She quickly chose a nicer wine glass, and transferred the water to that.

She’s now finishing a painting of the photograph, and plans to enter both in contests.

“Leslie is wonderful,” Benton says. “She lets me be creative, and she is a very traditional painter. I use watercolor and oil and pastels, and she lets me do it, bless her heart.”

Across the room, Joyce Cavanagh-Wood is working on a pet portrait.

“This is Rupert,” she says. Rupert belongs to a friend in California who got Rupert as a foster pet, but fell in love with him.

She’s painting Rupert for her friend, her third attempt.

“The trick is to get the eyes to look like eyes,” she says.

Cavanagh-Wood began painting about 10 years ago. She and her husband live near High Rock Lake.

“It’s a wonderful place for painting,” she says. “I’m hooked! Aren’t we all?”

Beside her, Connie Eads is working on a painting of a guitarist. She took his photograph on a trip to San Diego.

Eads says she’s been painting off and on as long as she can remember.

“I retired a little over a year ago, and I do photography and painting,” she says. “I travel between the two. They go wonderfully well together. This is the best class. I love it.”

“Oh!” Cavanagh-Wood exclaims. Some white paint ran near Rupert’s eye. Can it be salvaged? Yes. She and Eads discuss what to do.

“The more you paint,” Eads says, “the more techniques you have to rescue things.”

“You can always paint on the other side of the paper,” Cavanagh-Wood adds.

“You learn more from your mistakes,” says Carolyn Blackman, who’s painted for years. “Even the best painters make mistakes. And it’s not really a mistake. The painting just didn’t do what you wanted it to do. Somebody may come along who likes it.”

She adds, “When you’re with other people, you’re improving. Classes keep you active.”

A few tables away, Karen Morgan is working on a spider plant. She’s working beside her sister, Deena Lanning.

“Normally, I paint animals and she paints flowers,” Morgan says. “I don’t know how this happened. I have a pasture full of donkeys next to my house. I feed them cookies. They’re my favorite subject, but lately my muse has left me.”

“I am not an artist,” Lanning says. “When I retired, I wanted something to do with my sister. I enjoy the people, so I keep coming.”

The raven she’s working on is not bad. She even adds “Nevermore” at the bottom later on, for fun.

“We’re all on the same page,” Frontz says. “Everybody gets along and has a sense of humor. This positive attitude helps their painting. We all feel like, ‘I can do this.’”

Frontz received a master’s degree in fine arts from the University of North Carolina at Greensboro in 1986, and began teaching when she was asked to fill in for her instructor. She’s taught at Rowan-Cabarrus Community College and Davidson County Community College, but now only teaches at Rufty-Holmes.

“Once people are in the door, there are a lot of ways for them to continue on in their painting,” Frontz says.

“I love their enthusiasm, their interest in learning, their perseverance,” she says. “If there’s discouragement, it’s over in a moment. We just have the best time.”