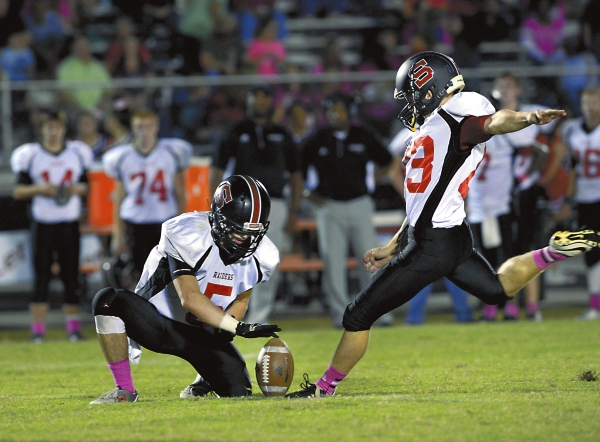 LANDIS — South Rowan’s Brennan Lambert was mostly a soccer player, but then they made a football rules change in the local middle schools that awarded two points, instead of one, for successful PAT kicks.
It was a move designed to promote the development of young kickers. It obviously worked.
“That change in the rules in seventh grade is when I started kicking footballs seriously,” Lambert said. “I’m pretty sure it’s why I’m here today.”
Where Lambert was on Friday afternoon was at a signing party in the South Rowan media center. Surrounded by friends, teammates and family members, including sophomore sister, Cordi, a South cheerleader, Lambert signed with Catawba.
That was a decision that brought a grin to the face of South head coach Daniel Yow, a former Catawba offensive lineman.
“I’ll always be partial to the Indians, and they got themselves a good kicker,” Yow said. “Brennan works his tail off, so this is a win for everyone. Catawba’s close, where we can all see him play, and he’s going to a winning program.”
When Yow took the South Rowan job, he knew his first season was going to be an uphill fight, but he also knew he would have major assets in punter Marshall Long, who signed Wednesday with Georgia, and placekicker Lambert.
“People told me I was going to have the best kicking game in the state,” Yow said. “That wasn’t a lie.”
Lambert is a good athlete, short but strong, and he played a lot of receiver for the Raiders as a junior. There was a memorable 36-13 loss to Carson in which Lambert scored all 13 South points with a touchdown catch, two field goals and a PAT kick.
Lambert produced nine field goals as a senior, and that was for a team that rarely moved the ball consistently. In three different games, he kicked two field goals.
The Post has recorded only six field goals of 50 or more yards in Rowan County history. Lambert accounted for two of those kicks this season. He was accurate from 50 yards against Salisbury, and he split the uprights from 51 yards against Northwest Cabarrus to tie Lucas Soares’ school record.
“This was my best year kicking,” Lambert said. “Experienced helped, and this was the first year I didn’t think too much. Kicking is more mental than physical, and playing a lot of golf has helped me with my kicking. They’re both mental games.”
There are three components to college kicking — punting, placekicking and kickoffs. Lambert will be a candidate to handle the latter two chores for the Indians as a true freshman next fall. More than 75 percent of his kickoffs as a senior were touchbacks.
“It’s kind of an open job right now (Catawba’s long-time kicker Chad Hollandsworth is a senior),” Lambert said. “It’s not like anyone’s giving me the kicking job, but I’ll have a chance to go in and compete for it.”
Catawba head coach Curtis Walker, who guided the Indians to a South Atlantic Conference championship and a Division II playoff berth last fall, does most of the recruiting of local players, and that was the case with Lambert. Having quality local players on the team helps in a lot of ways.
Lambert also seriously considered Gardner-Webb and Wingate, one of Catawba’s SAC rivals, before choosing the Indians.
“When I went to Catawba for my official visit, part of it was a tryout,” Lambert said. “They took me out on the field and had me kick some balls, and I guess they liked what they saw. I’m thrilled it worked out. I think Catawba is the best possible fit for me.”