Pedal Factory hopes to help those without bikes 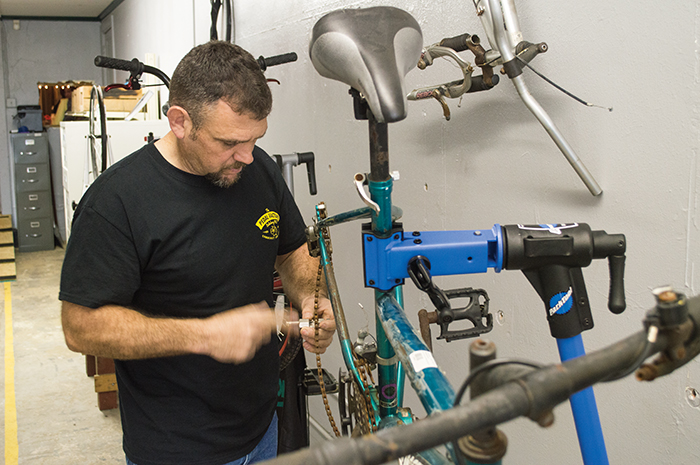 Josh Bergeron / Salisbury Post - David Harrison, a founder of nonprofit group The Pedal Factory, works on a bike Friday morning in the organization's South Main Street store. The Pedal Factor will provide free bikes to people who donate six to eight hours in the business.

Perhaps, it was a coincidence that brought Salisbury’s newest nonprofit to life. Or, maybe great minds think alike.

The Pedal Factory, located in downtown Salisbury, is a creation of members of the local bicycle community. It aims to provide bikes at no cost those who may not be able to afford his or her own. The Pedal Factory will give a bike to people who spend six to eight hours volunteering at its 218-B South Main St. store.

On Friday, the nonprofit held its grand opening. Today is The Pedal Factory’s first day of operation. It’ll be be open 2 p.m. to 6 p.m. on the first and third Saturday of every month. Cyclists can stop by to work on a bike and others can pick out a bicycle and begin his or her volunteer hours, said Rhonda Harrison, one of the nonprofit’s founders.

For those without enough money to purchase a bicycle, The Pedal Factory may be a method to obtain transportation, said co-founder Sharon Earnhardt.

“There’s no reason why all people can’t be cyclists,” Earnhardt said.

The Pedal Factory founders call the nonprofit a “community bike center.” However, it’s nearly identical to bike recycleries around the state. Earnhardt said multiple members of the founding group seemed to be thinking about forming a bike recyclery at the same time and decided to give the idea a shot in Salisbury.

Harrison says the nonprofit hopes it can be a location for those from Salisbury to Concord without a bike to obtain one and a regional place for cyclists to make repairs. She said the nonprofit has more than 90 bikes in various states of disrepair. Some may only require a part or two and an hour of work. Others may require significant work, she said.

Regardless of the bike’s condition, Harrison said aspiring cyclists may spend their volunteer hours working on his or her own bike, stripping parts from irreparable bikes or helping another person make repairs.

A person will be present at The Pedal Factory’s downtown store to help with repairs, she said.

“If I can do it, anyone can do it,” Rosser joked. “Certain things might be complicated, but it’s not too bad.”

Harrison said the nonprofit will accept donations for visitors who need a place to make repairs on a bike he or she already owns.

“I think it will do lots of good for the bike culture in Salisbury,” Phillips said. “It’s a good resource for people who can’t afford a bike and just need something to get around town on.”

Getting around Salisbury on a bicycle, however, remains a treacherous task in most places. The City Council has passed a plan that places interconnected bike lanes around Salisbury. “Sharrows” exist on some roads, but many of the planned bike lanes haven’t yet been finished.

Earnhardt and Harrison said increasing the number of bikes on the road may help bring more bike lanes to Salisbury. Motorists, however, also need to see bicycles as a normal part of traffic, Earnhardt said.

“Bicycles shouldn’t just be on the sidewalk or some trail on the side over there,” she said.

For more information about The Pedal Factory, visit thepedalfactory.org.