Super Bowl brings in bucks for some local businesses 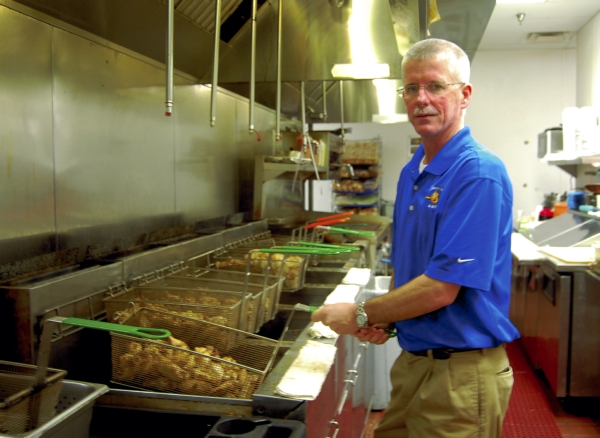 Amanda Raymond/Salisbury Post Some local businesses are expecting an increase in sales because of the Super Bowl on Sunday. Scott Hudson, owner of East Coast Wings and Grill, said people have placed orders of up to 500 wings for game day.

Many are preparing to watch the Carolina Panthers play in the Super Bowl on Sunday with big screen televisions and Super Bowl parties, which is a good thing for most local businesses.

Scott Hudson, owner of East Coast Wings and Grill, said people have placed pre-orders for up to 500 wings for game day.

“We’re so busy that day that you don’t need specials,” he said.

Hudson said they will close the dining room and will only be serving wings after 2:30 on Sunday. The bar will still be open.

He said he expects revenues to increase more than 50 percent this Sunday, compared to a normal Sunday.

He said because of the economy and competition, business has been slow.

“I’m wanting to get some business from the Super Bowl, actually,” he said.

He said there has been five or six pre-orders made and customers have been calling the restaurant to check prices.

Restaurants aren’t the only places getting a jump in sales.

But Randy Everhardt, store manager at Rent-A-Center, said he expects business this weekend to be pretty much the same.

Some customers have asked about one-day rentals for TVs, but Everhardt said the store does not do them because it would not be cost beneficial for the customer.

For the money they are spending to rent a TV for a day, they could just buy a TV, he said.

Everhardt will do one-day rentals for places like assistant living facilities because it makes more sense for a facility or company to rent for a day than for an individual to do so.

He said he sees renting to assistant living facilities as “serving the masses.”

No managers in the store could speak on expected increases in sales, but Dick’s Sporting Goods had tables near the front of the store with Carolina Panthers shirts. The store also had phrases like “Keep pounding” written on its front windows.

Hudson said for people who want wings for parties, don’t wait until the last minute.

“Try to get your wings orders in as early as possible,” he said. “We could sell out.”