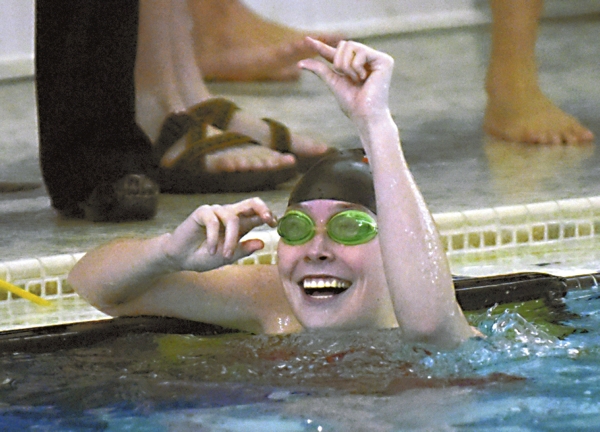 SALISBURY — Amelia Steinman followed twin brother Will into the world by about a minute back in 1998, and their tight race has continued for nearly 18 years.
“We used to be really competitive in sports, but now it’s just in academics,” Amelia said. “We take all the same classes, and they’re the tough AP classes, so it’s very competitive between us.”
Amelia’s 4.9 GPA ranks 10th in Salisbury High’s senior class. She’s been accepted at UNC and N.C. State. That’s a win-win wherever she decides to go to college, but she still has unfinished athletic business as a Hornet.
Amelia and Will used to compete neck-and-neck in the pool, and Amelia still remembers the thrill of beating her brother for the first time.
Tall and fast, Will moved on to become a fine football player (wide receiver) and baseball player (catcher, center fielder, pitcher) for the Hornets.
Amelia competes in three sports. She’s done well in cross country (regional qualifier) and soccer (three-year starter as a defender), but swimming is where she excels. That’s a sport she’s been involved in since she was 6 years old.
Steinman was a big part of Salisbury’s recent victories in the Rowan County Championships and the Central Carolina Conference Championships.
She won the 50 and 100 freestyle races in the conference meet and was on two first-place relay teams. In the county meet, she won the 50, placed second to Carson’s Brynne Hardman in the 100, and again was on a pair of winning relays.
She’s the freestyler on Salisbury’s 200 medley relay team and she swims a leg on the 400 freestyle unit.
“She’s one of the hardest-working people I’ve ever coached,” Salisbury coach Ryan Starrett said. “She’s not a full-time swimmer, but she tries her hardest every day. That’s why she achieves times even some club swimmers don’t get down to.”
Steinman no doubt could be even more special in swimming, but she’s never made it a year-round endeavor because she enjoys soccer so much.
“Cross country, I’ve just done to try to stay in shape, but I love swimming and soccer equally,” Steinman said. “I like being part of the team in soccer, but in swimming, in the 50 and the 100, it’s just me out there, and I enjoy that aspect.”
Steinman has been All-CCC in 15 of a possible 16 events in her four-year career, but she’s modest about her contributions to Salisbury’s program and to three straight CCC championships.
“We’ve had amazing swimmers in the program — McKenzie Stevens when I was younger and (sophomore) Kathryn Morrison now. They’ve led us and guided us, almost like they were coaches, and they’ve helped our program grow a lot. We look up to them as role models and they’ve helped all of us get better.”
Steinman said she competes against herself more than she does the opponent in the next lane.
“It’s mostly about cutting time and pushing myself to do the best I possibly can,” she said. “That last meet (the Central Carolina Conference Championships) I surprised myself. I looked up at the clock and said, ‘Wow, really?'”
Steinman’s 50 time was 26.75 seconds and her 100 time was 58.54. Both efforts were quite a bit faster than her times in the county meet.
Steinman and the Hornets are peaking at the right time. They’ll compete in the 1A/2A West Regional today in Huntersville. The Hornets should shine in the 200 medley and 400 free relays, where Steinman expects to team with a combination of Morrison, Callie Alexander, Sharmi Amin and Michaela Lemmon.
The Hornets placed sixth in the state in the 400 free last year and they were eighth in the 200 medley relay.
Steinman has been a state qualifier individually in the past, and she hopes to finish her career in Cary in the 1A/2A Championships on Feb. 13.
“It’s exciting, but it’s also sort of sad,” Steinman said. “I’m going to miss swimming. It’s been a big part of my life.”
Also competing in today’s regional will be Joe Steinman, a sophomore member of Salisbury’s boys team. He was runner-up in the CCC Championships in the 100 butterfly and he’s the younger brother of Amelia and Will.
“We compete with Joe, too,” Amelia said with a laugh.