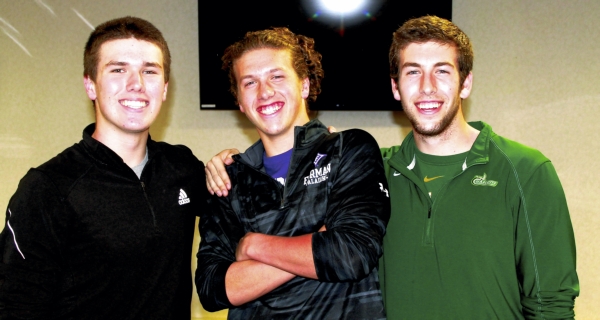 Submitted photo... The goalkeeping Fisher brothers, left to right, Jack, Max and Banks. They were celebrating Max's signing with Furman in the media center at Salisbury High School on Wednesday, Feb. 3, 2016.

Brothers Banks, Max and Jack, sons of Steve and Robin Fisher, are all soccer goalkeepers and have made each other more skilled by training together.

The middle brother, Max, was the center of attention on Wednesday at the Salisbury High School media center when he signed a national letter-of-intent to continue his soccer career as a student-athlete at Furman University.

Jack is the youngest brother and is only a freshman at Salisbury. He was a reserve goalkeeper on the Hornets’ state championship team last fall and he’ll be on the baseball diamond this spring for new coach Mike Herndon.

But Max is following in the footsteps of big brother, Banks, who signed an NCAA Division I scholarship two years ago and is a Charlotte 49er.

“Banks and I have worked off each other a lot,” said Max. “A lot of training sessions with Banks and Frankie Cardelle (another keeper, at Salisbury and Catawba), the three of us practiced a ton together and as we got older, it got a lot more competitive. Now, Banks and I are at DI schools that play each other during the spring season.”

So how about that sibling competition now?

“Banks is better right now because he has age and college experience, but who knows how it will turn out?” said Max, with a sly smile.

Max started playing soccer at a very young age in the FCCA organization at Hurley Community Park. He was brought along quickly by his first coaches — his father, Steve, and Frank Cardelle, Frankie’s dad.

Max landed at Salisbury High in 2012, the same year that Banks decided to move away from high school competition to play with the N.C. Fusion Soccer Academy. Banks would have been the starter as junior that year but his move opened the door for Max to be the only freshman to ever start in goal for coach Matt Parrish.

“A couple of things stand out in my mind the most about Max,” recalls Parrish. “When he came in, he had kind of a double-edged sword in two regards: We were coming off a couple of pretty successful seasons and were expected to be good again, and the fact that his brother still went to this school but had chosen to go play academy soccer.

“So essentially, you have the keys to a successful program and you have a freshman in goal, the only one that has started for me in my 15 years,” continued Parrish. “He had the expectations of the older players on the team as well as the friends of his brother’s on the team that were kind of counting on him.”

Max came through with flying colors. As a freshman, Salisbury went 18-3-1 with him in goal and advanced to the third round of the state playoffs. The next year, the Hornets were 27-1 and won the 2013 state (2A) championship.

“Max had a lot of pressures that weren’t the usual types of pressures,” added Parrish. “It was a lot to ask of a 14-year-old kid to start in goal when you’ve got seniors who just won the state title as juniors. Obviously, he handled it well as we were 45-4-1 in his two seasons.”

And Max was still there in the background last fall, cheering his former teammates on as Salisbury went undefeated and won another state title.

“Of course, I know all the guys on the team and I played with most of them for a long time, so it was not as awkward as it could have been,” said Max. “But when they won the state championship and you’re not on the team, they sort of gave me some good-natured ragging —but we’re all good friends.

Max said winning the state title as a sophomore allowed him to know what it felt like for the Hornets last November. “And I still supported them, cheered them on at some of the playoff games and at the last match in Raleigh,” said Max. “Some of the guys are some of my best friends.”

According to Max, Furman saw him play at a showcase event in Florida, when Fusion was playing a team from Chicago last November. That led to a visit to the Furman campus in Greenville, S.C., last month and the Paladins’ head coach, Doug Allison, made Max the offer.

Max had also looked at James Madison, East Tennessee State and at walking on at N.C. State. But Furman felt right to Max, after attending a camp there in January. As a bonus, his cousins reside near Greenville, so he’s familiar with the area.

So with Max and Banks getting ready to do battle when Charlotte meets Furman, what’s next for the goalkeeping Fishers?

With the graduation of senior Arturo Ramirez, Jack Fisher will compete for the starting keeper position at Salisbury with fellow freshman Josh Faulkner.

And the beat goes on.