For Hall of Famer Ryan, sports was like a family business 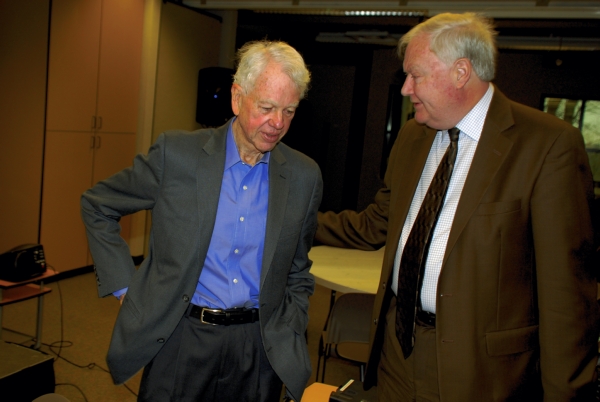 SALISBURY — Let’s get this out of the way first. Hall of Fame sportswriter Bob Ryan predicts a Carolina Panthers victory in Sunday’s Super Bowl.

Consider the changes Ryan has seen over his career in just filing a story. Today, reporters can do it instantaneously by laptop or cellphone. When Ryan first started in the sportswriting business, he composed his stories on a typewriter and sent his copy from the closest Western Union office.

Those also were the newsroom days of paper, paste pots, carbon copies, pneumatic tubes to the composing room and Linotype machines.

“You say, ‘How did you do that?,” Ryan said Wednesday. “Well, you just did. We did it because we didn’t know any better.”

Ryan, known nationally for his 44 years with the Boston Globe and his many appearances on ESPN, was in town this week as part of his duties as chairman of the National Sportscasters and Sportswriters Association board of directors.

He spoke Wednesday to a classroom audience at Catawba College made up of marketing students, high schoolers thinking about attending Catawba in the fall and a handful of Salisbury residents just interested in hearing Ryan’s talk.

Dave Goren, executive director of the NSSA, arranged for Ryan’s on-campus appearance, and Ryan described his path into sportswriting, working as an NBA beat writer and eventually becoming a columnist who has covered golf’s major championships, 11 Olympic Games, college football bowl championships and the Super Bowl, something on everyone’s mind around here this week.

Even though he was a veteran newspaperman, Ryan also embraced television, beginning in 1989 as a panelist for ESPN’s “The Sports Reporters” on Sunday mornings. That show — and Ryan’s participation in it — is now in its 27th year.

Ryan also has appeared regularly on “Around the Horn” (154 wins) and has filled in as one of the co-hosts on “Pardon the Interruption.” Both of those daily shows are on ESPN, too.

“It has all worked out,” said Ryan, who will be 70 later this month.

Ryan has authored 12 books. His latest is an autobiography titled, “Scribe,” something the football coach at his Lawrenceville, N.J., prep school used to call him even back in the 1960s.

A native of Trenton, N.J., Ryan seemed destined for sportswriting. He was born into what he considers a sports family. His father was a marketer and promoter who organized various sports leagues. He eventually would become an assistant athletic director at Villanova University.

For Ryan, everything as a kid seemed to involve going to a game, coming from a game and getting ready for the next game.

“It was kind of like the family business, and I took to it,” he said.

Ryan emphasized that sportswriting is a two-part word. The “sports” part took care of itself. He loved playing sports and seemed most suited for basketball.

As for the “writing” part, Ryan said he always had an affinity for words. He was and remains a voracious reader of newspapers. Even though he would attend high school games on Friday nights as a kid, he couldn’t wait to read about those same games in the Saturday morning paper.

By the time he was 9, his parents bought him subscriptions to the monthly Sport Magazine and the weekly Sporting News. He also received the book “Modern Baseball Strategy” for Christmas.

At prep school, the emphasis in every subject was on writing, not multiple choice, Ryan said. He was editor for the school newspaper, and at the 11th hour decided to attend Boston College instead of Georgetown University.

He landed in a sports-crazy town, and an internship at the Boston Globe led to a full-time job at the newspaper. At 23, he was beat writer for the Boston Celtics.

“I wasn’t ready for that, frankly,” Ryan said.

He couldn’t rely on any manual on how to cover an NBA team. On the job, he had to learn how to use information and how to develop relationships with players.

Ryan feels as though he “lucked out” with the Celtics. The first year he covered the team, the Celtics won only 34 games in a transitional season after the Bill Russell glory years.

By the third year and after the arrival of Dave Cowens, the Celtics won 68 games, and by the fifth season, they were world champions again. It raised Ryan’s own profile.

“There are lots of great writers out there,” Ryan said. “To get known, you need a vehicle. My vehicle was the Boston Celtics and the NBA.”

When he was covering the NBA in the 1970s and 1980s, Ryan said, it was a much more accessible league. Reporters flew on the same commercial planes as the teams they were covering, They often rode with the players on the same bus to the hotels, went out for dinner and drinks with the players and coaches, had open access to all the practices and sat next to the bench during games.

Ryan blames two things for the change: chartered flights and the Chicago Bulls.

The Bulls of the 1990s became the KGB — a highly secretive team which no longer had open practices, Ryan said. The team imposed new rules on accessibility and stepped up security. And those procedures became the norm for other teams.

Ryan traveled to Salisbury for NSSA functions for the first time in 1997 and says he feels “very connected to Catawba” today. He officially retired from the Globe after the London Olympics but still writes an occasional column.

Here are some Ryan views on several other topics:

• He said it’s hard to say what the function of sportswriters is any longer, though they still enjoy a bit more access than normal fans. With social media, many athletes don’t see the need for the press, Ryan said.

•  Ryan contends sportswriting is as good as ever, even though most readers receive their news now in digital form. Older people make the assumption the writing can’t be as good because it’s not in print, and Ryan said that’s just not the case.

Overall, Ryan said he has found the Internet an invaluable research tool for his writing. “It makes life a lot easier,” he said.

• Ryan shunned any New England bias when he answered that to him Joe Montana is the best quarterback of all time, not Tom Brady. In Montana’s 4-0 record in Super Bowls, he threw for 11 touchdowns and no interceptions, Ryan noted.

• The NSSA Hall of Fame includes six sportswriters from the Boston Globe. Goren asked Ryan what made that happen. Ryan said except for Bud Collins, who was of a different era, the other five Boston Globe writers, including himself, were hired by the same editor, Ernie Roberts. Roberts had an eye for writing talent.

Manning’s trying not to be the storyline going into the game, Ryan added, but if the Broncos win, Manning surely will call it quits.

• Ryan noted Boston has had nine sports championships since the turn of the new century, touching all four of the major professional sports. “It’s going to be a long time before anyone does that,” he said.

• Referring back to the Carolina Panthers, Ryan said the fan base should appreciate the Panthers now, because you never know what’s going to happen in the future.

“When you get a great team, savor the moment,” Ryan said. “Every year is different.”

Should town of Granite Quarry have a Facebook page?