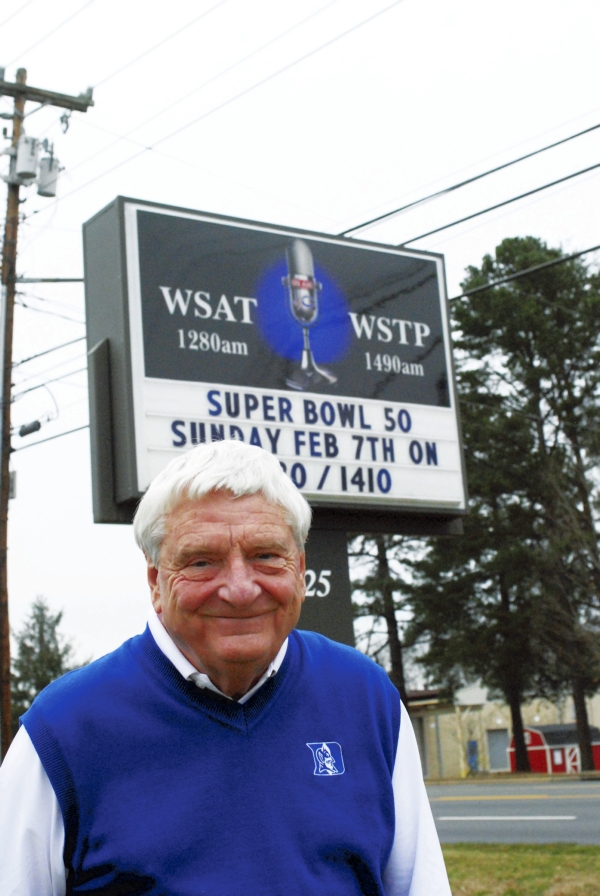 SALISBURY — When Buddy Poole purchased WSAT and moved back here in 2002, little did he know that he would end up at the Super Bowl.

Poole and his wife, Diane, are two of a handful of local folks who will be at Levi Stadium in Santa Clara, Calif., this Sunday, cheering on the Carolina Panthers in Super Bowl 50.

“Oh man, it’s on my  bucket list … I’ve always wanted to go,” Poole said recently about the NFL’s biggest game. “Really, it’s a dream come true for me, it really is.”

Due to WSAT 1280 being an affiliate on the Carolina Panthers’ broadcasting network, airing the games each week, Poole was able to purchase two tickets to Super Bowl 50. And while very expensive, it was an opportunity that Poole just couldn’t pass up.

The price was $1,250 per ticket, in the 300 level, or upper deck of Levi Stadium, usually the home of the San Francisco 49ers. “Yes, it’s upper lever … I guess we’ll be watching airplanes circle all day,” quipped Poole.

Poole said that he made the decision to go on Jan. 25, the day after Carolina defeated Arizona in the NFC Championship game. Buddy and Diane were at that game as well.

As soon as the tickets were secured, Diane got on line and found hotel room at Country Inn and Suites, roughly three miles from the stadium. Poole says the room is $375 per night, but that was well below some other hotels they looked into, ranging between $500 and $700 a night.

Poole said that the airline flights were inflated as well.

“We fly out at 6 a.m. Thursday and return next Monday,” said Poole. “They jacked the price of the flights too, a lot more than normal. And we paid more for the direct flight home, too, because the lower-priced ones had so many stops coming back, it would have take 15 hours.”

The flight out has an hour layover in Houston, making the trip about eight hours. The Pooles will fly into San Jose, instead of San Francisco. The Super Bowl is not in San Francisco, as some may think. Levi Stadium is actually in Santa Clara, 45 miles from the city by the bay.

The Pooles definitely plan to visit San Francisco. “We rented a car, so we’ll drive up to San Francisco for a day and hopefully get some pictures,” said Buddy. “I’ve never been there, only landed there once on the way to Hawaii … so I’ve never seen the city.”

Poole, a Rowan County native, has been in radio for most of his life, in the U.S. Army, in Durham, Burlington, High Point, Thomasville and finally, Salisbury.

His love affair with the Panthers began in 2004, two years after he took over the radio station and a year after the team’s first Super Bowl appearance.

Interestingly enough, it was some WSAT listeners that requested that the station look into airing the Panthers’ games. At that time, only WBT-AM in Charlotte broadcast the games in this area, and the reception wasn’t all that good, especially during the daytime.

“One person that called in was Jerry Johnson, who said, ‘Buddy, we can’t get the Panthers on the radio,'” remembers Poole. “About an hour later on that same day, which was a Monday, a lady called and said the same thing.”

Those calls got Poole to thinking. It was August and the Panthers were playing Cleveland in a pre-season game that Friday night. Poole was broadcasting a high school game between South Rowan and Kannapolis that same evening.

“So after my game was over, I thought I would tune into the Panthers game in my car, since I was 10 miles closer to Charlotte, but surprisingly, there was a lot of  static on WBT,” recalls Poole. “And I went up and down the dial, but couldn’t find the game. I thought to myself, ‘this is ridiculous.'”

The following Monday, Poole called the Panthers’ affiliates director and left him a voice mail. He took him several days to get back to Poole because he actually drove up towards Salisbury, to check WBT’s signal.

“He did call me back and said that he had checked things out and they’d love to have WSAT as an affiliate,” continued Poole. “We signed up and started carrying the games a week later. They couldn’t believe that we sold out the local ad spots in no time, because some of their big FM affiliates were having trouble selling out their spots.”

The next season, a Panthers’ staffer and radio play-by-play announcer Mick Mixson came to Salisbury and treated Buddy and his son, Lance, to lunch.  They also asked a favor — would Buddy come to Charlotte and speak at the affiliates meeting on how to sell the Panthers on local radio?

“Well, that just sort of solidified our relationship with the Panthers and we’ve had good things every since,” said Buddy. “I love the Panthers!”

So Buddy and Diane are going to Super Bowl 50.

“This is kind of my summer vacation come early,” he said. “I’ll have to save up to pay it off, but it was just too big of an opportunity not to take. Diane is real excited about it and she and I love doing things together. Some friends said, ‘we know it’s on your bucket list … you need to go!'”

Poole is still the station’s general manager, morning show host and voice on Catawba football and basketball broadcasts. So Poole’s employers will be glad to know that Buddy’s trip is not all fun and games.

“It’s a little work-related,” Poole said with a wink. “I’ll be doing some reports once I get out there. Probably on Friday and Saturday, I’ll shoot some stuff back here.”