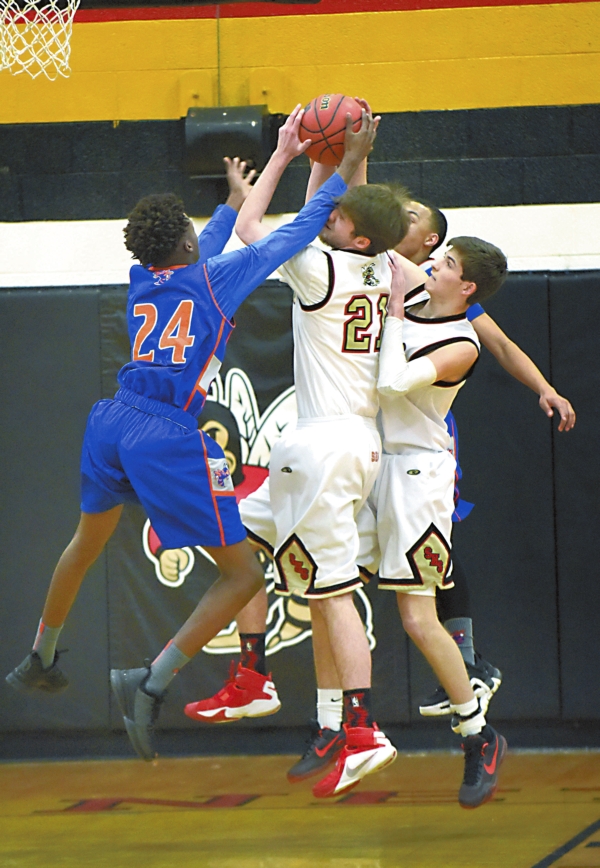 Wayne Hinshaw/for the Salisbury Post ... Salisbury’s Wes Fazia (21) and Will Leckonby, right, battle for a rebound against Lexington’s Marquise Jordan (24), last night at Salisbury. The Hornets won the game, 90-77.

SALISBURY — At the beginning of the season, coach Bryan Withers thought he had a pretty good boys basketball team at Salisbury.

“There’s a whole lot we can still work on,” he said Tuesday night, just moments after the Hornets outscored visiting Lexington, 90-77, and clinched second place in the CCC. “But the pieces are there, man. I’m starting to see some really good stuff.”

There was much to admire in this one. Salisbury (17-3, 6-1) shot 60 percent from the field, buried eight 3-pointers and never trailed, completing a season sweep against the high-octane Yellow Jackets (12-8, 3-4). It needed less than two minutes to build a 9-0 lead that eventually mushroomed to 66-46, early in the fourth quarter, before Lexington staged a final charge up the hill.

“We really wanted to come out strong tonight,” senior Wes Fazia said after shooting 7-for-9 from the floor and netting a team-best 18 points. “Last time against them (Jan. 8) we went down and had to come back. We didn’t want to get into that kind of hole.”

Not to worry. Teammate Will Leckonby (also 18 points) made a pair of 3-balls in the opening period and 6-foot-5 junior Tre Oats was the hub of Salisbury’s inside/outside attack. When Jaquan Davis drove for an over-and-under layup, got fouled and hit the ensuing free throw, the Hornets were up, 24-11, late in the quarter.

“At their place, we weren’t energized right away,” Oats said after contributing 12 points and four blocked shots. “We made it a point to change that whole tone. We knew what to expect. We just had to match their energy and keep working the ball inside.”

It worked both ways. Oats went 6-for-8 from the doorstep and D.J. Alexander was 4-for-6 and snagged seven rebounds. But Leckonby was a pure sharpshooter from long distance, draining five of seven three-point attempts.

“He is starting to shoot the ball with a lot of confidence,” Withers said. “What’s making it all work is people are getting the ball inside at the right time.”

That was evident in the fourth quarter, when Salisbury turned the ball over 11 times and Lexington made things interesting. The visitors drew within 74-64 when junior Adrian Craven (game-high 22 points) threaded a three from the top of the key with 3:26 to play. Salisbury answered seconds later when Alex Yang connected on a 20-footer from left side.

“There are times when Alex is the glue of this team,” Withers said. “He doesn’t wow you with what he does. But he always makes the smart play.”

Salisbury kept Lexington are arm’s length by converting 11 of 14 free throws in the last four minutes. The outcome was all but secured when Oats took a well-placed bounce pass from Yang and made a layup that provided an 85-70 edge with 1:12 remaining. It helped produce an off-the-script victory for the Hornets, who routinely fall behind and rally late for dramatic wins.

“We have the ability to start off strong and hold teams off,” said Oats. “It’s good to know we’re able to do this.”