Fire leaves five and their pets without a home 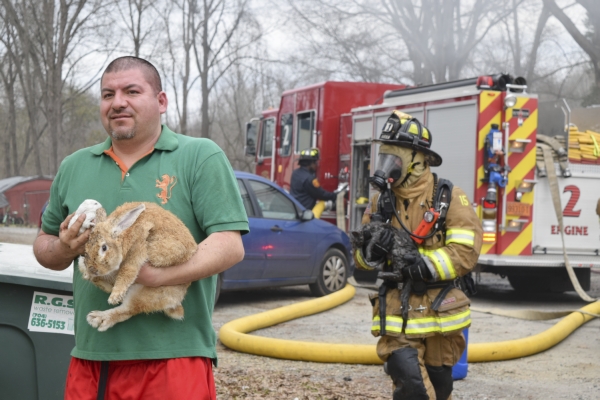 One of the residents carries two rabbits that firefighters rescued from the house. In back, a firefighter carries a bedraggled cat.

A fire in a home on Kristy Lane has left five people and several pets without shelter.

The fire, at 150 Kristy Lane, forced a couple out of their home Tuesday afternoon.

Salisbury and Granite Quarry fire departments received the call at 1:53 p.m. and responded to the fire. The couple appeared to be home alone at the time of the fire, but fire officials said they could not confirm due to a language barrier. The couple spoke Spanish, and no one with the fire departments could translate.

Heather Lemaster with the Red Cross spoke with the couple, who said they had three children. All were at school when the fire occurred. Their bus was due to arrive at 3 p.m.

Chris Kepley, Salisbury Fire Department’s public information officer, said firefighters rescued a cat and a “bundle of rabbits” from the home. When firefighters arrived, the home was heavily involved. Kepley said the home was a “total loss.”

Carolina Vega, a passerby who stopped to help the couple translate, said they also had three dogs. One was found outside the home, but the other two had not been found Tuesday afternoon. Kepley says they’ll know if the dogs stayed inside the home when investigators arrive.

The cause of the fire is currently unknown.

The Red Cross responded to see if the family was in need of shelter. Lemaster said the couple will need to find a place to shelter the animals until they’re able to find a new residence.