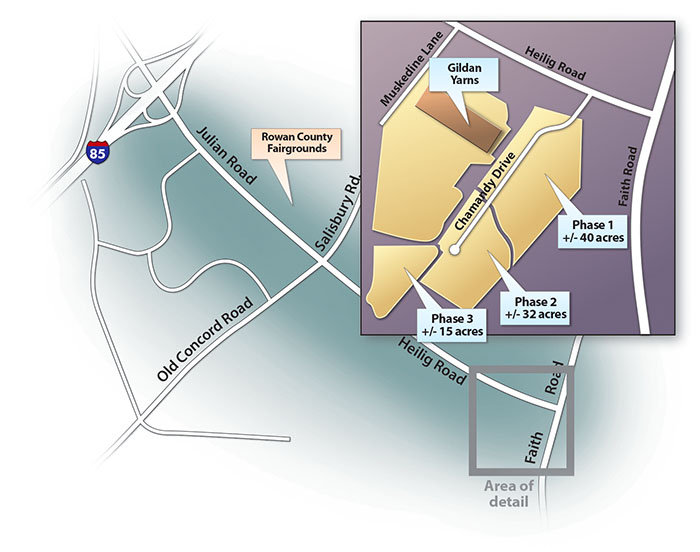 By Josh Bergeron and Mark Wineka

GRANITE QUARRY — Town leaders and county commissioners on Monday both approved their parts of a deal that Rowan Works Economic Development Director Robert Van Geons called one of the most significant in decades.

Both groups approved incentive deals for speculative buildings in a new industrial park off of Heilig Road. As part of both deals, Easter Creek Partners, based in Davidson County, would purchase a 35-acre tract of land and build two speculative buildings — one at 100,000 square feet and another at 150,000 square feet. Construction is estimated to begin this spring. Both buildings, valued at nearly $14 million, could be complete by early 2017.

For its part, the Granite Quarry Board of Alderman approved an incentive package worth $52,500 per year and agreed to provide free water and sewer connections for Phase I of the project. As owners of the industrial park, Rowan County approved a wide-ranging deal that would require Easter Creek Partners clear and grade the entire park, including land the company doesn’t initially purchase. It would also reduce the purchase price to zero if certain conditions are met and provide tax incentives if buildings are empty when the first tax payments are due.

County commissioners would also give Easter Creek Partners the ability to purchase remaining tracts of land in the park at a reduced price.

Despite the potential for economic development, not all commissioners were happy with Monday’s deal, which passed by a 4-1 vote. The vote came after Rowan County and Granite Quarry held a joint public hearing. No members of the public spoke during the public hearing. County Commissioner Craig Pierce was the lone “no” vote. He questioned whether state statutes make commissioners’ deal illegal.

Nearly 70 years ago, Rowan County initially took ownership of the land containing Granite Quarry’s industrial park, according to the property deed. Van Geons said parts of the land have been chopped off for other projects, such as Gildan. Before the newest group of commissioners were elected, the county allowed Granite Quarry to annex the land. Until county officials secured a grant to pay for an access road on the property, however, it was simply a wooded area. During Monday’s meeting, county leaders explained numerous benefits associated with the speculative buildings deal.

“Everyone involved around economic development believes this is a worthwhile project,” Van Geons said during Monday’s meeting. “It’s actually the type of project that we had hoped to work our way towards. These buildings will expand the tax base … The land is vacant and has sat vacant for many years.”

If the company decides to purchase more land in the park, county officials would give Easter Creek Partners credit for its grading work and a reduced price.

With no businesses guaranteed to locate in the industrial park, Pierce said North Carolina General Statue 158-7.1 makes the deal illegal. The specific part cited by Pierce, among other things, requires a governing body determine average salaries of employees that would work at an incoming business.

“After a long conversation with the county attorney, he’s kind of assured me this is a gray area,” Pierce said about the deal during Monday’s meeting. “As long as no citizen of Rowan County puts out an injunction to have this examined by a judge, it will go through.”

When asked after the meeting how he would have drafted the deal, Pierce said “there was nothing there to rewrite.” He compared Monday’s deal to commissioners giving a company a blank piece of paper and agreeing to everything that was written down.

Edds and Van Geons extensively talked about the deal’s benefits during the meeting. And, afterward, Edds and Van Geons attempted to refute any claim that the deal doesn’t follow state law. Van Geons said his economic development agency hired an attorney — not County Attorney Jay Dees — specifically to review the speculative buildings deal. Van Geons said the deal approved Monday was based on several others across the state.

“The time for being timid is over,” Edds said after the meeting. “We will be aggressive in every phase of economic development, period.”

Pierce said he didn’t have an issue with Granite Quarry’s deal. The town isn’t conveying any land to bring the speculative buildings to town. Granite Quarry is only providing incentives and free water and sewer hookups.

The Granite Quarry Board of Aldermen passed its end of the incentives deal, or investment grant, at the the board’s regularly scheduled meeting Monday night.

The board unanimously approved the investment grant, valued at $52,500 a year, and the water and sewer taps.

The town also is installing a waterline down the new Chamandy Drive to serve the industrial park and a proposed residential development tht will be built off Faith Road. Town Engineer Jeff Moody said that project is “going very well,” and he judged 69 percent of the pipe has been installed, putting things ahead of schedule.

“It looks like you’re going to be fine,” Moody told aldermen.

The Granite Quarry board approved a partial payment on the waterline Monday night of $132,319.

Smith seeks seat on KCS board