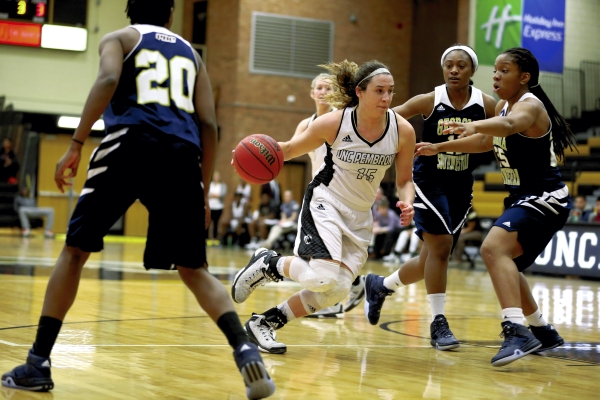 Freshman Avery Locklear is destined to become one of the most popular players in UNC Pembroke women’s basketball history.
“When I was introduced for the first time at home at our Midnight Madness, the sound level meter in the gym did go up a little bit,” Locklear said with a laugh. “I guess I’ve got a lot of cousins here who had never seen me play.”
UNC Pembroke is a historically American Indian university, so the former South Rowan star’s heritage made her something of a celebrity almost from the moment she signed with the Division II school. Locklear’s grandfather (Delton Ray Locklear) and uncle (Kelvin Sampson) are two of UNCP’s athletic legends.
Lots of little girls in Robeson County have found themselves a new role model this basketball season, and Locklear is aware of it. She’s active in a sorority and in student government, but she also found the time to make all A’s in her first college semester. For the history major, it’s as important to be a role model in the classroom as it is to dive on the floor for loose basketballs.
Basketball success at South Rowan came quickly for Locklear. She started opening night as a varsity freshman, scored 13 points to lead a win, and never looked back.
She averaged a school-record 18.7 points per game in her 96 outings for coach Jarrod Smith. She missed seven games with an injury to her right hand during her junior year, but she still finished her career with a school-record 1,795 points and two Rowan County Player of the Year accolades.
Becoming a star at the college level will take longer. Locklear was more skilled and stronger than her opponents in high school, but just about everyone she faces now was the best player on their high school team. Locklear is only 5-foot-7, small for a two-guard, and she’s giving up quickness to most of the rangy athletes defending her.
Her biggest physical adjustment has been learning a quicker release on her jump shot. The easy drives to the basket for three-point plays aren’t there for her now, and a high percentage of her field-goal attempts are 3-point tries.
“It’s a learning experience, but it’s all been great, and I’m having a blast playing college basketball,” Locklear said in a phone interview. “You do have to put a lot of time in and practices are a lot longer and harder than they were in high school. Then there’s the travel. There are no close away games for us. It seems like we’re going to Georgia every week.”
UNC Pembroke is the only North Carolina school in the Peach Belt Conference, so every road game is an adventure. Most of the trips are to Georgia, although the Braves traveled to Florida on Saturday for a two-point loss to Flagler.
Locklear quickly made an impression on her coaches and teammates when UNC Pembroke opened the season with exhibitions against D-I opponents Campbell and UNC Wilmington. She scored in double figures in both games.
“My older teammates have been great to me from the start, always calling and asking me to do things with them,” Locklear said. “That’s been one of the best things. It’s always cool to fit in as part of a team and to have close bonds with teammates.”
While Locklear came off the bench in the exhibitions, she’s been a starter since UNC Pembroke’s official opening night. That was a home game against Fayetteville State.
“I had butterflies before that first game at home,” Locklear said. “A lot of my peers only knew me from going to class with me, and they were seeing me play ball for the first time. It helped that I played against (former Salisbury star) Doreen Richardson that night. I didn’t really know her, but I’d heard a lot about her and I knew she was from the same county as me.”
Locklear didn’t play nervous. She shot 6-for-12, made four 3-pointers and scored 16 points.
She’s been a victim of the inevitable ups and downs all young players experience. There was a bad stretch where nothing would fall for her, although she’s bounced back from it.
“I did have a rough patch,” she said. “Part of it was just adjusting to the style of play. In high school, I’d get a defensive rebound and I’d look to go all the way. Now if I get a defensive rebound, I look for our point guard. I’m playing the ‘2’ exclusively now, which is different for me than high school and AAU ball where I had the ball in my hands a lot.”
Part of her struggle in late December and early January was the general grind. It takes time to get used to a college schedule.
“I’m diving on the floor a lot, I get banged up, and I’ve had to learn how to keep my body healthy enough to play,” Locklear said. “You stay so busy, but you have to find time for those ice baths.”
Locklear is averaging 9.1 points and 3.1 rebounds and leads the Braves in minutes played. While her shooting percentages (32.3 percent on field goals, 29.8 percent on 3-pointers) still aren’t where she wants them to be, they’re trending in the right direction.
She’s been strong in UNC Pembroke’s last four games — scoring 17, 13, 17 and 10 points. She shot 40 percent in those four games and made 10 3-pointers. It’s been the best run of her rookie season, and she’s determined to sustain it. The Braves (8-11) need her to. They’re 7-3 at home but 1-8 on the road.
“I took two charges in the game with Georgia Southwestern (on Jan. 23), and I was excited about that,” Locklear said. “Lately I’ve played more like I know how to play and how I can play.”