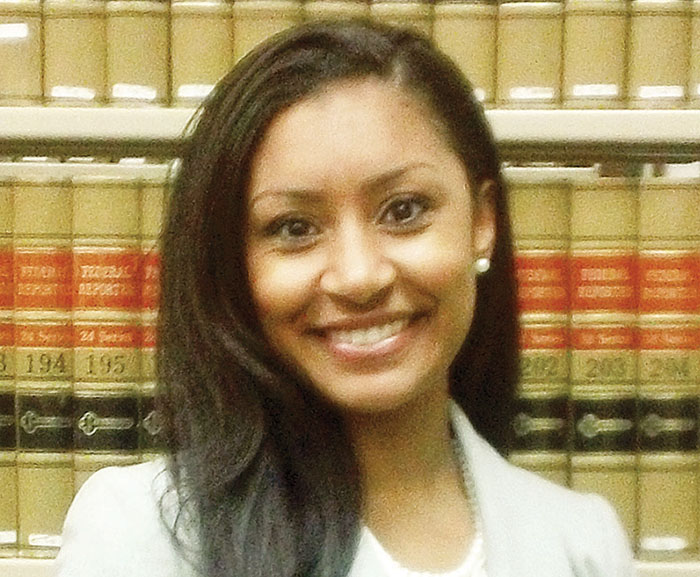 Between the ages of 9 and 14, Simone R. Martin must have done her Rosa Parks monologue about 100 times.

She always began, “I’m Rosa Parks and this, well, this is my story.” Her presentation on Parks, arguably the mother of the civil rights movement, lasted maybe 10 minutes, when you included the song in the middle. Martin delivered it in several states, depending on the requests that came in.

When Simone was 10, she performed the monologue with Rosa Parks herself in the Charlotte audience. Afterward, Parks spent considerable time talking with the bespectacled little girl.

Knowing and telling the Rosa Parks story — how in 1955 in Montgomery, Ala., Parks refused to surrender her city bus seat to a white passenger and the galvanizing effect it would have on the civil rights movement — left a lasting impression on Martin.

Today as a young attorney in Columbia, S.C., Martin already is finding herself involved in some high-profile civil rights cases.

Martin has been part of the representation for Levar Jones, a man shot at a gas station by a S.C. state trooper; Feidin Santana, who filmed the fatal shooting of South Carolinian Walter Scott; Bree Newsome, the woman who removed the Confederate flag from the S.C. Statehouse grounds; and two students connected to the recent incident at Spring Valley High School, where a school resources officer was filmed throwing a student across a classroom floor.

“I enjoy being able to assist in these situations and being encouraging to others,” Martin said in a telephone interview last week. “I’m glad that I can do the job and that God has put me where he put me.”

Martin doesn’t downplay Parks’ role in all of this. Martin always found her story inspiring, and “it has taught me,” she said, “the importance of demonstrating strength, poise and conviction simultaneously and how you’re capable of overcoming obstacles if you keep God first.”

Martin, 29, grew up in Rowan County, attending North Hills Christian School before becoming a standout student at West Rowan High, where she graduated in 2004. She is the daughter of  Carl and Saundra Roberson Martin and the granddaughter of Marion Hall Roberson.

Her maternal grandfather, the late Charles Roberson, was a trailblazing African-American Realtor in this area.

She is part of the planning, for example, for the 100th anniversary of her home church, New Hope AME Zion.

After high school, Martin went on to major in journalism at the University of North Carolina at Chapel Hill, where she also minored in chemistry, thinking at one point she might be interested in medical school.

“I decided to have a fallback plan,” she said, but a tough class in Organic Chemistry II dissuaded her from the science path, and she concentrated on communications.

“I felt you could never go wrong and you could work in any capacity if you communicate well,” Martin said.

As a UNC undergraduate, Martin stayed busy. She reported for “Carolina Week,” a student-run newcast. She worked for the UNC football office as a Carolina Blue and also had a summer internship in New York with Black Entertainment Television.

Meanwhile, she continued to sing. A self-described social butterfly, Martin said, “I was trying to be Miss Everything on campus.”

She became a featured soloist for an a cappella group and said she became known as someone who sang well and loved to perform. The student organization for homecoming asked if she would sing some songs in advance of John Legend’s concert in Chapel Hill.

Martin went on to earn her master’s degree in English at N.C. Central University in Durham. At NCCU, she became a NC-ACTS Community Service Scholar, requiring the completion of 300 hours of community service.

She said she also founded an organization that tried to give students at NCCU more community-service-oriented choices for spring break trips.

“I’ve never been shy,” Martin said. “… My mom and dad have always told me to never be afraid. Stand tall.”

During the summer of 2010, Martin briefly taught English at Livingstone College while facing a personal decision — should she pursue a Ph.D. or go to law school?

She began her studies at the University of South Carolina Law School in the fall of 2010, graduating in 2013. Maybe it went back to her monologue performance as a child, but Martin won the 2011 and 2012 Moot Court Competitions at USC.

Martin also held an executive office with the National Black Law Students Association and studied transnational dispute resolution for several weeks at the Honourable Society of Gray’s Inn in London.

Outside the classroom, Martin clerked for Justice Donald W. Beatty of the S.C. Supreme Court, with the U.S. Attorney’s Office for the District of South Carolina, with the chief legal counsel for S.C. Gov. Nikki Haley and for J. Todd Rutherford, the minority leader in the S.C. House of Representatives.

After passing the S.C. Bar., Martin held a judicial clerkship under Judge Clifton Newman of the S.C. Circuit Court. She then joined Rutherford’s law firm in Columbia, where she is today.

Martin said she spends most of her time in trial court, handling criminal defense, personal injury and municipal government cases, most of which stem from civil rights abuses.

Because of the nature of her cases, Martin has appeared with clients on “The Nancy Grace Show,” “CNN with Don Lemon,” The D.L. Hughley Show” and local S.C. news stations. She also has seen herself quoted in “The New Yorker” and on Politico.com.

Martin isn’t sure what her future holds or what she wants her ultimate legacy to be. “I can’t say I’m fully satisfied,” she said. “… I always strive for more.”

For now, Martin said, she is  “letting the Lord order my steps.”

As a side note, Martin doesn’t want to give up on singing and is back taking voice lessons after some time off from performing.  “I just want to make sure my gift is not lost,” she said.

On occasion, some group will still ask her to sing the national anthem or some other songs. “I love to sing,” she said. “I’ll sing anything.”

Martin also was surprised a couple of years back when one of her law school professors had heard about her Rosa Parks monologue as a child and asked her to recite it again at USC’s Dr. Martin Luther King Jr. celebration.

Martin still knows most every word.

“I don’t think I’m as cute doing it anymore,” she said.