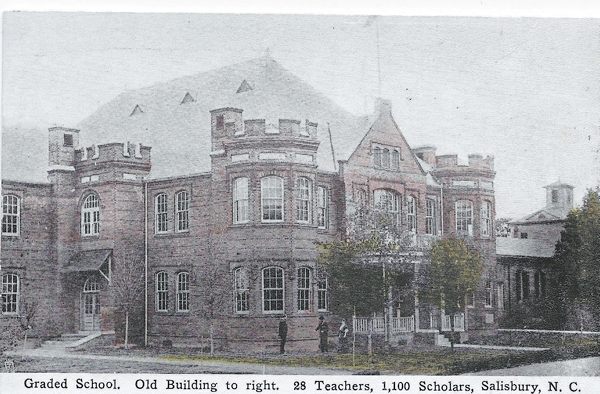 The Graded School on Ellis Street was renamed for Frank B. John after his death. (Photo postcard by Theo Buerbaum, from the collection of Susan Sides)

Sharing history: Who was Frank B. John? Frank B. John was principal of Boyden High School in 1927 when he was found dead at the age of 28.

Salisbury school bore his name, but few know who he was

Many in our community attended the Frank B. John School, yet few know the story of who he was or why the Ellis Street Graded School was renamed for him. A little bit of the history of the school will show the feelings and pride of the community for our educational system.

Years were spent raising the funds for construction of this school. The cornerstone was laid Oct. 15, 1880. A most eloquent address was presented by James M. Gray, Esquire, on this occasion. Gray stated:

“Men may disagree in the matters of religion and politics — in fact, on almost every topic, but there is one subject upon which all agree — no man disputes the fact that the labor of the school teacher benefits humanity, and is the blessing of heaven to every child.”

He continued with these remarks: “I may with propriety here say to the Mayor, the Board of Commissioners, and all other active benevolent citizens of Salisbury, you are doing a noble work, and the children educated here will arise and call you blessed forevermore.”

The Carolina Watchman reports Sept. 1, 1881, “This school opened ten days since, in the new school building, has started under most flattering circumstances with a hundred and fifty pupils in daily attendance.” One early promotional brochure for the city of Salisbury states that “the first brick public school building in the State of North Carolina was erected in Salisbury,” and that building was the Ellis Street Graded School.

In 1918, Frank B. John came to Salisbury from Laurinburg. He graduated from the University of North Carolina in 1918 and was a member of the Phi Beta Kappa scholastic fraternity. He began as a teacher at Boyden High School and soon became principal. During his time here, he immersed himself in the community. He was a member of the Fulton Masonic Lodge and was a York Rite Shriner with membership in the local Royal Arch Illustrious Council. He was also a member of the Knights of Pythias. He served as Chairman of the Board of Directors of the Civitan Club.

In his religious beliefs, he belonged to the First Methodist Church where he taught a boys’ class in Sunday School. He also was continuing his own education during the summers at Columbia University in New York where he worked toward a Ph.D. degree.

Not at his desk

The morning of Oct. 12, 1927, he was not at his desk at 8:30 as was his routine. A call was placed to the home of Mr. W. C. Maupin of South Fulton Street where Mr. John lodged. His room door was locked but two teachers of the high school crawled in from a window opening out on the porch roof. They discovered the body of Mr. John in a bathtub partially filled with water. Nothing in the room appeared to be out of order. Even a soap dish on the side of the tub was undisturbed. Early conjecture was that he had suffered a heart attack at the age of 28.

Dr. C. W. Armstrong, acting coroner in the absence of T. W. Summersett who was out of town, and Dr. F. B. Spencer examined the body immediately after being found, and they thought that death was caused by heart failure.

The community was both shocked and saddened at the sudden loss of this young man who they entrusted with the education of their children.

Col. A. H. Boyden, Chairman of the city school board, paid high tribute to Mr. John saying that the sudden death of the young man was a severe shock to him personally, that he regarded him as one of the finest types of men, and that he knew of no man who has come to Salisbury during these years who was more beloved and more serviceable than the late principal of the Boyden High School.

John’s body was taken to Laurinburg for burial following services here in the Methodist church. A large delegation of friends including members of the city school board, members of the faculty of the city schools, high school pupils, Masons, Knights of Pythias, Civitan Club members, and others, left Salisbury in one of the largest groups ever to leave at one time for an out of town funeral.

An autopsy, under the direction of Dr. C. W. Armstrong and attended by a number of local physicians, was held but failed to show the cause of death. John’s organs were sent to Baltimore for a more detailed examination.

At its next meeting, the Civitan Club paid tribute to Mr. John. A brief history of his life and words of appreciation were given by J. Allan Dunn, a close personal friend. Resolutions of respect were adopted by the club, deploring the death of the member, the first time in the history of the club that such an event had happened. The Club unanimously endorsed proposing the change of the name of the Ellis Street School to the Frank B. John school. A silent standing tribute closed the memorial program.

Tributes were paid to the late principal at services at Boyden High School the morning of Oct. 21, 1927. No school classes were held. The students of the high school and members of the community were in attendance. Superintendent Phillips presided. Many students participated in the service. James Krider served as spokesman for the Senior class, Miss Clellie Lucas for the Juniors, Webster Collet for the Sophomores, and Archibald Rufty for the Freshmen. Arnold Snider spoke for the Hi-Y, Miss Helen Tyree for the Girls Reserves, Preston Frederick for the athletic association, Miss Ellen Daniel for the Girls council, Harry Gwinn for the publication staff, William Shoaf for the student body. Miss Avis Little read a sonnet of her own creation and Charles Kluttz spoke on behalf of Mr. John’s Sunday School class.

The Kiwanis Club unanimously recommended to the Board of Education that the name of the Ellis Street Graded School be changed to the Frank B. John School. Several members spoke of the influence John had among the students and that resolutions had been drawn up by a committee consisting of L. H. Clement, H. P. Brandis, J. W. Payne, and J. O. Craig. The resolutions in part read “Now, therefore, be it resolved that in recognition of his untiring efforts in the promotion of education, of his discipline in conduct, of the uplift and good influences he had upon the instructors and students under him, of his pleasing patient and painstaking modeling of good citizenship and the up-building of Christian character, the Kiwanis Club of Salisbury NC makes public its appreciation of the services rendered to this community and to this end endorses the proposal to rename in his memory the Ellis Street School, where he taught for many years, and requests the Board of Education to change the aforesaid school to the Frank B. John school.”

Oct. 25, 1927, the Salisbury school board renamed the Ellis Street Graded School to the Frank B. John School. For seven of the nine years he was in Salisbury, Mr. John was teacher and principal at the Ellis Street high school. The school remained Frank B. John until Overton Elementary School was built in 1965. The center portion of the building was torn down, and the remaining structures are used now as school administrative offices.

And finally, the results of the tests conducted in Baltimore were received here by Dr. C. W. Armstrong. Frank Bell John had died by accident from carbon monoxide poisoning caused by a gas heater in the bathroom of the home where he roomed.

“In this connection, I desire to point out to the citizens of Salisbury the very grave danger of having gas or oil heaters in an insufficiently ventilated bathroom. This gas which they generate is very insidious, odorless, and deadly in its action and is always generated where these burners are in operation. If there is insufficient ventilation in a room, death may be the result. There are probably hundreds of them in operation in the city and it is my intention to ask the city council to cause an inspection to be made of all premises where these heaters are in operation and to pass suitable regulations governing their installation and operation. I desire to make it perfectly clear to everyone that Mr. John’s death was entirely accidental and that no blame or censure should in any way be placed upon any one. The heater which caused his death has been in use for a number of years and no one had any idea that there was any possibility of accident from its continued use.”

Susan Sides of Salisbury is an author, a collector of historic postcards and president of Historic Salisbury Foundation.

Neighborhoods fight uphill battle in city If Salisbury is truly the “Paris of the Piedmont”, then I am obviously living... read more