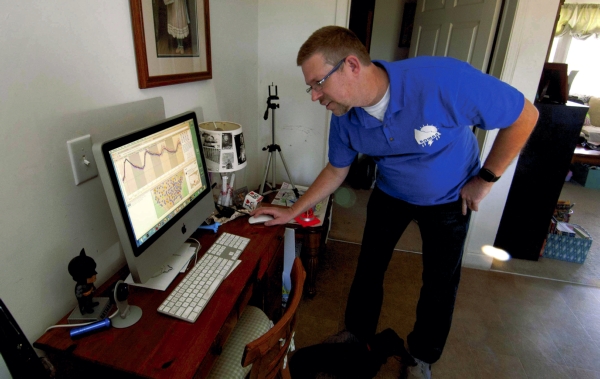 JON C. LAKEY / SALISBURY POST Weather forecaster Steve Monday constantly checks his devices of updates and relays them through his web pages. Monday has grown many followers on the social media platforms of Facebook and Twitter. His daily post and updates have kept many in Rowan County aware of the whats coming to the county in regards to weather. Friday, January 29, 2016, in , N.C.

ATWELL TOWNSHIP — Steve Monday isn’t sure when it started, this passion he has for weather.

He just knows that as a child he loved standing near a window with his grandfather as they watched storms gather in the sky together. He was intrigued even then with how the storm formed and why.

Monday sought out books and read about weather as a youngster. He learned to identify cloud formations and retained a lot of the basic stuff his middle school and high school science classes offered about meteorology.

When the Internet arrived, the amount of online technology and information available to him seemed to explode, but Monday’s career path took him in another direction, away from studying meteorology in college.

“Now that I’m older, I kind of regret I didn’t,” Monday says.

Monday commutes four days a week to his job at Belk corporate offices in Charlotte. Before that he worked for Bass Pro Shops at Concord Mills. At home, the 40-year-old Monday is devoted to his wife, Amy, and their 7-year-old daughter, Samantha.

Monday remains dedicated to something else — the weather, more specifically, Rowan County weather.

The breakfast nook at his home in southwestern Rowan County is Monday’s unassuming Weather Central, if you will. He spends considerable time on his laptop on the breakfast room table, or he’s checking a larger computer monitor on a desk along the wall that provides him important weather models.

When he’s away from those screens, Monday constantly scans his iPad. Its screen is cracked, and the case is frayed from overuse.

In Monday’s backyard, past the kitchen’s sliding doors, stand two small weather stations he depends on for information. One includes a camera that gives him eight-hour time-lapse video of the expansive sky he often looks on, much like he used to do in Davidson County with his grandfather.

A 1993 graduate of North Davidson High, Monday calls his one-man enterprise Rowan County Weather and labels himself as its chief forecaster. He moved to Rowan County about 10 years ago.

Monday’s Rowan County Weather website includes time and temperature from his home, which is about four miles from the Iredell County border; hourly forecasts; readings in humidity, barometric pressure and ultraviolet status; and the time-lapse looks at the skies around him.

When Rowan was hit recently with its first winter blast of snow and ice, Monday seemed to be giving current conditions and offering weather updates around the clock. He says he probably got about four hours sleep in a three-day period.

“Depending on what’s going on, it’s pretty hectic,” Monday says.

But a weather event such as the one Jan. 22-23 raises the profile of Rowan County Weather. Monday contributed a weather update to the Salisbury Post, and overall he noticed his Facebook likes increased by 1,200 people in the past two weeks.

Monday laughs that most of his followers on Twitter are probably students of Rowan-Salisbury Schools. Rowan County Weather gained a lot of traction with the kids in the winter of 2014-15, especially when he would Tweet something such as “Rita, it’s going to snow.”

He once picked up 1,000 Twitter followers over a day’s time, thanks to Tweets connected with schools and Rowan weather.

Monday serves as a weather spotter for WCNC in Charlotte and is part of station meteorologist Brad Panovich’s large network of spotters making up a First Warn Weather team. Monday also belongs to an even larger weather-spotting team for WFMY News 2 in Greensboro.

Monday says he started Rowan County Weather to provide county residents specific weather information that sometimes isn’t available because of Rowan’s location on the outer edge of the National Weather Service’s radar, based out of the Greenville-Spartanburg area of South Carolina.

Also, Charlotte’s NBC station has a 33-county coverage area, and when forecasts give one broad picture for the region, it’s easy to miss a specific forecast for Rowan, Monday says.

Several years ago, Monday earned his basic and advanced weather-spotting certificates in courses offered by the National Weather Service. He followed that up by taking online forecasting courses through the NWS.

Along the way, meteorologist Anthony Sturey of the NWS and Panovich in Charlotte became mentors of a sort. Sturey taught the NWS weather-spotting courses. It took time on the forecasting side, but Monday remembers eventually telling himself, “This is starting to click for me. I’m starting to get this.”

From his meteorologist friends, Monday learned a technique called “ensemble forecasting.” Everyone in the weather forecasting field knows about four big weather models, but Monday says inside those are algorithms of other models, meaning 53 different weather models are available.

“I look at every one of those on one screen,” Monday says. He goes through a process of eliminating weather models that have nothing to do with what’s going on outside and keeping the ones that fit what he sees with the current weather conditions.

“It’s a battle of attrition,” Monday says. “It’s not a perfect science, and it never will be, but they get us close.”

Monday is part of a co-op group connected to the National Weather Service that depends on daily information from him every day. He checks his rain gauge, records the high and low for a 24-hour period, reports whether it’s sunny, cloudy, rainy, foggy or whatever and sends that information to the co-op group. He is required to post it by 6:30 every morning.

Monday then looks at his weather models and gives his own Rowan County Weather forecast by 6:45 a.m.

When serious weather moves in, Monday tries to pinpoint his weather information for different parts of Rowan County, but he says there are certain questions from followers that can be difficult to answer, such as “Hey, I live at 645 Brown St. You think it’s going to hit here?” or “Do you think we’re going to have school tomorrow?”

Monday has made up a few shirts with Rowan County Weather logos on them. Thanks to his weather expertise, he has been asked to speak in many schools in the county, including his daughter’s class at Bostian Elementary.

Monday will tell you he’s not making any money on Rowan County Weather, and he remains hesitant about trying to earn revenue through advertisements on his website or Facebook page.

“I don’t want to cloud the news feed up,” he says.

But he wants Rowan County Weather to be a lasting enterprise, one that people come to depend on.

“I certainly want to continue to build this thing up,” he says.

During the most recent snow-and-sleet event in Rowan County, Monday was pretty close on the snow accumulation, but his prediction of at least a quarter-inch of ice never materialized — and that was OK with him.

Based on what he knows about Rowan County winters of the past, Monday thinks Rowan County definitely will see at least one more snow in February.

1. Teachers and principals in Rowan-Salisbury Schools are relying on a form of social media as a professional development tool.... read more