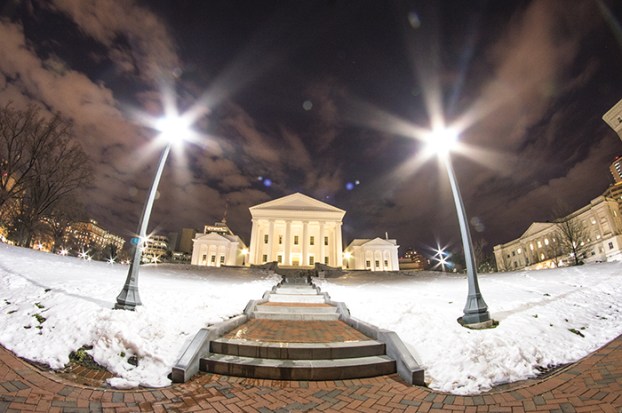 As the snow- and ice-covered scenery faded into my rear-view mirror, it seemed more like I was driving into the great, white north instead of traveling to cover one of Rowan County’s most prominent lawsuits.

Days earlier, much of the East Coast, including Rowan and the rural area of Virginia I was driving through, experienced a notable winter storm. Rowan received about four inches of winter precipitation. Judging by the remaining snow and ice adjacent to I-85, my current location in Virginia received significantly more. Winter precipitation was already mostly melted in Salisbury.

After a few hours of traveling through rural North Carolina and Virginia at interstate speeds, taller buildings began to sprout up along I-85. I was in Petersburg, a Salisbury-size city south of Richmond, Va., As I turned onto I-95, I passed more populous areas surrounding Richmond — the capital of Virginia.

The city of Richmond dwarfs Salisbury. Its metropolitan area, however, is about half the size of Salisbury. More important than its population — for the purposes of my trip anyway — was the U.S. Fourth Circuit Court of Appeals, located in downtown Richmond. The court was scheduled to hear Rowan County’s prayer lawsuit.

It’s actually the second time Rowan County’s name has popped up in the Fourth Circuit Court of Appeals. A case involving five North Carolina counties as plaintiffs and multiple mortgage agencies came to the court in 2013.

I stayed in a hotel near the courthouse, which was fairly easy to find. Navigating the streets, however, was not. At every turn, another monstrous pile of blackened ice and snow prevented cars from using the right turn lane. Along the roadside sat small walls of snow, which also made driving in the right lane difficult. I decided it would be better to walk everywhere after checking into the hotel. Walking, however, was equally as difficult. Using crosswalks required pedestrians to carefully walk around small hills of snow. The courthouse’s sidewalk, luckily, was mostly devoid of any remnants of the previous winter storm.

I arrived at the courthouse about 30 minutes before I needed to, which gave me time to explore its interior. It sits across from the Virginia State Capitol, and one of its more impressive features was the long, tall hallways leading to courtrooms. The courthouse, built in 1858, is listed on the National Register of Historic Places. Its original shape has been bolstered by various building additions. Once, however, it provided office space for Confederate President Jefferson Davis. Years later, Davis would be indicted for treason in the same building. He never actually stood trial for the charge.

Rowan’s prayer lawsuit would be the third of three cases heard in the courtroom that day. The first concerned the definition of the word embezzlement, which was fairly interesting. The second concerned a lengthy labor dispute — perhaps the least intriguing of the three.

After hearing the two prior cases without a break, judges called a recess before Rowan’s case. A few of those in the courtroom, college students who traveled to the court for a class, left for a break. Most, however, stayed put.

Judges reentered the courtroom within several minutes of taking the break, and oral arguments in Rowan’s prayer case began.

Sitting in the front row, it was hard to gauge how attendees reacted to statements in the oral arguments. A court hearing, however, is hardly as long or mundane as it might seem. During Wednesday’s hearing, attendees chuckled and reacted to the equal-opportunity interrogation by judges.

Immediately following the end to oral arguments, the small group of news reporters covering the trial exited the courthouse and waited for both sides to do the same. Both sides were fairly confident about the strength of arguments. The three-judge panel’s opinion is the only real one that matters for now.

It could be weeks or months before the judges issue a ruling. Some observers and participants in the case expect a ruling in the spring. The losing side could then ask all judges in the Fourth Circuit to hear the case. The Supreme Court could also be the next step in the case. Both, however, could refuse to hear the case.

For now most observers can only wait and wonder what a ruling might say.