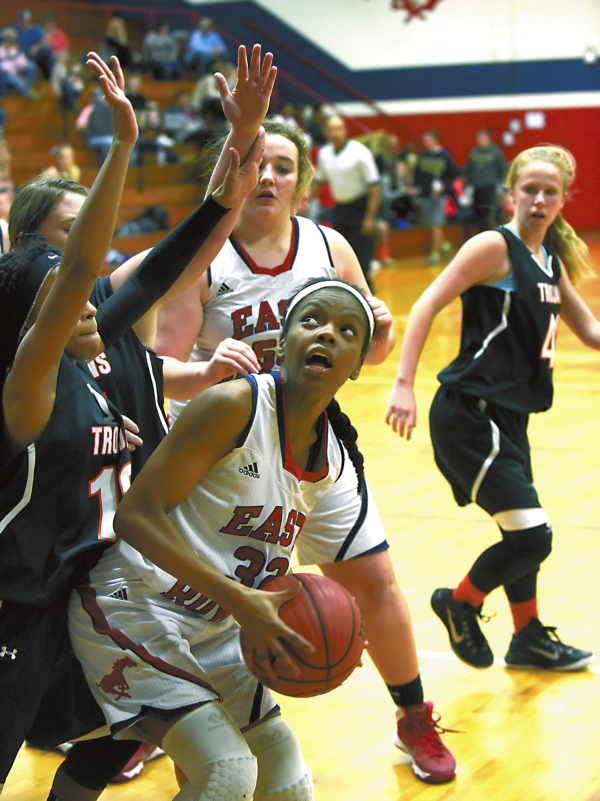 GRANITE QUARRY — Shenique Pharr scored 19 points on Friday and twin sister Shenell Pharr also had 19 in East Rowan’s easy 69-22 win against Northwest Cabarrus.
“Those two can really get out and run and they control the pace for East Rowan,” Northwest coach Jarmaine Spruill said. “I like the motor that those two run with and they seem to feed off each other.”
The Pharrs do feed off each other and they usually carry most of the scoring burden for East. But this was the first time since Jan. 5 that both seniors were in double figures in the same game. That’s one reason East (11-9, 6-8 SPC) hasn’t been able to get on a roll.
“It was good to see both of them on at the same time,” East coach Danielle Porter said. “I hope we can build on this.”
Northwest (0-17, 0-13 SPC) has had a tough season, and the Mustangs, coming off back-to-back losses, blew the Trojans out early. The Pharrs scored eight apiece in the first quarter as East stormed to a 22-5 lead with fastbreak buckets. Shenell got a three-point play by scoring acrobatically with her back to the hoop.
“We’ve worked on our transition game and on our pressure defense,” Shenique said. “We were finishing better tonight.”
Shenique had the better shooting game (7-for-10) of the twins and also had seven rebounds. Shenell had four steals.
Northwest didn’t make its first field goal until almost 11 minutes into the game.
East didn’t make a 3-pointer (0-for-7), but it didn’t need to. The Mustangs were getting a ton of layups and they led 40-11 at the break.
Brittany Small finished with eight points and 10 rebounds. Jocelyn Lowe had six points and five steals. Lauren Weisensel had seven rebounds. Courtney Wagner and Shelby Lowe scored six points each off the bench.
Ashleigh Thomson led Northwest with 12 points. She got most of them at the foul line where she shot 9-for-10. She also made the game’s lone 3-pointer.
“When she gets it going, she’s a good shooter,” Spruill said.
Porter didn’t get overly excited about East’s win because she’s seen the Mustangs roll before. But every time it looks like the Mustangs might be turning the corner, they’ve taken a step back. Their longest winning streak this season is three games. The longest losing streak is two games.
“Tonight was pretty typical of our season,” Porter said. “There’s been a lot of ebb and flow. When things are going well, everyone seems to play well. The challenge for us is to fight through the tough times and win games when things don’t go well. There’s still time for us to start doing that. We want to finish strong.”