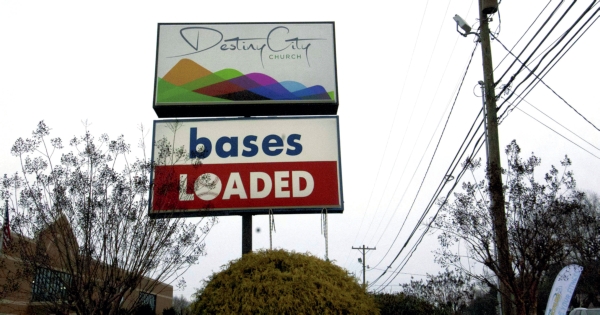 Pastor Don Vess and his congregation praise God for opening the window of opportunity for a home for his nomadic church.
Jon Lakey/Salisbury Post “The Lord had to do it to get us where we are. Our journey hasn’t been easy at all, but God is not limited by time and space,” said Pastor Don Vess of Destiny City Church.

After extensive renovation, the church now conducts services in the old Kidsports building just behind The Forum on South Main Street. Vess and his congregation have entered a lease/purchase plan to acquire the facility.

The church first began meeting in the NAPA store in Rockwell in May 2010, sharing the Hillcreek Worship Center. Destiny members but quickly decided that they wanted a place of their own.

Destiny City met at The Inn for a year and a half. A timely call came from Livingstone College, offering Destiny City a choice of four locations on campus. Vess and his church members were soon meeting in the Harriet Tubman Theatre, capable of seating 300-400 attendees. Vess said, “That was a larger facility than we needed and we eventually moved to the Student Chapel, a smaller and more intimate venue with handicapped access.”

The Livingstone experience was good for the congregation according to Vess. He said, “Our people were faithful and they grew in their worship. We learned about the African American culture and we loved the students and staff. It was a great experience that tore down many prejudices.”

The church needed more visibility. Church fellowship at Livingstone included several hours of preparation each week that included posting directional signs in the area. Destiny City yearned to continue moving forward and thought they had a solution when the congregation acquired the old Foursquare Church building in Salisbury.

The Foursquare building needed to be remodeled to meet building codes and another separate building on the property had its own issues. Parking was very limited and couldn’t easily be expanded. Vess said, “I went over to that church building and walked around it as many as seven times a day while praying.  I asked God for more, but what we need. I knew to trust God because He is able.”

Pastor Vess had attended an Evangelic Fellowship conference in 2014. Near the end of the conference, Vess met Jim Reilly, known for his gift of prophecy. Vess said, “I started to tell him about us and he cut me off. Reilly knew that we had been in a difficult time and told me that God knew all the details so he didn’t need more of an explanation. Reilly was sure that God had positioned us in Salisbury and that a breakthrough was coming. It’s going to be good!”

Realizing that the Foursquare building was an unaffordable and still limiting solution, Pastor Vess began to inquire about any other possible existing buildings in Salisbury that could meet the church’s needs. Through a series of contacts, Vess heard from the owners of Kidsports. “I had to work to contain my excitement,” he said. After working out a financial solution that benefitted both parties, Destiny City Church had its new home.

On October 1st, the Destiny City congregation went to work on the building. They took on a major renovation that included the sanctuary, nursery, additional meeting rooms and the pastor’s office. The congregation first met in their new church on the Sunday before Thanksgiving after eight weeks of work. Only one outsider was hired, leaving most of the work to the church members. The church used a grant from Duke Energy to replace the existing lighting affordably and chairs were donated by other churches. An existing indoor children’s playground remains and is a big hit with young church members.

The renovation depleted the church’s finances.  But Vess wasn’t worried. He said, “Our people have learned through our experiences to trust God. We learn to tithe first to Him. The Lord loves a cheerful giver. You can’t out give God.”

Upcoming projects include stabilizing the expansive parking lot and possible restructuring of an existing putt-putt course on site.  Vess said, “We have been so focused on the interior but now we need to think about exterior projects. I am not concerned because our people are so amazing.”

Destiny City will get an opportunity to show off the congregation’s work when they host Dr. Keith Johnson, a motivational speaker with the John Maxwell Group. Vess and Johnson met through another pastor in Macon, Georgia. Vess said, “Dr. Johnson is gaining notoriety. He has had two books on the top 30 best seller list. He is highly sought after and we are pleased to have a speaker of his caliber to join us here in Salisbury.”

Johnson will offer two seminars on Saturday, February 6th. He has spent 18 years speaking internationally on leadership development, confidence building and success in life. During the morning session, 9am to noon, his remarks will be directed to those in church leadership positions. The evening session, from 3 to 5pm, is open to leadership of all genres.

The Sunday morning worship will also feature Dr. Johnson. He is a former pastor, current life coach and operates his own leadership school. The praise and worship service begins at 10:30am. Everyone is welcome.

Ann Farabee: Are you in darkness?