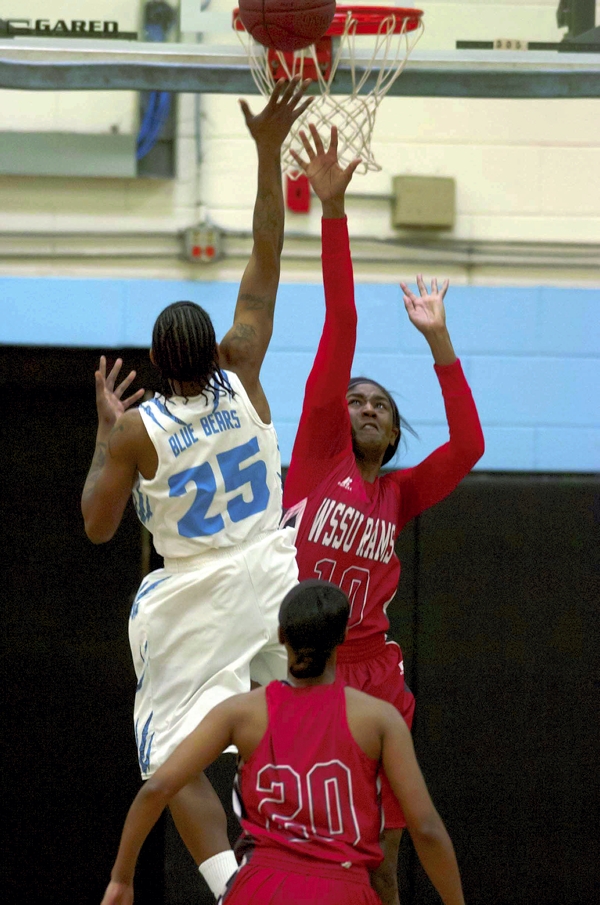 SALISBURY — The Livingstone women’s basketball team scored 51 points less than it did in its last game, but the Blue Bears still found a way to win on Saturday against Winston-Salem State.

Despite trailing for almost the entire game, a defensive struggle where each possession seemed to be a grind, Livingstone edged the Rams, 53-51, in front of a rockin’ New Trent Gym crowd.

Newcomer Ariana De’Jesus streaked down the lane and kissed a runner off the glass with 5.9 seconds left in the game, snapping a 51-51 deadlock.

After a timeout, WSSU was able to get the ball inside to 6-3 post player Kandace Tate, but her layup in traffic would not go down at the buzzer.

“Winston is a good team and coming off a couple of good wins, so for us to shoot as bad as we did and still get the victory … that’s a sign of us coming together as a team,” said Livingstone coach Anita Howard.

Howard was referring to the Blue Bears’ dreadful 28 percent 18-of-65) shooting from the field and 54 percent (13-of-24) from the foul line, just three days after shooting lights out in a 104-58 rout of St. Augustine’s. In that game, Livingstone made 12 of 15 three-point field goals.

“We must have used them all up in that game and should have saved some,” joked Howard after yesterday’s performance. “But we’re not going to shoot 28 percent every game, that’s for sure. Winston-Salem is a strong zone defense team and that slows the tempo down and we like to play a little faster tempo. So, that did hurt us some.

“We were actually moving the ball around a little too much on the perimeter and not looking to attack for too much of the game,” continued Howard. “The ladies do share the ball well and that’s a good thing, but not at the expense of attacking the basket.”

It was obvious from the opening tip that the Blue Bears were out of sync. They fell behind, 7-0, and the student section couldn’t sit down (waiting for the first points) until De’Jesus scored 4:14 into the game. By the first quarter’s end, WSSU was up, 17-9.

The second period didn’t start much better for Livingstone and with six minutes left in the half, the Rams enjoyed their largest lead at 23-11.

That’s about the time some hard contact on the court led to some tempers flaring and it seemed to fire up the Blue Bears. Livingstone got a spark from guard Bria Patterson, who nailed a 3-pointer and had a steal and layup. Amber Curtis, Brittany Taylor and Alexis Fowler also scored points as the Blue Bears went on a 13-2 run to end the half.

In fact, Taylor’s recovery of a loose ball and breakaway layup at the half’s buzzer cut WSSU’s lead to 25-24.

Livingstone fell behind by six points again to start the second half, but began chipping away at the margin. Down by four points, De’Jesus drilled a 3-pointer and then had a steal and reverse layup, giving the Blue Bears their first lead of the game at the 2:21-mark of the third quarter.

The lead was short-lived as WSSU’s Sha’Quira Palmer made three free throws late in the period to regain a 40-37 advantage, heading to the final quarter.

The Rams jumped ahead, 42-37, and may have taken complete control if not for Livingstone’s Zena Lovette, who stroked a 3-pointer just as the shot clock expired.

The teams battled back-and-forth from there, and the final four minutes saw both squads hold two-point leads on several occasions. A steal by Taylor that led to a bucket for Fowler game the Blue Bears a brief lead at 48-46, but Awa Kalmstrom tied it for WSSU with 2:22 left.

Palmer put the Rams back on top, 50-48, with 1:43 remaining, but Lovette sliced to the basket for a layup at the 1:20 mark. Curtis and the Rams’ Jasmine Carter traded free throws in the final 24 seconds before the final play.

Coming out of a timeout, Livingstone inbounded the ball  in the front court and got the ball to De’Jesus, who took off without hesitation for the basket. Her runner was good, sending the home fans into a frenzy.

“In the timeout, Coach told me to attack the basket if I can …  and I just saw the opportunity and I took it,” said De’Jesus. “If the lane hadn’t opened up, to be honest, I was so excited, I don’t even really know what I would have done … but hopefully, it would have been in our favor.”

De’Jesus a junior who just transferred from Pine Manor College (Mass.) this month, is off to a good start for her new team. “I’m just trying to fit in,” she said. “I’m trying to create when I’m on the court and with help from the coaches, hopefully, I can help us win games.”

Curtis, the team’s senior leader, played 28 minutes on a bad ankle and while she didn’t shoot well, had eight rebounds and three steals.

Despite leading most of the game, WSSU did not shoot well either, just 40 percent from floor and 60 percent from the foul line, and also committed 23 turnovers, compared to just 14 for Livingstone.

“Overall, I’m proud of my kids,” said WSSU coach A.G. Hall. “There were some possessions where we didn’t fully execute the way we practiced and I thought that prevented us from winning the game. But we’re playing good basketball right now, as we led for most of the game today. We just need to keep working and polish up some things, so we can finish games.

“Livingstone is a good defensive team and they put a lot of pressure on our one ball handler,” continued Hall. “We’ve got a bigger lineup but that only matters when you’re close to the basket. When they’re picking you up full-court, that can be a little tough on us.”

Prep Basketball: East boys put it together against NWC